The Temporal Lobe: The Center of Memory and Emotions

An injury or change to the temporal lobe can lead to different types of deafness or even depression. Understanding the functions of this part of the brain can help us understand ourselves even better. 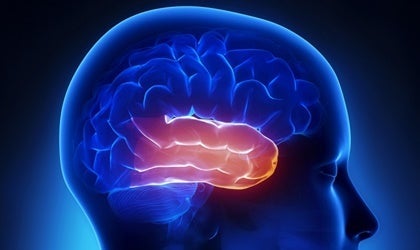 Communicating effectively. Reading and writing. Remembering the kiss your partner gave you this morning. Experiencing sexual desire. Trying to take care of your emotional stability. Knowing how to use a book or an elevator. Getting emotional during a movie. Believe it or not, the temporal lobe is responsible for regulating all of these diverse processes.

Heraclitus said that nothing in nature is stable, that everything changes and flows, including the tissues of the body. There’s one constant though, and that’s the feeling that you’re always the same person. This internal perception of a fixed and invariable self is something that most of us share.

In spite of that feeling, the cells in your body aren’t the only things that are changing and regenerating all the time. Every one of your mental processes, every lesson, experience, sensation, and emotion affect your brain.

The temporal lobe happens to be the area of the brain that supports these changes the most. That’s because it helps you learn, remember, motivate yourself, process information, and form emotional bonds to adapt to your surroundings.

Changes to the temporal lobe

Because the temporal lobe is so important, any injury to that area can have serious consequences. Experts in the field such as Dr. Francisco J. Rubia at the University of Dusseldorf and author of books such as El Cerebro Nos Engaña, ¿Qué Sabes De Tu Cerebro? (In English: Brain Tricks, What Do You Know About Your Brain?) and El Cerebro Espiritual (In English: The Spiritual Brain) explains that damage to the temporal lobe can have even stranger consequences than you might imagine.

Edgar Allan Poe illustrated one of these consequences in his classic work William Wilson. The feeling of having a double is called “autoscopy” and involves temporal lobe damage.

The temporal lobe is more or less where your ears are. It’s separated from the parietal lobe by the lateral sulcus (also known as the Sylvian fissure). Scientists believe that it’s one of the newer parts of the brain because only vertebrates have it.

One interesting fact is that the temporal lobe has more connections with the limbic system than any other lobe in the brain. Consequently, it’s responsible for a large number of processes related to emotions and memory.

The distinct areas and functions of the temporal lobe

The temporal lobe has a right and left hemisphere, just like other brain structures. It also has a series of interconnected structures that enable certain functions. The most well-known and studied are:

Let’s take a more detailed look at where each of these processes takes place.

Perceiving sounds, understanding where they’re coming from, identifying musical sounds, being able to communicate effectively and coherently… The auditory cortex of the temporal lobe mediates all of these processes. This is also a crucial area for human communication.

Wernicke’s area is inside the auditory cortex and enables you to understand spoken language. It’s important to note that this area is only responsible for the comprehension of spoken language. Producing speech and communicating, however, happens in the Broca area.

Reading and writing, decoding symbols, understanding them, connecting graphemes with phonemes… All of these fine-tuned processes require a sophisticated ability to associate visual information with auditory information. This kind of activity takes place in the angular gyrus.

Anticipating what you’ll feel before you touch an object or recognizing said object only through touch are processes that happen in the supramarginal gyrus. This small but powerful structure also makes it possible to experience the gratifying and pleasant sensations you get when you touch someone you love.

As you can tell from its name, the parietal-temporal-occipital association cortex involves the temporal lobe, the parietal lobe, and the occipital lobe. Although scientists don’t yet fully understand this area of the brain, they do believe that it’s associated with the following processes:

As we’ve mentioned above, biologists and neurologists believe that the temporal lobe is one of the newest structures in the brain. It plays a role in communication, reading, writing, and more.

Add to that the connection with the limbic system, which helps control behavior, and you’ll understand both how important this area is and also how serious the consequences can be if the temporal lobe is damaged.

For example, one recent study from the MRC Brain Metabolism Unit at the Royal Edinburgh Hospital found that people with major depression have various alterations in the temporal lobe.

Injury to the temporal lobe has other implications, such as:

In conclusion, the temporal lobe is responsible for countless tasks that help you live your day-to-day life. Thanks to the temporal lobe, you know who you are and you can adapt to your surroundings. It also allows you to carry out distinctly human activities such as writing, reading, and communicating.

Does Your Brain Have a “Happiness Zone”?
A recent study provides new insight into the fascinating function of the human brain. Scientists appear to have found a "happiness zone" in the brain. Read more »
Link copied!
Interesting Articles
Brain
Cognitive Characteristics of an Abuser

The most interesting part of many neuroscience cases is that they often lead to previously unknown knowledge about the brain.…