Forgetting Some Dreams - Why Does It Happen?

Humans are prone to forgetting some dreams while remembering others and this happens shortly after you wake up. The sensations you felt and the loose imagery soon fades away too. Why does it happen? Why doesn't your brain allow you to remember your dream universe? 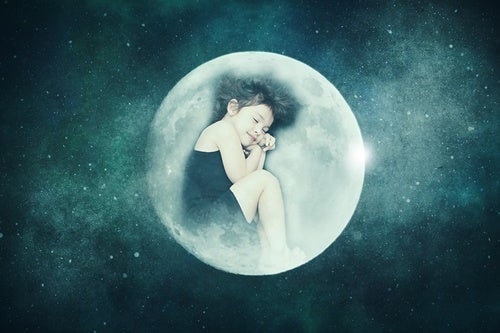 Humans spend a good part of their lives sleeping, immersed in a suggestive dream universe and yet forgetting some dreams. But why does this happen? Regardless of the incredibly intense and almost vivid experiences, they’re gone as soon after you wake up.  Each image, fragment, and memory fade away as smoke subjected to a current of air.

What’s most striking is that, for a brief moment of time, you have the feeling that, if you tried a little harder, you could recover that memory. The bad news is, it’s useless to do so because the only thing that remains is the emotional imprint of the dream itself or, where appropriate, the nightmare.

William Shakespeare said, “Humans are such stuff as dreams are made on”. It’s true, there’s an undeniable truth behind that poetic image. The act of dreaming is a suggestive mix of mental processes that include your memories and lived experiences and, in turn, a few strokes of creativity. A mix of surrealism and fantasy. This is because human beings also have those fabulous resources.

Everyone would love to be able to remember each dream. And the reason for this lies in the classic belief that one could get to know each other a little better by reeling in every image, word, sensation, and events that occurred in that dream.

“The general function of dreams is to try to restore our psychological balance.”

Forgetting some dreams – two reasons why this happens

Some people have the curious virtue of remembering many of their dreams and they seldom hesitate to share them with others. They’re trying, as usual, to evaluate the symbolism and come up with meaningful interpretations. However, others rarely remember anything from their dream universe. These people often claim they don’t dream.

However, you must know that everyone dreams, as it doesn’t only allow you to promote that deep and restful rest that’s so essential for your health, but the brain also needs this process to establish learning, eliminate data that no longer serves you, and carry out metabolic tasks for proper balance. That is, it needs to do a sort of “pruning”.

Thus, as some experts point out, out of the 90 years that someone’s alive, they’ll spend about 30 years sleeping. That is 22 years mired in a deep sleep and seven years dreaming. However, they’ll barely remember anything from those seven years. But why spend time on something that’s so unproductive in content?

The hippocampus doesn’t pay attention to your dreams

When you fall asleep, some of your brain regions remain active. Studies show there are incredibly active areas and, one of them, the one that takes a long time to reduce your activity into rest, is the hippocampus. This area is related to your memory and is responsible for carrying out crucial tasks while you sleep.

What it basically does is pass the relevant information stored in your short-term memory to the area of your ​​long-term memory. The hippocampus is, so to speak, “focused” on very specific tasks. These tasks keep it from paying attention to your dream world. In fact, it doesn’t consider it important. Its work at that moment is to consolidate learning and memories.

In short, what happens in your dreams doesn’t interest your hippocampus that much. At least, this is what various studies revealed, such as this one conducted by Thomas Andrillon, a neuroscientist at Monash University in Melbourne, Australia. Thus, as observed in an MRI, the hippocampus sends information to the cortex, but the latter doesn’t send any back to it.

There are times when you may remember something; an image, a feeling, or even a brief scene. That probability increases if you wake up right after the dream. In these situations, scientists demonstrated that the memory of that dream experience lasts only a minute or two. But you’ll soon forget it again.

Low levels of acetylcholine and noradrenaline

There’s a second reason why humans forget some dreams. That theory (and complementary to the previous one) focuses on two very specific neurotransmitters: acetylcholine and noradrenaline. You must know that the levels of these two substances dramatically decrease in your brain when you fall asleep.

This phenomenon translates into a lower capacity to settle memories. However, there’s still more. Studies show that when you enter the REM phase and cross the threshold of dreams to immerse yourself in its kingdom, the levels of acetylcholine suddenly rise, but the adrenaline levels don’t. Therefore, you would need to have high levels of both neurotransmitters to remember what happens in that oneiric tissue. Only one of them won’t do it.

Why do you forget some of your dreams and remember others?

You already know there are two reasons why you forget some of your dreams. The hippocampus and neurotransmitters noradrenaline and acetylcholine make it difficult to create memories while you sleep. However, experts in the field, such as sleep researcher Ernest Hartmann, professor of psychiatry at the Tufts University School of Medicine, point out there’s another reason that promotes this forgetfulness.

This is because dreams aren’t transcendent to your brain. These have no utility for its proper function. Actually, when you do remember them, it’s only for a very striking reason; that is to say, they have an emotional component. The more intense they are and the more consistent their narrative, the more likely you are to remember them.

To conclude, dreams remain an enigma that still attracts humans. Both Freud and Carl Jung considered them indispensable to get to know humans better. However, the brain itself discards information and you go on forgetting some dreams. Ironically, your brain isn’t as interested in them as you are.

Dreams Originate in the “Hot Zone” in Your Brain
A research team from the United States, Italy, and Switzerland have discovered what they call the "hot zone" of the brain that turns on when we dream. Read more »
Link copied!
Interesting Articles
Curiosities
Countries Where the Death Penalty Is Still Enforced