Lesions in the parietal lobe can prevent you from getting dressed and even finding your way home. This area of ​​your brain is key to interacting with everything around you. 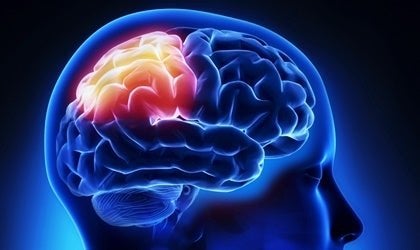 Feeling a caress or the intensity of a hug. Dancing. Finding your way around a new city. Seeing an object and suddenly remembering a happy moment from your past… These and many other types of occurrences related to sensations, memories, and spatial orientation are governed by a very important area of y​​our brain: the parietal lobe.

Every so often, neuroscientists surprise us with new discoveries about the five lobew or regions, in our brains. One of the most fascinating areas of the brain is the one located just behind the frontal lobe. Its importance lies, above all, in the fact that it’s the home of most of our perceptual processes.

David Eagleman, one of the most renowned neurologists nowadays, reminds us in his book Incognito that we don’t perceive things as they really are. You see reality as your brain wants to see it. The parietal lobe is an area that most of the information from other brain areas passes through. It’s your brain’s organizer, and is the area that allows you to feel and understand the real world around you.

“What would happen if I told you that the world around you, with its rich colors, textures, sounds, and aromas is an illusion, a spectacle that your brain has created for you? If you could perceive reality as it is, you would be surprised by its colorless, odorless, and tasteless silence. Outside your brain, there’s only energy and matter.”

In turn, it’s separated from the other areas through the parieto-occipital fissure (which separates it from the frontal lobe) and the Silvana fissure, which establishes a boundary with the temporal lobe. It’s also interesting to note that each area of ​​your brain is lateralized. This means that some cognitive processes are specialized to one hemisphere or the other.

The name parietal derives from the Latin word for “wall”. It symbolizes the intermediate structure located in the center of your brain which establishes a symbolic limit. This is a border where infinite information, processes, and connections cross and communicate with each other.

To understand the complexity and relevance of this area a little better, let’s have a look at its structure.

Functions of the parietal lobe

As we pointed out, the parietal lobe participates in all the sensory and perceptual processes that are very important in your day to day life. An illustrative example of what this structure allows you to do is when you trace a letter on your skin and you’re able to recognize it.

This is something that, in essence, seems so simple, and yet it involves some very complex processes. You need to first feel the touch on your skin, then recognize the movements, and, finally, associate that feeling and the movements with a letter of the alphabet. Fascinating as all of this is, its functions don’t end there. Let’s see some more tasks that this area allows us to do:

Thanks to the parietal lobe you can:

Studies such as those conducted at Temple University, United States, in 2008, reveal one of the latest discoveries regarding the parietal lobe. Thanks to advances in neuroimaging techniques, the parietal lobe has been shown to be key for short term, as well as episodic, memory.

Lesions in the parietal lobe

People with traumatic or organic damage in the parietal lobes (following a stroke, for example) have serious difficulties when recognizing their own bodies. They also have problems with personal orientation, manipulating or picking up objects, drawing, and cleaning, among other things. Therefore, apraxias (the inability to carry out commands and movements) and agnosias (the inability to process sensory information) are very common.

Aphasias (language problems), as well as ataxias (problems with bodily and even visual coordination), are also very common in this type of brain injury in the temporal lobe.

To conclude, we could define the parietal lobe as a type of home for your sensory processes. Your ability to move and interact with your surroundings and the people around you totally depend on this area.