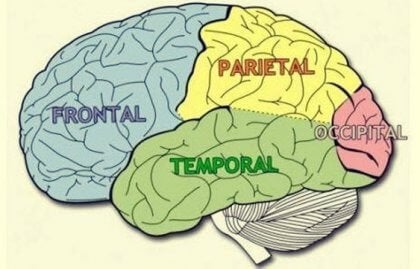 Everything we are is in our brain. This amazing and immensely complex organ is a reflection of our successful evolutionary history as a species. The human brain is categorized into four different cerebral lobes. Our conscience resides in these lobes. We also create language, store our memory, and regulate emotions and many other processes in these cerebral lobes.

Famous Portuguese neurologist Antonio Damasio explains in his book Looking for Espinoza that the brain is more than a simple bundle of neurons. In fact, comparing this organ to a computer may still not cut it. The brain and each of its structures are a direct result of our interaction with our environment.

“The eye must concentrate, grasp the subject, and the brain will find a means to express it.”

We are what we see, feel, experience, and the way we react to stimuli and circumstances. The brain takes shape with every experience. The cerebral lobes are the ones in charge of the processes in function of the characteristics. Identifying each one of the processes will allow us to have a better and more complete understanding of the human brain.

Cerebral lobes and their functions

When we think of cerebral lobes, we tend to make the mistake of imagining separate structures that are independent of one another. This is why it’s important to understand that there are no internal barriers between them. The four large areas that make up the brain always work in harmony and share information constantly.

On the other hand, although each cerebral lobe has its individual characteristics, this doesn’t mean that each one controls a specific task almost exclusively. Many activities and processes overlap in different cerebral regions.

This means that one area couldn’t function without the involvement of another. This is why, in the case of brain damage to a specific area, its functions can be compensated by another area. This may or may not affect the efficiency of the processes.

Moreover, even investigators disagree on where one lobe begins and the other ends. However, what they do agree on is that there are two clear hemispheres: the right and left.

The frontal lobe is a clear result of our evolution. It’s located just behind the skull, near the forehead. It makes up the most acute part of our brain, the one that took the longest to evolve. Here are some of the diverse tasks this lobe is responsible for:

Among the other four cerebral lobes, the occipital lobe is the smallest but also the most interesting. It’s close to the neck and doesn’t have a concrete function. It’s almost like a path all the other mental processes have to walk on to reorganize and connect to other areas.

This lobe is located right next to the temples and regulates a lot of processes. As evidence suggests, associating a specific specialized task to a specific lobe is difficult. They all depend on each other and they interconnect and work together in harmony. The tasks that take place in the temporal lobe are:

Throughout the article, we’ve talked about the four cerebral lobes. From a neuroanatomical standpoint, many studies suggest that the brain has a fifth region known as the insular cortex. It’s a hidden lobe under the other four cerebral lobes. It’s a remote and complex area that shares space with diverse veins and arteries.

We don’t yet know much about the insular cortex. Nonetheless, experts have seen different processes and alterations in patients that suffer epilepsy and have damage in this particular area of the brain. This cortex participates in taste, control of visceral functions, and self-awareness. Since it’s part of the limbic system, it may also help control emotions.

The cerebral lobe limits are blurred

In conclusion, as evidence suggests, the cerebral lobes make up a fascinating map of the processes and connections in the brain. But it’s difficult to establish clear functional limits. The most interesting lobe is definitely the frontal lobe since it’s responsible for executive functions. In fact, it’s responsible for important processes such as planning or stimuli control.

The Limbic System: What Is It and How Does It Work?
The limbic system is referred to by many as the "emotional brain". But what else does it do? And what exactly is it? Read more »
Link copied!
Interesting Articles
Culture
Can't Find Meaning in Your Life? It’s Time to Meet Sartre!

Jean-Paul Sartre (1908-1950) was a highly acclaimed and celebrated French philosopher. An avid reader of the great classics, he was…

No doubt you've heard of histamine or antihistamines before. These two substances are directly related to allergies and allergy treatment.…