The Digital Gap - What Is It?

The digital gap, like other forms of inequality, is a starting point for designation in other areas, such as work. But what are the consequences of this gap? And, what are its most immediate and concrete consequences? 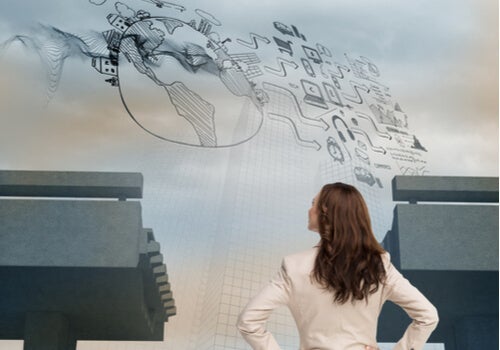 This article is about “the digital gap”. Pretty much from the end of the 20th century until the beginning of the 21st century, there have been remarkable technological advances. However, is everyone on board?

Kofi Annan, former UN Secretary-General said: “Information and communication technologies aren’t a panacea or magic formula, but they can improve the lives of everyone on this planet“.

The digital gap refers to the separation that exists between people who use Information and Communication Technology (ICT) and those who don’t. It’s good because they can’t and good because they don’t know. In today’s article, you’ll learn more about this concept, along with the problems it entails and the possible ways of solving it.

Technological innovations aren’t usually disseminated by the system. That is, not all companies or individuals become users and there are even less advanced users. Thus, cultural and economic differences in underdeveloped countries mean that only 10% of the population has access to the Internet. The figure in industrialized countries is 58%.

As you can see, the majority of the population has little knowledge regarding this process. One that opens doors to greater development and comfort in all aspects of your daily routine. This is because technology is a key tool for the development and advancement of human lives.

Inequalities are particularly visible in:

The first and second digital gap

The key is understanding that the most difficult barrier isn’t related to access, but use. This is because technological innovations depend on their impact on people’s lives and how they use them. Thus, it’s crucial for each individual to use technology depending on their needs and interests.

Internet access isn’t enough, as people should have digital skills because they’re necessary for their personal and professional lives. Mainly, in societies that value the growth of information and knowledge.

One point worth highlighting is that of gender inequality regarding digital skills. While the first digital divide has a clear generational and educational component, the second digital divide affects women mostly. Thus, the concern about gender differences when it comes to computers and Internet use is growing. Unfortunately, it’s a difficult one to resolve.

Problems related to the digital gap

From a social perspective, when an important part of the population doesn’t have access to all crucial technology, new economic and social inequalities arise. In addition, this reinforces any previously existing ones.

Similarly, there are two opposite poles in new technologies and they clearly impact the labor market:

Thus, the countries that can’t take advantage of information and communications technology (ICT) lose competitiveness. In addition, the differences between those who have access and those who don’t within the same country create a new gap in the labor market. In it, the privileged ones get to enter and choose their job, for the most part.

Is there a solution?

The good part is that there are many advantages to technology progress. For example:

For these and many other reasons, countries must eliminate the digital gap through public policies and democratize access to ICTs.

A reduction of the digital divide reduces inequality and gives more people the opportunity to learn and find better jobs.

Digital Detox: Connecting with The Real World
Given the digital era we live in, undergoing a digital detox to disconnect from technology in order to connect with ourselves is a great idea. Read more »
Link copied!
Interesting Articles
Curiosities
Blue Monday: The Saddest Day of the Year?

Curiosities
All about Freedom of Expression