How to Adapt to the Gig Economy

The gig economy is expanding. When it's well managed, it represents an adequate work modality. However, when mishandled, it can lead to job insecurity and loss of labor rights. 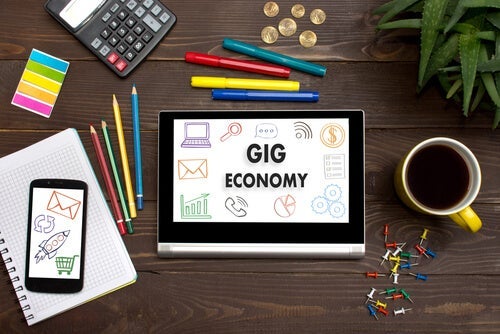 The world has changed a lot. In many aspects of life, transformation is faster than our ability to assimilate it. One of the most disconcerting changes is the one we now know as the “gig economy”.

The gig economy is a new way of working. Its main characteristics are the recurrent use of short-term employment contracts for small activities.

Evidently, this has made it hard to find stable and durable jobs. Of course, in such conditions, it’s pretty difficult to come up with an individual medium or long-term life project since there’s a lot of work-related uncertainty.

For some people, this is one of the greatest forms of job insecurity. Honestly, they have all the right to think so. On the other hand, other people think the gig economy is an unstoppable dynamic which most employers will end up following in the near future. It’s an irreversible change that forces you to put a twist on vital projects. These people are also right.

The gig economy model is ideal for employers. First of all, they don’t have to deal with their workers’ social security expenses. On top of that, this new modality allows them to respond strictly to the law of supply and demand, and not to the obligations imposed by labor legislation.

For the workers, however, the picture is quite different. In some cases, it could be an ideal condition, as this would give them more independence. As long as they’re being paid fairly for the sporadic jobs they do, it’s good business. Otherwise, it’d be a way to degrade an employee’s work and income.

As of today, work is a commodity. The workforce is bought and sold on the market. This refers to a modality which came alongside with technology and surprised many employees. Many people are still debating on this subject.

Most of those who decided to try the gig economy did so because it’s better to have some kind of income than to be unemployed and broke. However, several institutions are starting to warn people about the risks of this new model.

The International Labor Organization (ILO) has been really attentive in this regard. They point out that the main risk of this model is that it leads to a progressive loss of the labor rights conquered by old generations. And not only that, but they also state that the workers are very likely to feel overwhelmed by uncertainty, which may lead to health issues.

The main issue here is that the gig economy has already become a great source of occupation. If it didn’t exist, there would probably be a lot more unemployment. This, in turn, is the worst form of precariousness in a worker’s life. Thus, this seems to be a solutionless paradox.

Adapting to a new model

With all the technological advances and new financial dynamics in the world, it’s unlikely that we’ll return to the labor model people followed in the past. To generate employment, entrepreneurs need the market to offer employees certain security as well. That being said, in many cases, companies have stopped working in a certain niche and, instead, they’ve started developing short-term projects which, of course, have exacerbated uncertainty in the working community.

However, this doesn’t mean that the businesses and companies’ progress must be based on degrading working conditions for the employees. Taking the latest technological advances into consideration, it’s more than clear that both must undertake an adaptation process to them. Additionally, it’ll also be necessary for the company to modify its legislation.

It’s important to be flexible and open but also to define boundaries. We’re barely seeing the start of the gig economy and we’re sure it’s going to continue growing as time goes by. In this sense, all workers must analyze it and come up with the healthiest way to adapt and take advantage of this dynamic.

The Importance of an Emotional Salary at Work
Money isn't the only thing that keeps people satisfied with their jobs. Emotional salary is also gaining popularity in today's workplaces. Read more »
Link copied!
Interesting Articles
Work
Work Overload and Its Consequences

Work overload is common these days as many people devote a lot of their time to it. They do so…

The work environment is more competitive every day. In addition, it's become hard to select the right candidate for each…

Coaching and Leadership
The Advantages of Autocratic Leadership

Work
What Not to Ask Candidates during a Job Interview

While you're preparing a job interview, you need to consider the questions you're going to ask the candidates. Since you…

There are three keys to effective leadership that everyone should master. You don't have to be the CEO of a…