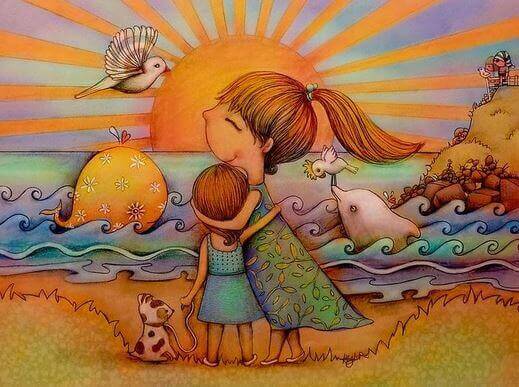 Emotions play a determining role when it comes time to transform children into happy and successful adults. However, if the emotional development of a child is interrupted or derailed in some way, that child will suffer a great variety of personal and social problems throughout his or her life.

Being responsible for children’s emotional education is not an easy task. Making a child understand that feelings have as many tonalities as colors, though they might not see them, is something very complicated, to say the least.

Emotional awareness as a foundation for child strength

Emotional awareness is fundamental to wellbeing. So, we have to be conscious of what’s provoking frustrating and negative or positive and pleasant feelings in order to be able to find the ways to encourage, understand and control them.

It’s important for children to develop emotional intelligence and the ability to communicate effectively about their emotions, in order that they can have a strong sense of inner and social self as adults.

Teaching children to observe, communicate and learn about their emotions will help their development and success in life. In fact, we’ll avoid making them vulnerable to others’ conflicts.

The importance of emotional communication

Suggestions for promoting these skills in children can be found in the book “Emotional Intelligence for Children” by Shapiro Lawrence:

Martin is a six-year-old child whose parents were going through a particularly nasty divorce. Martin’s father insisted that the child fly over to visit him in Boston every weekend, while his mother maintained custody during the week in Richmond, Virginia. Martin barely uttered a word during the two and a half hour long trips and insisted on going to bed as soon as he arrived at any of his two homes. After two months of this ordeal, Martin started complaining of stomach pains and his teacher pointed out that he very rarely talked to anyone at school.

During the custody hearing, Martin’s lawyer asked him:

– How do you feel about visiting your father every weekend?

– Well, are you happy to see your father when you go to Boston? – asked his lawyer, controlling his own emotions and trying not to guide Martin into giving any specific answer.

– I don’t know- he answered again, with a monotonous barely audible voice.

– What about your mother? Are you happy living with her during the week? – inquired the lawyer, realizing that he would only obtain one answer from Martin throughout the hearing.

– I don’t know- said Martin once more, and nothing in his behavior suggested that he did know.

If we deprive our children of the healthy emotional development, they’ll be unable to understand and decode their feelings and emotions.

Just as we could clearly see in the example, this causes great suffering in our children. And the child’s ability to translate his emotions into words is indispensable for the satisfaction of his basic needs. If we teach children to express themselves emotionally, they’ll slowly become strong children.

Words that describe emotions are directly connected to feelings and the physiological and emotional expression of them (for example, a child must know that anguish is associated with a mild acceleration of the pulse, a rise in blood pressure and great tension throughout the whole body.)

We must cultivate emotional language in children

If children grow in an environment that suppresses feelings and avoids emotional communication, it’s likely that the children will grow up as emotionally mute people.
So, while it’s never too late to learn the language of emotions, those who learn to speak it from an early age are the ones who express themselves with the most clarity. They have more self awareness and in turn can relate better with others. Which, in turn, opens the doors of success to them and helps them achieve their aspirations.
Therefore, we have a moral “obligation” to cultivate this vital aspect in our children. Because only by raising strong children will we avoid having to repair so many broken adults. Broken by solitude, distrust and lovelessness towards themselves and towards society.
Link copied!
Interesting Articles
Psychology
Imposing People - Between Narcissism and Weakness

Psychology
The Power of Positive Emotions

Emotions are an innate part of our lives and yet we often don't pay nearly enough attention to them. For…

People say that the past never stops happening, and they're not wrong. Every day in our lives is the fruit…

Emotions have an adaptive and evolutionary value, as science has been able to demonstrate it. Studies by Barbara L. Fredrickson,…