Self-destructive adaptation happens when you normalize pain. You're convinced there's no way out. However, a passive attitude only damages and breaks your spirit. 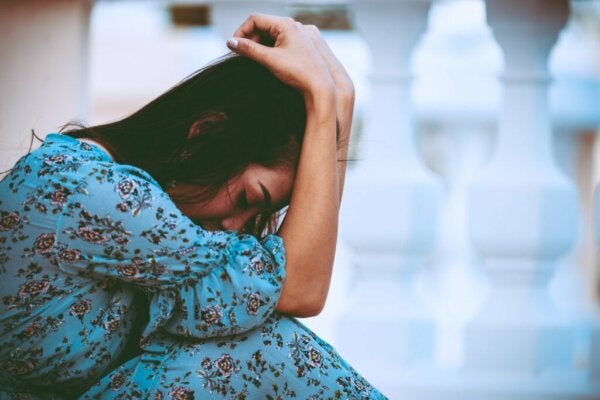 Usually, it hurts to prick a finger with a thorn. But what happens when you don’t pull it out? You know it’s there and yet the pain is different now. So much so that you can even keep it there for a while before you finally decide to pull it out. This is precisely what self-destructive adaptation is about in human relationships.

People can normalize suffering in striking and unsuspected ways. Furthermore, most peoples don’t know to what extent their innate ability to adapt goes. In fact, you can appreciate this in work environments. For instance, when people spend decades in a position that tramples their rights. Perhaps one in which they must put up with harassment.

Do people tolerate such treatment for the salary? It could be. However, self-destructive adaptation often goes beyond finances. People often stay in that denigrating position because “it is what it is”. After all, “work is so unbearable they even pay you to do so”. Thus, a person adapts without feeling the weight of the psychological fracture this entails through such verbalizations and excuses.

Self-destructive adaptation goes beyond mere masochism and is part of a series of realities worth knowing about.

“I will no longer mutilate and destroy myself in order to find a secret behind the ruins.”

Self-destructive adaptation – normalizing what hurts you

Psychology has been studying this phenomenon for many years. It’s quite striking and inexplicable when seen from an outsider’s perspective. Self-destructive and unregulated behaviors could be understood from only one point of view: one in which a person gets something in return.

For example, all addictive behaviors, such as the use of alcohol or drugs, are harmful. However, a person gets pleasure in return so it turns into a self-destructive addiction. The same goes for practices such as self-injury. In this case, physical pain acts as an outlet for emotional pain.

So what’s the explanation behind a person who continues to stay in an unhappy relationship? Why do they stay even though their significant other continuously cheats on them? What’s the benefit to someone who stays in a job they hate?

You must go back to the basics to understand some of the causes that often mediate self-destructive adaptation. In other words, take a look at the human personality. It may surprise you, although there’s a profile that’s oriented towards these harmful practices to the point of normalizing them. Theodore Millon, a pioneering psychologist in personality research, was the first person to speak about this:

For Theodore Millon, self-destructive adaptation was often a trait of borderline personality disorder.

In a study conducted by Dr. Otto Kernberg, he defined some of its characteristics:

When pain is the only thing you’ve ever known

Seeing how someone tolerates pain to unsuspected limits doesn’t cease to upset many of those around them. However, you must understand them before passing any judgments.

For instance, imagine someone who was physically and psychologically abused during their childhood. This is a person who understood that love is sometimes accompanied by humiliation at an early age. They think that anyone who loves you is bound to hurt you.

Something like this undoubtedly explains why many people tolerate pain and don’t shy away from it.

Self-destructive adaptation and fear of change

“Who will ever love me if I leave this relationship?” “What will I do if I quit my job? There are no opportunities for me out there.” Resistance to change in humans is a factor most people pay little attention to. There are times when it’s so pathologically ingrained it impairs your potential and well-being.

In those situations, the fear of change is more terrifying than anything else you can experience. Self-destructive adaptation tends to normalize pain and humiliation and there’s no other way of life. In these situations, it’s essential to always have a good support network.

Breaking the web of self-destructive adaptation requires healthy self-esteem. Also, you must establish a distance from which to see what’s happening, from the outside. Having someone who can help you is essential. However, it all depends on you. It’s your decision and should be your conviction not to tolerate the intolerable because you don’t deserve it.

The Invisible Pain of Trauma
People often deal with the invisible pain of trauma on their own. We know that trauma leaves a mark, and can make people's day-to-day lives very difficult. Read more »
Link copied!
Interesting Articles
Personality Psychology
Serendipity and Personality: The People Who Make Valuable Discoveries