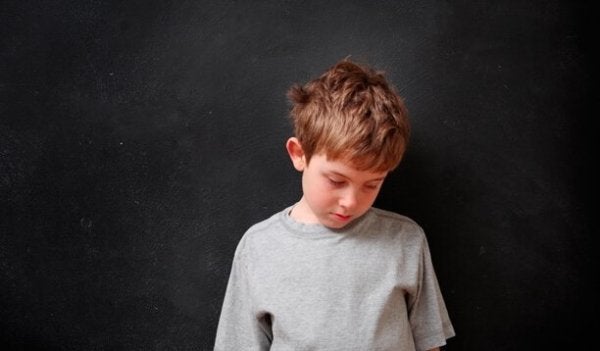 Fortunately, awareness of the countless terrible consequences of domestic abuse is growing. Experts have pointed out the physical harm and even risk of death that many women live with every day.  We also know that physical abuse isn’t the only thing that hurts.

Psychological harm is another consequence of abuse. And this is not only true for the victim. It’s important to keep in mind that children also suffer in situations of domestic abuse.

They are the silent witnesses to a violent, out-of-control situation. So often, children end of feeling guilty for what’s happening. But how does this affect them on a psychological level?

“Abuse is defined as any behavior that is designed to control and subjugate another human being through the use of fear, humiliation and verbal or physical assaults.”

The consequences of domestic abuse on attachment

When children are born, they are born with a variety of needs. Some of these are protection, parental love, stability, and socialization. If these needs are satisfied properly and consistently, they trust in their parents’ love. They also come to believe that they deserve it.

In situations where one parent is abusing another, children and their needs are very vulnerable. It’s very hard for a child to feel secure in this kind of environment. It’s also unlikely that they’ll be able to trust the their parents or that they will take care of them. The adults usually aren’t emotionally available or able to love them as they deserve. Instead, they’re just a source of negative feelings and emotions.

Parents should provide their children a safe space. They should be a refuge when their children need it. Their sons and daughters should see them as a safe starting place to go out and explore the world.

But what actually happens in situations of domestic abuse is that they spread their fear to their children. Children see how their parent is afraid in their own home. They cry and yell and cannot be consoled.

As a result, the attachment that children in these abusive situations usually form with their parents is insecure or avoidant attachment. In addition, abused mothers might see their children negatively and consider themselves bad mothers. Sometimes this results in postpartum depression.

How does abuse affect a child’s development?

Domestic abuse doesn’t just hinder the development of a secure attachment (so important for a child’s well-being). It also has consequences on a child’s normal psychological development. As you can imagine, exposure to abuse at an early age influences their social and emotional well-being.

Additionally, they may have trouble identifying and managing their emotions. Children often feel like they are to blame for the situation. They might also have anxiety, even though they may not understand what they’re feeling or why. Then they try to suppress these negative emotions, turning them into a chronic problem.

Experts have also seen significant self-esteem and self-image problems in children exposed to abuse. There may be behavioral and socialization problems. They may have trouble relating to their peers as well as other adults.

Children exposed to abusive situations may suffer from post-traumatic stress disorder. Though they aren’t the ones being abused, they are indeed indirect victims. You might wonder what PTSD looks like in children. As with other health problems (physical and mental), the symptoms are not the same. The illnesses manifest themselves differently in adults than in children.

In fact, psychologists see that children exposed to domestic abuse have flashbacks of traumatic events. It may happen while they’re playing if something triggers memories of what they experienced. They might have nightmares, flashbacks, or dissociation.

Children from homes like this might be hesitant to take on responsibilities. In other words, they distance themselves socially. They might forget skills they had already learned, not play as much, and overall not be as social.

Lastly, children who have witnessed domestic abuse will likely be anxious. As a result, they may have trouble falling sleep or concentrating. They may seem hyper-vigilant and tend to overreact to stimuli.

In conclusion, it is vital for a child’s well-being to make sure they get therapy from a qualified psychologist. Living with indirect abuse can be extremely damaging for children. Let’s help them get the help they need to grow into healthy, happy adults.

Men Are Also Victims of Domestic Violence
When we talk about domestic violence, we automatically think of men abusing women. This is normal, because this type of violence is more visible and also Read more »
Link copied!
Interesting Articles
Social Psychology
The Characteristics of Frugal People

Have you heard the term "Frugal Four" recently? It mainly refers to certain countries such as Austria, Denmark, Sweden, and…

Psychology
How to Train Your Brain to Be More Creative

Are you someone who believes that being more creative is overrated? Or do you think that humanity needs great ideas?…