Pythagoras's discipline of silence is supposed to calm the mind by taking control of your words. This wise man from Crotone believed that it was the way to immerse yourself in an individual's essence, with no artifice. 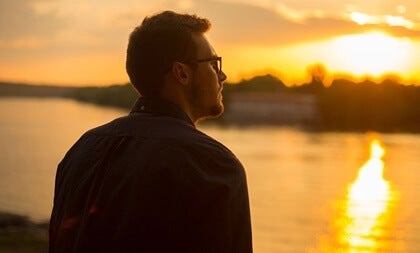 The goal of Pythagoras’s discipline of silence is to develop a more reflexive mind by taking control of your words. With these kinds of ascetic practices, the wise man from Crotone taught hundreds of men and women to detach themselves from the sensory world in order to be in touch with themselves and achieve true wisdom.

Pythagoras of Samos introduced this idea to the Western world more than 2500 years ago. The renowned Greek mathematician and philosopher had spent two decades of his life in Egypt learning under the tutelage of several hierophants in Thebes and Memphis. Later, he went to Babylon to study astrology and the principles of karma and meditation.

All of the knowledge he acquired was enormously helpful when he decided to open his famous school in Crotone. Pythagoras instituted only one rule for admission: prospective students had to have spent five years in total silence. For students who already had serene and centered personalities, two years in silence was enough.

Writings from philosophers who were contemporaries of Pythagoras tell us that the school admitted more than 200 students. These were men and women who wanted to understand all the mysteries and wisdom that Pythagoras’s school had to offer. It’s interesting to think about this educational experience in the modern context because, as we all know, silence isn’t necessarily a part of schools today.

Over the years, we’ve almost completely lost touch with one of Pythagoras’s most valuable lessons: silence is one of the best ways to learn how to discipline yourself.

“Be silent or let they words be worth more than silence.”

What’s the discipline of silence?

The basic principle that governs the discipline of silence stems from an essential fact. Pythagoras believed that the most difficult thing for people to control is their tongues. This part of our bodies is often the main cause of the problems and personal tragedies that bring people suffering.

In his books, Thomas Stanley, the first historian of philosophy, writes that Empedocles, a politician from the 5th century BC, believed that we would be a more noble society if we were able to follow Pythagoras’ lessons. Not only that, but he described Pythagoras as someone who seemed to have lived twenty lives.

To Pythagoras, we owe pure mathematics, the term “philosophy” and the creation of the Crotone school, which would later serve as a model for modern universities. In that institution, they introduced their students to scientific and philosophical teaching as well as music and astronomy. Nevertheless, to have access to that knowledge, you first had to “purify” yourself.

This rite of passage was conducted in the following way:

The difficult discipline of silence

Pythagoras’s discipline of silence required students to live five years in total silence. That requirement was reduced to two if you were already a serene and balanced person. Pythagoras believed that, through silence, the human soul could detach itself from any artifice or external object and return home.

How to apply Pythagoras’ discipline of silence in today’s world

We know that it’s nearly impossible to achieve Pythagoras’s discipline of silence today. Taking a five-year vow of silence isn’t something many people could or would want to do. Nevertheless, studies like this one conducted by the Department of Psychiatry at Harvard Medical School points out something important.

If you could be silent for half an hour to an hour a day, your brain would be healthier and you’d be less stressed, more centered, and in a better mood.

Thus, it isn’t a bad idea to consider this suggestion, along with some other recommendations that Pythagoras made in his time about health and well-being.

In conclusion, Pythagoras’s discipline of silence is like the man himself: a legacy that teaches, inspires, and prompts reflection. It’s a good idea to remember what he said long ago to his students: “Silence is the first stone of the temple of wisdom”.

Healthy Habits
Caring for the Pelvic Floor with Kegel Exercises

Holding on to things can be very dangerous and harmful. Clinging to the safety of what you know or what…