Merlin: Biography of a Legend

Merlin is one of the protagonists of Celtic mythology, as well as innumerable literary and cinematographic pieces. Several clues suggest his story is real, although a bit distorted by popular imagination. 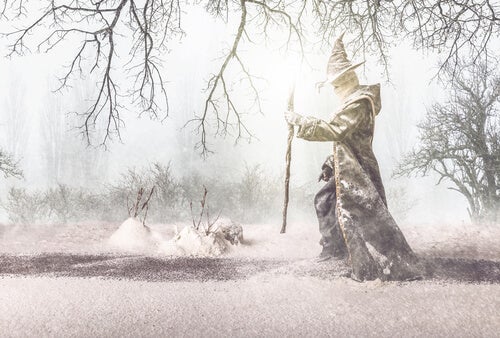 Merlin is the most famous wizard in history. Until now, there’s no absolute certainty that he actually existed, but many literary texts and historic books often mention him. However, according to experts, there’s more certainty about Merlin’s existence than King Arthur’s.

Whether he existed or not, the truth is that there are innumerable legends around him, which makes it even harder to build a reliable timeline of his life. Still, Merlin is a fabulous character, with an imaginative and mysterious aura. He appears in many medieval England stories and myths.

“Those who don’t believe in magic will never find it.”

From a historical point of view, the first person to introduce Merlin into the British tradition was Lailoken, a poet who lived in South Scotland. Gildas the Wise is also another source of this character since he used to tell Ambrosius Aurelianus’ deeds. This last character, Ambrosius Aurelianus, is believed to be King Arthur, and Gildas associated him with the figure of Merlin.

The origins of Merlin

Most legends involving Merlin point out that he was an innately evil being, and that he had come into the world to do harm. However, when he grew up, Merlin used all his powers wisely, and became a wise man and advisor of kings.

Some texts claim that Merlin was the son of a demon and a nun. Other versions say that the wizard’s mother was actually a witch from the forest or a woman who had conceived without a man.

Based on the little historic data available, the most accepted version is that Merlin’s real name was Myrddin Emrys. He was the illegitimate son of one of Britain’s kings, Ambrosius Aurelianus, who would then go down in history as King Arthur. But of course, there’s no absolute certainty about these claims.

King Arthur’s story, an enigmatic character just like Merlin, is related to that of the wizard. People say that only thanks to the guide of the famous enchanter, he was able to govern wisely and fairly. But let’s not get ahead of ourselves.

It all started when the king of Britain fell madly in love with a married woman. Taking advantage of the fact that her husband was a soldier who was fighting in a war, Merlin intervened so that the king looked like the absent husband and was able to spend the night with the woman. Eventually, the husband died and the king married her. They promised Merlin that they would give him their first child, Arthur, and so they did.

When he was very young, and with Merlin’s help, Arthur managed to draw the sword Excalibur from the stone it was inserted in, and that’s how he became the Great King. Arthur then founded the castle called Camelot and governed under the wizard’s guide, who kept him company and advised him in many situations.

What happened to the wizard?

The classical legend points out that Merlin fell deeply in love with a young lady when he was an old man. He taught her all his magic secrets in exchange for her to be his lover. Merlin built her a palace at a lake and called her the Lady of the Lake. With time, she started fearing him once she knew about his evil origins.

Merlin himself taught her how to trap a man. The Lady of the Lake then imprisoned him in a crystal cage. She could go in and out of it, but he couldn’t. The legend says that he stayed there forever and is still waiting for someone to set him free.

Historian John Matthews suggested another version of the story. According to him, the legend of Merlin is inspired by a warrior called Myrddin, who lived in Scotland and was the leader of the Picts tribe. In the year 573, Merlin faced with great courage an invasion coming from Ireland, in a bloody battle. Unfortunately, he saw his family die during the battle.

After that, the warrior went crazy and went to live like a hermit in the woods. He had unconventional habits; that’s what gave way to his wizard reputation, and many legends were born around him. Probably, Merlin was a disgraced hero whose story changed little by little due to people’s imagination.

Daedalus: Greek Mythology’s Great Inventor
Daedalus is most famous for building the Minotaur's labyrinth, but he's also the protagonist of many other ancient Greek tales thanks to his talents. Read more »
Link copied!
Interesting Articles
Cinema, Television, and Psychology
Lessons from Zootopia: A Movie about Tolerance and Personal Growth

Culture
5 Reasons Why it's Not Worth Being a Pessimist

Alejandra Pizarnik's quotes show a poet endowed with an impressive sensibility and out-of-the-ordinary lucidity. This artist was the daughter of…