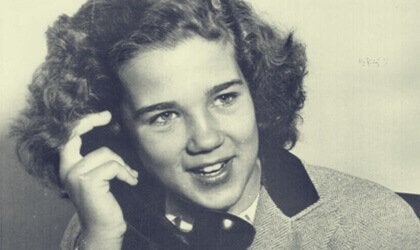 Sally Horner was 11 years old when a pedophile, Frank La Salle, kidnapped her. He was fresh out of prison. He held her captive for 21 months until she managed to escape and call her family. This dark and very tragic story inspired Vladimir Nabokov to write one of the most famous literature novels of all times: Lolita (1955)

Few books tell a story with so many contradictions. The literary quality is undeniable, just like the framed atmosphere of an impossible journey between a middle-aged man and a girl. The story makes us witness the depraved, shallow, and turbid nature of the American society.

Its main character, Humbert Humbert (a word that hints to the French term ‘ombre’ which means shadow) is a very unrelatable character. He’s a man who escaped Europe because he abused a child. Humbert Humbert ends up luring his victim, Lolita, into the same universe of shadows. In this universe, he satisfies his fascination with ‘lolitas’ or young teenagers.

Nabokov’s book wasn’t subtle nor did it hide anything. In fact, the author didn’t want it that way. With Humbert, he tried to show the world the profile of the most classic pervert. The rawness of the story is undeniable and uncomfortable. However, it’s very easy to surrender to the story, where we’re shown nothing else than a pedophile kidnapping an 11-year-old. A story that, unfortunately, was very real.

“A sentimentalist may be a perfect brute in his free time. A sensitive person is never a cruel person.”

The story of the real Lolita, Sally Horner

Frank La Salle was a 52-year-old mechanic that was known for abusing girls between the ages of 12 and 14. He had just gotten out of prison when he decided to settle down in New Jersey and start over. However, it’s not easy for these types of men to hold back the predator that lives inside them. They only listen to their instincts. So, in March of 1948, La Salle went back to his old ways after obsessing about a girl named Sally Horner.

Sally was a widow’s daughter and it was common to see her leave school with her friends. Just like any other girl her age, she was fearless, trustful, and very naive. She didn’t notice that someone was stalking her. La Salle followed her until he finally got the chance to satisfy his desires once more.

Sally had just stolen a 5-cent notebook from a store because her friends told her it was the only way they’d let her join their group. Frank La Salle caught her outside the store and told her that he was an FBI agent. He also told her that if she didn’t want her mother to find out what she had done, she had to follow him. Sally, filled with fear and regret, agreed to go with him.

They both got on a bus and that’s when it all started. They spent about two years traveling the country and visiting cities like Atlantic City, Baltimore, Dallas, and California. This journey took them from hotels and motels to camp grounds. They always told people they were father and daughter.

The rescue and the tragedy after it

Nobody suspected anything. Nobody thought anything of that obsessive father who never lost sight of his daughter, except a guest at a hotel who was intrigued by Sally’s sad and scared demeanor. This guest managed to get her away from La Salle to ask her if she was okay. Sally asked for his help. She just wanted to call her family.

The police didn’t take long to get there. Sally was finally able to come back home. When she did, she told the whole story of what had happened, including the sexual abuse and the humiliation and fear she felt. Frank La Salle was sentenced to 35 years in prison by a judge who called him a “moral leper”.

Nabokov and a pedophile’s journey

All these details have been collected in the book The Real Lolita: the Kidnapping of Sally Horner and the Novel that Scandalized the World by journalist Sarah Weinman. It’s a long and detailed investigation where the similarities between Sally and Lolita are exposed.

The book seeked justice for Sally Horner and all the children who go through the same thing. These are heartbreaking stories we only see on the news for short periods of time.

Similarly, the author also talks about Nabokov’s novel. We must remember that when Nabokov finished writing Lolita, he didn’t find a publisher in the United States willing to publish his book. This is because it was an uncomfortable book to read.

However, a French publisher who specialized in pornographic content decided to go ahead and publish the book. There was also controversy surrounding Stanley Kubrik’s film. Gray Grant, for example, refused to interpret Humbert Humbert. And even James Mason regretted accepting the part.

Even in newer versions of Lolita, editors try to avoid showing the teenager’s shameless side. This is because the book in some way hints that it was all her fault. Now we no longer find that suggestive teen with heart-shaped sunglasses on the cover of the book. Instead, we see a young girl who who was the victim of a child molester, just like Sally Horner was.

The consequences of sexual abuse in childhood
Sexual abuse of children takes place when there is sexual contact, with or without consent, between an adult and a minor. Read more »
Link copied!
Interesting Articles
Literature and Psychology
The Myth of Eros and Psyche