Hypersensitivity is Due to Psychological Insecurity

There's psychological insecurity behind a susceptible, fragile person to whom everything hurts, bothers, and frustrates. Thus, they must learn to manage their emotions. 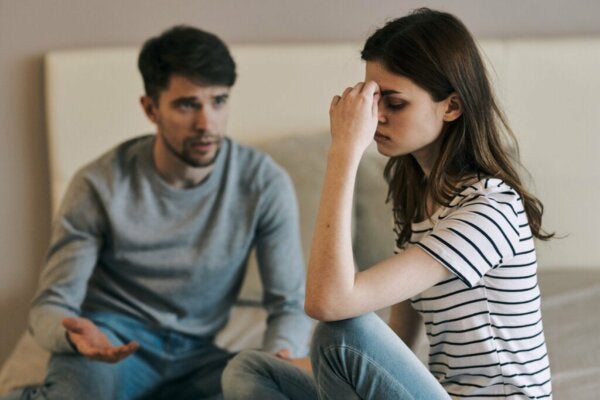 Those who share space with these types of people are well aware of how complex these interactions are. However, you must try to understand them instead of judging them. Keep in mind that every person can, at any given time, display this kind of reactive behavior. This is because a stressful experience would be enough trigger to do so.

Vulnerability and psychological insecurity are behind those who are angry at the world and sort of offended by excessive happiness. They’re broken and need to pull themselves together. Understanding this reality can help a person deal better with these characters and also understand themselves a little better.

“Often those that criticise others reveal what he himself lacks.”

Psychological insecurity is behind hypersensitivity

The field of psychology has long been studying susceptibility. As we pointed out at the beginning, it’s a symptom of a deeper reality, rather than a dimension of its own. However, in your daily dealings with people, you’re only left with the behavior of those who’re easily offended, some for no reason at all.

However, work such as that conducted at the University of Psychology of Ruhr-Universität Bochum, in Germany, reveals something important. Everyone’s environment is an influence on them but the same one doesn’t affect every person in the same way. Highly insecure people have a greater tendency towards certain psychological disorders.

Actually, this reactivity may be due to genetic factors. It may be that the brain experiences an alteration in the production of serotonin. Thus, there’s a greater tendency to discourage and to always be in a state of alertness and defensiveness. In other words, one can’t rule out a biological factor. However, hypersensitivity responds to a deficit in emotional management and psychological skills on average.

Personal insecurity is an emotional reaction to a negative self-perception. This feeling sets in when people don’t trust their competencies to thrive in the world. In other words, when they feel at a disadvantage or don’t appreciate themselves as they should.

This combination of low self-esteem and the feeling of frailty directs their focus on the need to protect themselves, hence their defensive attitude. They feel damaged, offended, and even threatened by the behavior of others at the slightest opportunity. It’s as if everything stuck to them.

Likewise, the person defined by hypersensitivity doesn’t trust others either. This chronic insecurity makes them believe that others will surely let them down at some point.

Why is it that some people are hypersensitive while others aren’t? Well, there’s another interesting theory worth considering in addition to the aforementioned low self-esteem. The differential susceptibility hypothesis describes how some people are more sensitive to stress, due to their biological, temperamental, or behavioral characteristics.

Studies, such as the one conducted at Birkbeck University in London, indicate that some people are more susceptible to environmental stressors. In contrast, some people worry about everything, overestimate any situation, and feel overwhelmed by almost anything. This hypersensitivity produces a high level of distress and may have a biological trigger in certain situations.

Traumatic experiences yet to overcome

As we mentioned above, susceptibility is, in most cases, the symptom of some unattended psychological reality. For that reason, anyone can experience them at any given moment, even though such reactions and behaviors are annoying and problematic.

It’s normal to feel susceptible when you’re going through a complicated, painful, and even traumatic moment. This is because hypersensitivity is a wound that hurts upon contact. It’s the reaction of those who feel trapped by distress, incomprehension, and loneliness.

Sometimes, it involves reacting negatively to others when you feel bad about yourself. These are realities you aren’t willing to confront and, thus, haven’t learned to manage.

It may involve reacting negatively to others whenever you feel bad about yourself, for example. These are unaddressed unmanaged realities that become encapsulated and hurt at the slightest touch, at any word or expression from others.

As you can imagine, anyone can go through a similar situation. This is because this dimension can be either innate or acquired. In fact, the first refers to the aforementioned hypothesis of susceptibility, which has a genetic origin. The second arises as a reaction to complex experiences or to a childhood based on hyper-demand or lack of attachment.

How to deal with susceptibility

People almost always worry about how to deal with psychologically insecure people. However, what if it’s you who’s annoyed, offended, and basically hypersensitive to nearly everything? Well, you could approach it in the following way, if so:

On average, hypersensitivity is a trait people acquire in childhood. Thus, don’t hesitate to ask for psychological help if it hinders your well-being and relationship with your environment.

3 Signs of Insecurity in Love
In your relationship, you should be able to express and be yourself. If this isn't possible, then you might end up experiencing insecurity in love. Read more »
Link copied!
Interesting Articles
Social Psychology
The Burden of Other Peoples' Projections: Labels