How Do Antidepressants Work?

What are antidepressants? How do they work? Are they really effective? Find out more in this article. 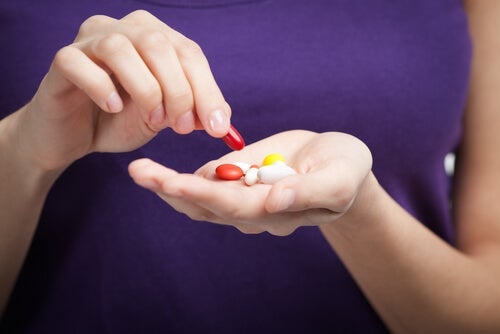 The goal of anti-depression medications is to correct chemical imbalances in the brain that scientists believe are responsible for mood and behavior changes. First developed in the 1950s, their use has become increasingly common in the last 20 years.

We should be aware that antidepressants don’t start working as soon as we take them. In fact, in many cases, it can take several weeks for the person to begin to notice their effects.

Research suggests that anti-depression medications may be useful for people with moderate to severe depression. Studies have shown that they’re more effective than a placebo in people with depression. They aren’t usually recommended for mild depression, unless other alternatives, such as therapy, have failed.

The Royal College of Psychiatrists estimates that between 50 and 65% of people treated with an anti-depression medication will see some improvement, compared to 25 to 30% of people who take a placebo.

How do antidepressants work?

If we’re honest, experts aren’t completely sure how some antidepressants work. Most anti-depression medications work by increasing the levels of specific neurotransmitters in the brain. What they usually do is prevent these neurotransmitters from being recaptured from the intersynaptic space.

This means that they remain in the synapses for longer, causing more activity, and, as a result, they “compensate” for reduced levels. This way, antidepressants make the remaining neurotransmitters work more effectively, thus normalizing the overall activity to some degree.

However, this doesn’t really explain how antidepressants end up relieving depression symptoms. Neurotransmitters are like the basic elements to building something much more complex. It’s the same as the individual numbers in larger figures or the letters of our language. That’s why increasing the levels of neurotransmitters throughout the brain doesn’t really tell us too much.

On one hand, anti-depression medications increase the activity of neurotransmitters almost immediately. However, the therapeutic effects usually take weeks for the patient to notice them at a subjective level.

How different medications work against depression

Many researchers believe that the benefits of antidepressants stem from how they affect certain brain circuits by modifying the neurotransmitter levels. We’re talking here about serotonin, dopamine, and norepinephrine.

Different types of anti-depression medications seem to affect the level of these neurotransmitters in various ways. Let’s see how they do it.

Some of the most commonly prescribed antidepressants are called reuptake inhibitors (RI). Reuptake is the process in which neurotransmitters are naturally reabsorbed into the brain’s nerve cells after being released to send messages among the nerve cells.

A reuptake inhibitor prevents this from happening. Instead of reabsorbing, the neurotransmitter remains, at least temporarily, in the gap between the nerves. This is called the intersynaptic space.

Theoretically, the benefit of these medications is that they maintain high levels of certain neurotransmitters. This could improve communication between nerve cells, thus strengthening the brain circuits that regulate our moods.

There are different types of reuptake inhibitors depending on the different neurotransmitters they target. These include:

Tetracyclics are another class of antidepressants that, even though they affect the neurotransmitters, they don’t prevent reuptake in the same way. Instead, they seem to prevent neurotransmitters from binding to specific receptors in the nerves. Because norepinephrine and serotonin don’t bind to the receptors, they seemingly accumulate between nerve cells. As a result, neurotransmitter levels increase.

These medications for depression seem to act in two ways. On one hand, they prevent the reuptake of serotonin. On the other, they prevent the serotonin particles that the brain releases in the synapse from binding to certain unwanted receptors. Instead, they redirect them to other receptors that can help nerve cells function better in the neuronal circuits that are responsible for our moods.

These medications were among the first that doctors prescribed for depression. Although they’re effective, they can have quite serious side effects, especially if you take an overdose. These days, many doctors only resort to these medications when new and better-tolerated medications haven’t had any effects.

However, tricyclics and MAOIs (monoamine oxidase inhibitors) can sometimes be very useful for people with treatment-resistant depression or other certain forms of depression, such as depression that’s accompanied by high anxiety levels.

Tricyclic antidepressants also prevent the reuptake of neurotransmitters, but do so non-selectively. One of their main functions is to work on the serotonin, norepinephrine, and dopamine levels all at the same time. Although these medications are clearly effective in treating depression, they’re currently being replaced by more specific medications.

Monoamine oxidase inhibitors (MAOIs) block the effects of monoamine oxidase, a natural enzyme that breaks down serotonin, epinephrine, and dopamine. As a result, the levels of these neurotransmitters could increase.

The drawback is that MAOIs also prevent the body’s ability to break down other medications metabolized by this enzyme. As a result, this increases the risk of high blood pressure, as well as the levels of an amino acid called tyrosine, found in certain foods, such as meats and cured cheeses.

MAOIs should also not be combined with other medications that can increase serotonin (such as certain medications for migraines or other antidepressants). This is because they can cause an excessive accumulation of serotonin, called “serotonin syndrome”, which could be life-threatening.

A lot of what scientists believe about antidepressants today is still speculative. They don’t really know if low levels of serotonin or other neurotransmitters cause depression. They also aren’t sure if increasing those levels will solve it. Perhaps we still don’t know enough about brain chemistry to be able to know when there’s a balance or imbalance.

It’s possible that antidepressants have other unknown effects as well. Their benefits may not have as much to do with neurotransmitter levels as with other effects, such as the regulation of genes that control the growth and function of nerve cells.

This may not seem overly reassuring. However, although experts don’t have all the answers about how antidepressants work, we do know that they can work. A lot of research has confirmed that antidepressants do indeed help many people feel better, and that’s the important thing.

Mood Disorders – Beyond Depression
Although most of us think of depression, the truth is there are many mood disorders. So, in this article, we'll try to deepen on some that we often forget. Read more »
Link copied!
Interesting Articles
Treatments
White Noise to Help People Sleep Better