Cleopatra and the Decline of the Pharaohs

Cleopatra, the Egyptian queen and lover of Julius Caesar and Mark Antony, is the last representative of one of the most powerful dynasties. of all time. 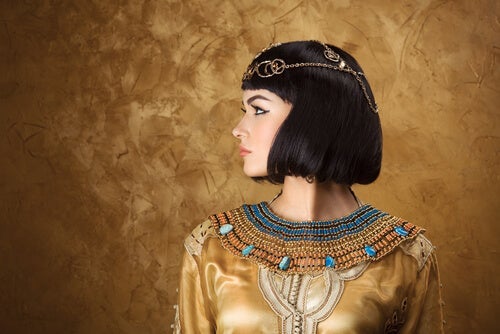 Cleopatra was already around during Augustus’ ruling. (He was the first Roman emperor, and many consider him to be the father of political propaganda. However, the Greeks and Egyptians practiced it as well, so he wasn’t. However, nobody before him did it in such an effective way).

The circle of writers of Maecenas, a friend of the emperor, had many victims, but none so famous as Queen Cleopatra. The legend of the exotic tyrant, with her magical seduction skills, permeated Roman historiography. In contrast with this perspective, there’s another more modern one that arose from her supposed romantic relationship with Mark Antony, a Roman general.

Historians still don’t know which part of the legend is true and which part is an exaggeration. In any case, Cleopatra definitely became a central figure in Roman politics by using every weapon at her disposal.

Political opportunities presented to whoever had the audacity to seek them in the twilight of the Roman Republic. All at the mercy of its internal crises, external successes, and power struggles among great men. Cleopatra’s beauty, intelligence, power, and wealth were the four aces she resorted to.

“As a famous historian once said, in all its history, Rome deigned to fear two people; one was Hannibal, the other was a woman.”

The Mediterranean under Rome

Macedonians took the country of the Nile almost three hundred years before Cleopatra’s era. A Greek-Egyptian syncretic culture and a dynasty, the Ligidae, to which she belongs, arose from this.

Therefore, centuries went by and a new power rose in the Mare Nostrum: Rome. Cleopatra was born to a pharaoh, Ptolemy XII, in 69 B.C. He got to the throne despite being born out of wedlock. Rome allowed this situation to contain the ambitions of neighboring Syria, which wanted Egyptian wheat.

However, the famous Pompey the Great, a Roman general, conquered Syria. Cleopatra’s father could only keep himself on the throne through bribes, among others to Julius Caesar, during her childhood.

As the rivalry between Pompey and Caesar grew, the rest of the political personalities of the moment were positioning themselves towards one or the other. Cleopatra and her brother-spouse, Ptolemy XIII, joined Pompey after the death of their father, following the Egyptian tradition.

The confrontation, first political and then military, was won by Caesar and the once allied Egyptians betrayed and killed Pompey.

When the winner arrived at Alexandria, he decided to mediate in the treacherous palace policy. The court had been divided among the supporters of each husband. Then, despite Caesar’s equanimity, the people of Ptolemy tried to kill him. The defeat of the Egyptians was absolute. When the king died, Cleopatra married her next brother, Ptolemy the XIV.

The truth is that the Roman general had spent every night with the intriguing queen since his arrival. Together, they toured the country for the next three months. As you can see, the danger of losing Rome to his rivals, Pompey’s followers, was secondary at that point.

There’s been talk of love for the queen, but what she must have loved most was the grain she saved on her barges after the harvest. Likewise, the main attraction of the old Roman man for the young woman must’ve been her growing power in the Republic. They had offspring during this time, a boy named Caesarion.

At the death of Caesar (stabbed by Brutus and other senators) his chosen heir was Octavian Augustus and not Caesarion. Along with Mark Anthony and Lepidus, the three followers of Caesar avenged his death and split Rome among themselves.

A new lord appeared in the Eastern Mediterranean and, thus, a new challenge for Cleopatra, if she intended to keep her influence. Egypt had prospered greatly under Cleopatra’s rule. It was neither Cleopatra’s beauty nor her ability to seduce that made Mark Antony fall in love with her but her wealth.

Luxury was a must for ruling in the East, unlike in the austere Rome, and Cleopatra and Mark Antony embraced it with enthusiasm.

They set up a court in Alexandria (where they formed a deified couple, Isis and Dionysus) appealing not only to the tradition of the Lagids but also to that of the ancient pharaohs. Antony won the East but lost Rome. Then, the propaganda of Octavius was unleashed, and the Egyptian witch clouded the straight mind of the formerly sharp Roman general.

Augustus’ message curdled and soon he was able to declare war for the absolute power of Rome. Firstly, Antony committed suicide. Later, Cleopatra did as well when she became captive. Caesarion was killed, and there were no more heirs. Thus, the children of the suicidal couple stayed under the care of Octavius’ family, who raised them to serve his purposes.

Politics engulfed the queen after a life of political scheming. Nevertheless, she rose from the progressive irrelevance of her family to nearly become the most powerful woman in her lifetime. Contrary to what she wanted to draw, her real goal was always the survival of her family and her country.