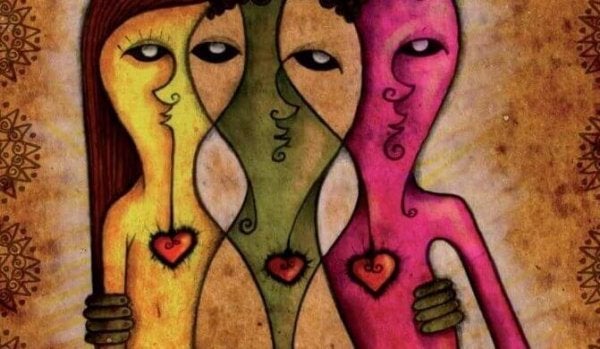 There are many myths about polyamory. Unfortunately, many people believe them to be true. However, studies show 5% of people in North America are in non-monogamous relationships. With that in mind, it’s important to make a little effort to find clear answers to certain questions.

Oscar Wilde famously said that “to love oneself is the beginning of a lifelong romance.” So is it possible to share that love with more than one person? And can that shared love be romantic love, not like the love one feels for a sibling or a parent? Or is polyamory itself actually the biggest myth of all the myths about the concept? Let’s take a look.

“I’ve been through it all and nothing works better than to have someone you love hold you.”

Just like we said at the beginning, there are plenty of ideas about polyamory that reign in the collective conscious and unconscious. Most of these ideas are myths. In fact, in the last few years, we’ve started to hear more arguments against monogamy. For example, Dr. Eric Anderson believes that monogamy in humans isn’t natural. He thinks that monogamy is nothing more than a cultural norm.

So let’s dismantle some of these myths. Some people think that someone who practices polyamory still has a primary partner. They’re in a relationship, but still see other people.

Psychologist Bjarne Holmes believes that this is a myth. According to his research, this is true in only 30% of relationships between three or more people. In fact, most of the groups don’t usually have a noticeable hierarchy. There are no primary or secondary lovers.

Human beings are monogamous by nature

This is another myth, according to Judit Eve Lipton and David P. Barash. In several books on the subject, they argue that, contrary to popular belief, human nature isn’t monogamous.

This pair of scientists believe that human beings are going against the laws of nature. It would seem that we are made to be polygamous, like most other animals. However, we try to maintain this exclusive social relationship between one man and one woman, even though this isn’t our true evolutionary inclination.

This is another myth that psychologists like Melissa Mitchell like to dismantle. In fact, this particular psychologist believes that this is a completely unfounded prejudice. At least, that’s the idea that she gets from her research.

The search for second or third companions has nothing to do with feeling dissatisfaction with the first partner. In fact, these types of polyamorous relationships are usually pretty independent from each other.

Let’s get to the bottom of another myth about polyamory. In this case, if we look at the teachings of Tristan Taormino, we see that polygamous relationships aren’t more or less dysfunctional than monogamous ones. Taormino draws this conclusion from a series of studies that include standard psychological tests.

In fact, studies show that people who gravitate towards open relationships tend to be more creative and less conformist. In other words, these people are drawn to complexity, invention, unconventional ideas, and chaos. But they don’t display any signs of psychological problems.

Polyamory is bad for children

This is another myth that is easy to debunk. Many people think that these relationships are especially harmful to children. They believe that these little ones will not develop properly.

To address this question, Professor Elizabeth Sheff interviewed children raised in polyamorous families. Her subjects ranged from 5 to 17 years of age. Her results? Far from being damaging to children, polyamory actually has advantages. The adults have more help to take care of the children, and the children always have a trustworthy adult around to play with and confide in.

Again, we look to Tristan Taormino’s thesis. He concludes that non-monogamous people aren’t confused nor are they afraid of commitment. In fact, the truth is just the opposite. People who practice polyamory tend to understand very clearly what they want and how they want it.

Polyamory is just an excuse to be promiscuous

This is another myth that Taormino debunks in his book. This time, he addresses the idea of promiscuity. Taormino states that there’s nothing really wrong with an active sex life with two or more people.

After reading all of this, do you still believe in what people say about polyamory? Science is slowly dismantling many of these long-held beliefs and also opening up the floor to debate. The truth is that many scientists believe that there’s good reason to think that human beings are capable of loving more than one person.

“That love is all there is, is all we know of love.”

What Is Polyamory?
Have you ever felt like you were in love with two or more people at the same time? Have you ever heard of polyamory? Read more »
Link copied!
Interesting Articles
Personality Psychology
Conscientiousness - Self-Discipline and the Road to Success

Psychology
Dear Life, I Am Going to Live With Passion