Agatha Christie's quotes reflect the impressive clarity and realism that made it possible for the author to make a name for herself in a profession that was, at the time, almost exclusively reserved for men. 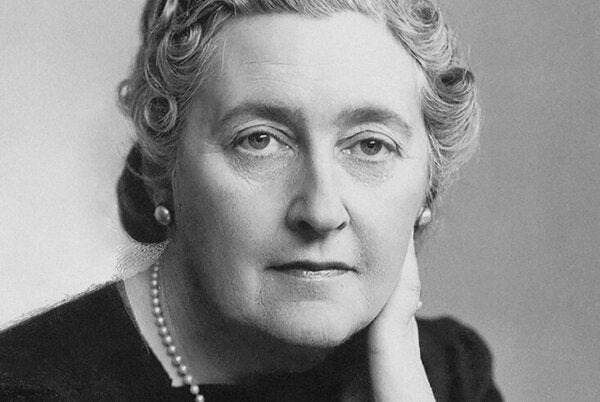 These Agatha Christie quotes are a reflection of this famous author’s sharp intelligence and wit. The British novelist is one of the best-selling authors of all time. She’s in the Guinness Book of World Records for having sold over two billion novels.

Crime and mystery are the pillars of her novels. She knew how to grab the reader’s attention from the very first line of the novel and hold it until the final period. This creative prowess shines through in the quotes we’ll share with you today.

Christie’s novels were sometimes so plausible that the M15 once investigated her. Her book N or M? contained information that led them to believe Christie knew something about Hitler’s plans.

Let’s take a look at some of Agatha Christie’s famous quotes.

“Evil isn’t something superhuman. It’s something less than human.”

Some Agatha Christie quotes show her wit and excellent sense of humor. This one, for example: “An archaeologist is the best husband a woman can have. The older she gets, the more interested he is in her”.

The British novelist tested this theory for herself by marrying archeologist Max Mallowan. Their marriage was a happy one, and lasted until Christie’s death in 1972. It was her second marriage. The first had been tumultuous.

2. An Agatha Christie quote about punishment

This is a wonderful quote. Without meaning to, perhaps, Christie has synthesized one of the key principles of psychoanalysis. She said, “Evil never goes unpunished, Monsieur. But the punishment is sometimes secret”. This is an astute statement.

If an individual is aware of their actions and breaks the law, or violates some kind of moral or ethical code, the punishment is a reality that imposes itself on their life. It’s possible that there won’t be any external punishment, but the evil act will trigger circumstances that force the evildoer to make amends in some way.

This is another quote that illustrates her great sense of humor. She said, “The most reasonable thing that has been said about marriage and about celibacy is this: whatever you do, you will regret it”

In her statement, she puts things in order. No decision is perfectly right, or completely wrong. Every path you choose has its pros and cons. There’s no way to make sure that the outcomes of your choice will be 100% positive.

4. Be careful what you say

Like any good detective novelist, Agatha Christie knew that loose lips sink ships. If you’re going to tell a lie and not give yourself away with contradictions and inconsistencies, you need to have a good memory, concentration skills, and a creative mind.

She communicates that idea in this quote: “There’s nothing so dangerous for anyone who has something to hide as a conversation!” If you have information and you’re trying to conceal it, the worst thing you could do is participate in a conversation about that very subject.

Some of Agatha Christie’s sayings are poetic and wise. The following is one example of that: “I learned (what I suppose I really knew already) that one can never go back, that one should not ever try to go back – that the essence of life is going forward. Life is really a one-way street, isn’t it?”

Though Agatha Christie’s life wasn’t difficult, per se, she did go through some experiences that tested her limits. After living through hard times, she probably reached the conclusion that she expresses above.

Humility is one of the great human virtues. It comes from the Latin word “humus”, which means “earth”. To be humble is to have your feet firmly on the ground, and to remember that neither your triumphs nor your follies completely define you.

Agatha Christie has something to say on the subject: “I have always been so sure – too sure. But now I am very humble and I say like a little child: “I do not know…”. Christie recognizes the importance of admitting your own shortcomings, and that it’s something that she had to learn over time.

7. The source of inspiration

One of the most difficult, and even scandalous, times in Agatha Christie’s life was when her first husband asked for a divorce. He wanted the dissolve the marriage because he was in love with another woman. To this day, we don’t know if the news gave Christie a nervous breakdown. What we do know is that she disappeared for 11 days, and then she was admitted to a psychiatric hospital.

Right after that happened, however, her career started to take off. She rebuilt her life and was much happier than before. Christie knew that life could be difficult, which is why she was able to keep on living. She said: “I like living. I have sometimes been wildly, despairingly, actually miserable, racked with sorrow; but through it all I still know quite certainly that just to be alive is a grand thing”.

In conclusion, Agatha Christie created a fantastic world, with immortal and iconic characters, such as the famous detective Hercules Poirot. Though her chosen genre, detective fiction, isn’t the most recognized in the literary world, her name will certainly live on forever.

Link copied!
Interesting Articles
Literature and Psychology
What I Learned from Reading Murakami