The Movie 1917: Anguish in a Single Sequence

The movie 1917 was one of the great candidates for the most coveted Oscar of best film. However, despite the support of the critics, it had to settle for the more technical award. In this article, we'll analyze some of the main points of the film. 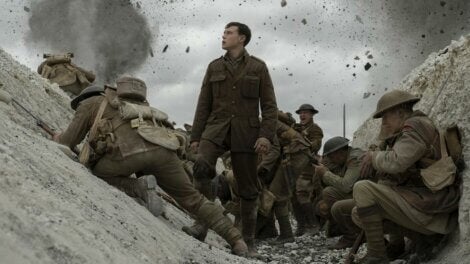 The movie 1917 started off as one of the great favorites to win the most prized award at the Oscars. However, it had to settle for technical awards. Parasite was, without a doubt, a true revelation, and the film that ended up making history and winning the most-coveted awards.

Talent understands neither languages nor borders, and we’ve seen that clearly with the historic award for the best film going to a South Korean film. But in this article, we’re going to talk about the movie 1917. It was one of the favorites for the Oscars, but, in the end, won more awards in the BAFTAs and the Golden Globes.

A somewhat forgotten past

There have been countless feature films about World War II and even about Vietnam, but not many about World War I have resonated as much with people all over the world. Perhaps one of the best known is Paths of Glory by the unforgettable Stanley Kubrick, starring the recently deceased Kirk Douglas.

World War I generates more questions than World War II and doesn’t have as much movie potential. Perhaps it’s because it’s not so clear who the enemy was. Maybe it was because of its chaotic nature, which made it difficult to portray in movies. Anyone who thinks of war films will undoubtedly start quoting movies in which the clear enemy is none other than Nazism.

Inspired by some stories had heard from his grandfather, Sam Mendes dared to immerse himself in the trenches of World War I with a simple plot and a sublime mise-en-scene.

A joke can be told in many different ways and, depending on who tells it and how they tell it, it will either make us laugh or fall flat. This statement, as simple as it may seem, can also be applied to cinema and, ultimately, to art in general.

The message is fundamental, there’s no doubt about it. If the background story doesn’t catch our imagination, then you can’t do much about it. However, just like with jokes, the way we tell the story is fundamental.

The story behind the film couldn’t be simpler. Two ordinary soldiers in the British army have to pass on a message to one of their comrades in order to avoid a massacre at the hands of the enemy.

That’s when something as simple as a message can be brought to life and win the empathy of the audience. The spectators keep a deathly silence as their hearts and nerves are on edge in the face of the imminent threat of death.

The film has a cast that includes some of the greats of British cinema of recent decades, such as Colin Firth and Benedict Cumberbatch. However, the director decided to leave the bulk of the acting to two rather unknown young actors.

It’s true that another type of storytelling would have allowed him to look at other secondary characters in more detail, including the actors we’ve just mentioned. However, the decision to rely on a small number of main actors brings the spectators right into the action.

The trenches have never been so shocking, so poetic, and so suffocating at the same time. The spectator can perceive the terror, the loneliness, and the desolation. And all this is thanks to an impeccable technique that’s rooted in suspense. How can this be possible? Thanks to the use of an eternal yet illusory sequence shot.

The movie 1917 and its unique sequence shot

It’s not that 1917 invented something new here. Hitchcock himself experimented with the technique in Rope in 1948. This title has been followed by more recent ones, such as Birdman (Joaquin Oristell, 2015) or Victoria (Sebastian Schipper, 2015).

In this way, the movie 1917 combines and explores the possibilities offered by new technology with a technique that we’ve seen on other occasions. Its successful implementation gets the viewer fully involved with the main characters and helps them to perceive it all in “real-time”.

Both the acting and technical work require a much greater effort. Because, when shooting scenes like this, everything has to be perfectly measured and calculated to the millimeter, even the atmospheric conditions.

The illusion of the sequence shot, with its millimetric and almost imperceptible cuts, gives us, as spectators, that feeling of anguish. We’re no longer passive spectators of a tragedy, but accomplices. Since the protagonists can’t escape, neither can we. In this sense, the use of natural light, spaces, faces, and subtle special effects emphasize the action.

Trapped in the trenches

The spectator ends up feeling trapped in the labyrinth of the trenches, empathizing with the protagonists and feeling the fear that’s so clearly presented in front of their eyes.

Music and images create a chilling beauty in which energy is the key. The camera never looks back, never regresses, but advances with the movement of the characters. The music also appears at the moments of greatest tension, reminding us, in part, of Hitchcock.

The complexity of the movie 1917 lies precisely in how difficult it is to take advantage of natural resources, chiaroscuro (contrasting light and shadow), natural light, and the immediacy it seeks to convey. Not to mention a team that has managed to recreate a hostile scenario full of trenches in which countless young people were dying. All of them recruited for a war that, like all wars, was both absurd and abhorrent.

1917 is a cinematic experience

The feeling of watching a film without cuts, even if it’s an illusion, creates uncertainty in the spectator. An uncertainty that’s tragically sustained by the longest, most evident, and meditated cut in the film.

After the main character is shot, everything goes black – an eternal black that, far from bringing us relief, increases our anguish. Is it all over? Will we now see normal scenes full of cuts? No, absolutely not, the drastic cut only serves as a temporary full stop, before continuing to tell the story which still has so much to say, and which still needs to show us more intense suffocating scenes.

The movie received ten nominations but only won three Oscars; they were all technical awards, but still highly important. A film is nothing without a solid script, but it doesn’t come to life just because of the script. From its wardrobe to its music, from its acting to its photography. A film is a complex art, an arduous project in which all the elements are important and fundamental.

This is probably one of my least impartial articles, but, as in all criticism and art, taste plays a fundamental role. I’m not a fan of war films that turn anti-war, but I’m a great admirer of Mendes and Roger Deakins (the genius in charge of photography in 1917).

Mendes captivated me with American Beauty. He hypnotized me and took me right into a film that, even though it didn’t have too many surprises, still grabbed me and continues to fascinate me to this very day. He managed to show me beauty in a plastic bag, and now he has managed to overwhelm me and find beauty in a tremendously hostile environment.

All these scenes exist to tell us something that we already know and that cinema has repeated on infinite occasions – that wars are absurd, human beings are absurd, and yet nature continues.

Living out these suffocating scenes, while, at the same time, seeing the cherry tree blossom has never been so significant. Seeing death where nature comes to life, or seeing human destruction in such a natural environment that struggles to flourish is poetic, cathartic, and revealing.

A lesson in humility

Nature acts as one more character in this film. It’s far away from human beings, and yet omnipresent. In this movie, the tree comes forth as its most significant symbol. It’s present at both the beginning and the end of the movie, making it a truly cyclical experience.

And yet, beyond all these fascinating technicalities, the movie 1917 is a lesson in humanity. It’s a clear homage to those who lived through the Great War – to those who saw death in their hands and their hopes buried in mud.

Six Academy Awards Films You Must Watch
The hangover from the latest Academy Awards gala makes it a good time to remember award-winning films. Every winner has made history in their own way. Read more »
Link copied!
Interesting Articles
Cinema, Television, and Psychology
Transsexuality in Cinema: From Glen or Glenda to The Danish Girl