When it seems like all horror movies are the same now, it's necessary to take a look back and watch some classics. Rosemary's Baby provides an imperishable vision of supernatural horror that leaves its viewers feeling uncertain and baffled. 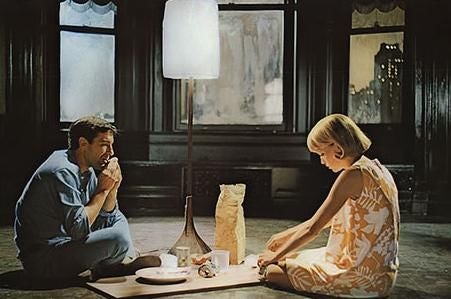 Rosemary’s Baby is probably one of the most recognized films of filmmaker Roman Polanski. The reason why this film is so popular is, first off, its cinematic quality and, secondly, the mysteries that enveloped it shocked the public at the time.

The building where this movie unfolds is very famous because, just a little over a decade later, John Lennon was killed there.

Rosemary’s Baby is a film that still arouses horror and mystery among the public to this day. Additionally, Polanski is one of the most controversial filmmakers due to the legal problems he’s had to face in his life. Despite that, his cinematic legacy will always stand.

Let’s talk about what the film is about. A young couple, extraordinarily peculiar neighbors, and a tragic pregnancy are some key aspects of the film. Rosemary and her husband immerse themselves in the task of finding a home and starting a family. The ambitions of Rosemary’s husband exceed the family expectations which, consequently, force the marriage to dive into an unideal situation.

In short, Rosemary’s Baby is a feature film that takes us along a journey between fantasy and rationality; a journey full of traps, misadventures, and claustrophobia. All of this, though, is what makes it one of the most acclaimed horror movies of all time.

Uncertainty: A major key for terror

Although the film was famous all around the world, the change of its name depending on the language impacted its success. For example, in Spanish, they called it La Semilla del Diablo (The Seed of the Devil) which, in our opinion, is more suggestive than its original title.

However, in the 60s, it seems that spoilers weren’t a problem, so giving a film an explicit name was the norm back then. Still, we must note that, despite the explicit title, the film continues to raise terror in the Hispanic population.

Leaving this issue aside, the film takes us along a path of uncertainty, and it surely doesn’t hesitate to raise doubts in the viewer. It’s common to feel trapped and anxious while watching it, even claustrophobic. However, the rational part of it is always there to hint that maybe it’s not as bad as you think… or is it?

Speaking of uncertainty, already in the nineteenth century, Pedro Antonio de Alarcón, one of Edgar Allan Poe‘s great scholars, said that Poe’s brilliance came precisely from “being rational and aspiring to be fantastic“.

“Cinema should make you forget you’re sitting in a theater.”

This statement is so veridical that, even a couple centuries later, it fit perfectly in Rosemary’s Baby. And it’s precisely that uncertainty, doubt, and psychological terror that make up the foundation of this film.

Polanski makes the viewer doubt reality and fiction all at the same time. Are dreams mere dreams or is there some reality in them? Are they completely real for some people? What happens to Rosemary and her neighbors? The viewers can do nothing but question what they’re seeing on the screen. Let’s all remember that in the mid-twentieth century, religion played a fundamental role in people’s lives. In this sense, the film was a true revelation, even a blasphemous one.

However, in the middle of the twenty-first century, which was the rational and skeptical era, the viewer ends up asking themselves the same thing as several decades ago. Thus, Rosemary’s Baby shows how imperishable a speech can be. Believe it or not, its horror component continues to frighten and baffle whoever watches it.

That doubt between the impossible and the possible, between the real and the unreal, is the actual key to terror and suspense in this film. The psychological aspect of it makes it unique. It has a distinctive way to direct the viewer’s gaze, its peculiar frames make them place themselves at a certain point of view. At some points, it’s even difficult to understand the role time plays in this movie. In short, both the unknown and uncertainty make doubt arise in the human mind.

Polanski didn’t invent satanic cults. He also didn’t invent the scenario. However, he delved into a known starting point. He wanted to develop the couple’s relationship in the opposite way that a romantic film would. He destroys and ridicules them. The public’s role is fundamental is this film since they’re the ones who are going to make sense of a story that, despite how fantastic it looks, is actually plausible.

A good part of the cult and admiration that surrounds the film lies in the strange events that go along with it. As previously mentioned, the film was shot in the Dakota building in New York. This building is quite far from downtown New York. However, over time, it became very popular and many people, including celebrities, visited it very often.

As incredible as it sounds, it seems that people kept warning Polanski about filming there. They said it was some kind of suicide. Tragically, his wife was murdered just one year later in that same building. The soundtrack’s composer, Krzysztof Komeda, died soon after. Even the protagonist of the film, John Cassavetes, died shortly after.

People still doubt if Boris Karloff practiced spiritism while residing in the building. But a few years after filming the film, John Lennon died at the gates of the Dakota building, where he had established.

Endless mysteries surround Polanski’s obsession with perfectionism. He definitely didn’t hesitate to put his actors in extreme situations. As a matter of fact, the film’s protagonist, Mia Farrow, had to eat raw meat despite being vegetarian and had to shoot an impromptu scene across a street. Therefore, the cars running around and braking around her were real and not staged.

Likewise, the young actress received the divorce papers from Frank Sinatra while filming the movie. In addition to this, she had to face hostility from some people on set. Thus, the curse of Rosemary’s Baby doesn’t come due to the issues it deals with; it comes by the mysteries and uncomfortable events enclosing it.

In spite of everything, the characteristic terror of this movie doesn’t lie in its anecdotes but in the film itself. Rarely ever do we face terror that doesn’t understand times. That’s the case with Rosemary’s Baby. When it comes to this film, what matters is what lies beneath the surface.

And that’s the thing – this movie presents something universal. It makes use of different tools and resources in order to portray that claustrophobic, frightening, and hopeless atmosphere.

This film, in fact, is an adaptation of the homonymous novel by Ira Levin. As a matter of fact, the proposal to turn the book into a movie fell into the hands of Hitchcock, who got Jane Fonda to play Rosemary until getting the final result by Polanski.

A shocking, beautiful result that unfolded the entire cinematic imaginary. Furthermore, Ruth Gordon, thanks to her role as Minnie Castevet, won an Oscar.

Despite all these changes, Polanski endorsed the script, managed to appeal to the Freudian in a dream-like story, which called into question reality versus fantasy.

Undoubtedly, this is one of the best horror films of all time; a film that doesn’t ever go obsolete, one that appeals to the subconscious. It keeps the viewer at the edge of their seat as if something exceptional were going to happen at any time.

5 Films That Will Leave You Thinking for Days
Here are 5 movies that will leave you thinking. Next time you're in the mood for an inspiring or motivational film, any of these will make the cut. Read on! Read more »
Link copied!
Interesting Articles
Cinema, Television, and Psychology
Quentin Tarantino and His Taste for Violence