Very few people managed to survive the concentration camps during World War II, but Chaim Ferster is one of those survivors. His common sense helped him cheat death not once, but eight different times. 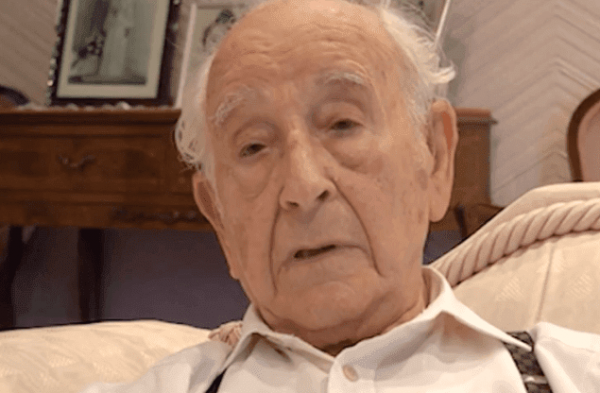 Chaim Ferster isn’t a celebrity or a famous artist. Nevertheless, this 97-year old man, who’s the picture of health and worked until he was 92, is someone that we can all look up to. He managed to defeat the Nazis and escape from their clutches not once, but eight separate times.

In spite of the fact that Chaim Ferster spent most of his youth trying to survive the horrors of war, these experiences didn’t affect him emotionally. That is, perhaps, his greatest triumph. He didn’t survive so he could obsess over the pain and disgrace that he and his family had to endure but to remake his life and live on without the dark shadows of his past.

“We must accept finite disappointment, but never lose infinite hope.”

Today, Chaim Ferster is a sweet, grateful, and wise man. He has told his story hundreds of times because he’s one of the few surviving prisoners of the Nazi concentration camps who can talk first-hand about what happened to him. He’s also a great-grandpa, was happily married for 65 years, and founded a successful business that allowed him to prosper.

Chaim Ferster was born on July 18th, 1922, in the town of Sosnowiec, Poland to an Orthodox Jewish family. At the time, Orthodox Jews made up 21% of the town’s population. He remembers that his entire community watched in fear as the Nazis gained power in Germany.

They were right to be concerned. In 1939, his town was invaded by the Nazis. World War II began and anti-semitism reigned. First of all, it was the yellow star on their clothes, discrimination on the street, and uncertainty about what was to come. Then, the first Jewish ghettos were established. Although Chaim Ferster was only 17 years old, he still remembers the fear of those awful years.

The year 1942 changed Ferster’s life forever. His father died of pneumonia because basic medicine wasn’t available in the ghetto. He and his family suffered from hunger because of all the extremely restricted access to food. That same year, the Gestapo ordered Ferster’s mother and sister to report to the authorities, and he never heard from them again.

Chaim Ferster and the other Jews quickly learned that when the Gestapo arrested someone, they were never heard of or seen again.

People still didn’t know much about the concentration camps. The information that they did have was based on rumors and whispers. It was then that one of Ferster’s uncles gave him some advice that would end up saving his life. He told him to learn how to do something that would be useful to the Germans.

Chaim Ferster decided to learn to be a sewing machine mechanic in the ghetto. It was an excellent decision. In 1943, his time came. The Gestapo summoned him and sent him to a concentration camp.

At first, life was very hard. He was in the Oswiecim, Graditz, and Niederorschel camps. Ferster remembers that the Nazis made the prisoners repair a road when the temperature was 25 degrees below zero.

The Nazis, however, learned about his technical skills and gave him more bearable work. This was undoubtedly the key to his survival. In Graditz, there was a typhus outbreak, and Fester got sick. He recalls a morbid scene: the perfectly organized bodies of the people who had died from the virus.

At the end of 1944, Chaim Ferster was transferred to Auschwitz. He arrived at midnight, and he says that the silence was terrifying. There, they tattooed a code onto his skin and he had some awful experiences. However, two months later, he was transferred again to Niederorschel because they needed technicians there. For Ferster, it was like arriving at a vocational school.

As the Allied Forces advanced on Germany, Niederorschel was forced to close in 1945. All of the prisoners were sent to Buchenwald, an infamous camp where they conducted mass executions every day. By then, since the Nazis knew they were going to lose the war, they wanted to kill as many Jews as possible.

Chaim Ferster was in line to be executed when Allied Forces stormed the camp and freed all the prisoners. He once again cheated death, but the cruel reality quickly set in: more than 30 of his family members had been exterminated. One of his surviving uncles had escaped to Manchester and Ferster went looking for him. There, he was able to have a fresh start in life. In the end, Ferster defeated the Nazis because he lived a long and happy life.

Biography of Viktor Frankl, the Father of Logotherapy
Viktor Frankl: hero, martyr, great thinker. He was all of these things and left behind an important legacy, the school of psychology known as Logotherapy. Read more »