Parents: Your Role in the Fears of Your Children

As parents, not only do you pass on your genes to children, but your children also learn how to react to certain situations from you. So, the way you react to your own fears can end up influencing theirs. 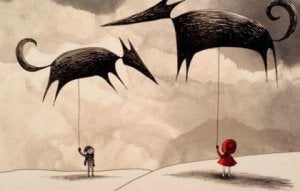 The attitude of parents towards the fears of their children can determine whether they hold onto those fears or not. This means that parents have an important part to play, as role models for emotion management.

Lots of studies, like the one done by Fredrikson, Annas, and Wik (1997), have shown that fears and phobias are more common in some families than others. But why would that be? There are lots of different factors at work.

Both genetics and environment, which give children specific learning patterns, are part of the important role parents play when it comes to the fears of their children. Let’s take a deeper look.

“Many things can wait. Children cannot. Today their bones are being formed, their blood is being made, their senses are being developed. To them we cannot say ‘tomorrow.’ Their name is today.”

What influence do parents have on the fears of their children?

It looks like the best explanation we have for parents’ influence on the fears of their children has to do with the “conditioning theory of fear acquisition” (Rachmann, 1977). Here are the three ways suggested by the theory:

If children see an expression of fear from their parents or other people important to them, they may imitate that basic reaction in similar situations. For example, if a mother always jumps away from dogs in fear, her children will probably do the same thing.

There are studies that show that you can pick up minor, small fears in this way. For ethical reasons, we haven’t been able to study more intense fears and phobias, but there is some evidence from studies with animals that shows it’s also true to some extent.

Learning fear from observation can also end up being reinforced by any negative information conveyed about the object of that fear or phobia.

In the example with the mother afraid of dogs, she may also talk about her fears. That could be anything from why she’s afraid of dogs, to what kinds she’s most afraid of, or something like that.

What that does is give a child a negative set of information, whether through conversations, stories, or games. From there, it can end up determining how the child reacts to a similar situation or thing.

Children also learn how to react from other people. This means that a child could learn improper confrontation strategies, like avoidance. That could happen, for example, if a child sees that their mother’s fear starts to calm down once she gets farther away from its source.

Parents may also either respond to their children’s fears of the dark, dogs, separation, school, etc, with affection, rage, or calmness. Children play a role, too. They learn that their parents give them attention when they’re afraid. This generally leads them to reinforce the behavior and react more intensely, and more often.

Basically, parents and others important to children can reinforce their fears and avoidance tactics because of the associations the children are making.

Plus, according to a study done by Valiente, Sandín, and Chorot (2003), a mother figure plays the biggest role in terms of creating the fear. Also, they play a role in whether or not the child gets over it.

So, as parents, you have an important role when it comes to the fears of your children. It’s vital that you learn to analyze your own fears and react to them better. This is especially true when you’re with your children. That way, you’re helping them grow into better-adjusted adults.

Five Common Misconceptions Parents Have about Raising Children
No two children are ever the same in terms of behavior, attitude, and thoughts. This is why the task of raising children is quite complex. Learn more here! Read more »
Link copied!
Interesting Articles
Family
Regain Control as a Parent by Talking to Your Children