"The Moon": Children Should Choose Their Own Way 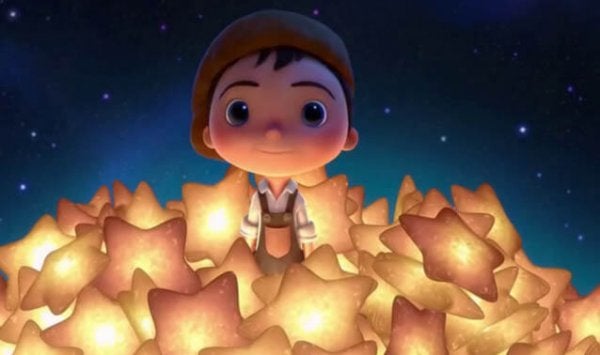 “The Moon” is a delightful short film made by Disney Pixar that will introduce you to the most magical and charming boy around. His eyes glow, filled with that eager curiosity that already has a voice of its own; they shine like those stars that every once in a while fall from the sky.

“The Moon”is a short film about a boy who starts into the business that his father and grandfather share. But he also has a voice, and shows us that each of us has to choose our own path.

If you are a parent or teacher, this film is especially relevant. We mustn’t forget that children have a lot to teach us. Because although we were also children once, our skin, eyes and heart are now covered with so many layers that we’ve lost part of that old spontaneity.

The “bambino” with two moons in his eyes

The film’s three main characters are each fantastic. Each movement, gesture and expression holds a special magic. It’s the story of the initiation of a boy into the job that his father and grandfather perform every day.

It’s normal for every father, every parent to wish to transmit something of themselves onto their children. Nevertheless, our children, on occasion, force us to reflect on what’s behind this desire, and often teach us something in the process.

In this short we’ll see our “bambino” being taken on a boat by his father and grandfather to this completely magically scene. And like any rite of passage one must undergo when one reaches a certain age, the boy also receives his very own sweeper hat, just as his family members wear. He is ready to learn the craft.

But…what happens? Though the task seems simple enough, it leads to complications every once in a while. And thus, we see how the day-to-day of the job, and the force of habit have made the father and grandfather lose their wit and innocence.

That’s precisely when the boy advances with determination and bravery to resolve a situation in a way that the older generations would never have thought of.

The boy acts like “The Little Prince” himself. He applies creative reasoning that only an alert and innocent child is capable of developing.

He stays away from the paternal schemes in order to give way to his wit, showing the new generation that he is capable of choosing his own way. That he’s not rejecting help from his family but showing that he’s just as capable.

While the adults argue, the boy acts. Children have the ability to stay away from formalities, the predictable, and accepted customs in order to break certain schemes and in order to move forward.

The value of kids choosing their own way

This short represents, just as we’ve mentioned above, the value of children choosing their own way, of having a voice and showing us just how much we can learn from them if we allow ourselves to. If we’re capable of opening up to them as well.

Children don’t need to be controlled through every step they take, or even less overprotected. Our children demand our attention, our love and above all that security with which they’ll be able to explore the world while feeling loved. We must help them develop the confidence required to move forward with courage and freedom.

Sooner or later our children will have the right to choose their own way, and it doesn’t necessarily have to be the one we envisioned for them.

And even if it is. Though this boy seems content with the marvelous job his family has, he doesn’t have to carry it out the same way. Because only his intelligence and curiousity will tell him what he should do when those “great big things” fall from the sky…

Enjoy the short film, and don’t forget to listen to Michael Giachinno’s marvelous band. It will take your breath away and fill your eyes with emotion.

Link copied!
Interesting Articles
Cinema, Television, and Psychology
11 Inspiring Movies That Will Make You Want to Be a Better Person

Some inspiring movies are testaments to the wonders of the human spirit. All of them involve surprising responses to extreme circumstances.…