The shadow of teenage messy bedrooms can often extend its boundaries way beyond these spaces. Is it just a matter of laziness or is there something else? How do you deal with it without it leading to drama? 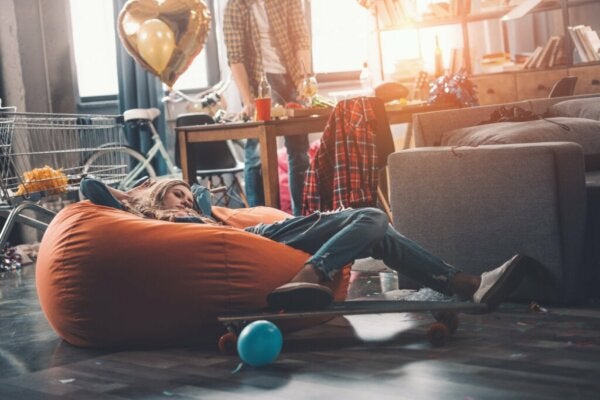 Teenage messy bedrooms are a common source of arguments in many homes. Some parents think they’re the result of their children’s laziness, neglect, and an aversion to cleanliness and hygiene. In fact, their children’s slobbiness may lead them to question their parenting skills and wonder whether they’ve set a good example. Where did they go wrong regarding their education? Is it possible to correct such behavior?

The teen universe is a great box of surprises and uncertainties. It’s kind of like opening a Russian doll, one inside another, wondering what the last one will be like. This is particularly true when it comes to their behavior. Mainly, because it isn’t always possible to prevent or anticipate it.

This very reason confuses parents when their children reach this rather controversial stage in their lives. Thus, while a teenager tries to fit into the adult world, their well-meaning parents try to help them. Unfortunately, they don’t always understand each other.

“My sense is that if you want to change the world, you start from yourself and work outward. Because you build your competence that way. It’s like, I don’t know how you can go out and protest the structure of the entire economic system if you can’t keep your room organized.”

Various sides of a young person’s behavior lead to criticism and wider family discussions during adolescence. The arguments center on them not picking up and cleaning up their room, in particular. They’re about the mess they made everywhere, how they’re getting up too late, and how they need to start doing their part when it comes to household chores.

In fact, waking up late is at the top of the list of conflicts in a teenager’s relationship with their parents. According to the adult perspective, it’s a sign of laziness. Parents criticize this supposed “laziness” without taking into account they’re going against a biological phenomenon; not an attitude as such.

Testosterone and estrogen influence the adolescent’s circadian rhythm and makes them get up late. As you can see, it isn’t a premeditated act of rebellion.

Of course, this doesn’t mean some children aren’t lazy or irresponsible. However, it’s the basis of the hormonal changes during adolescence, so you must keep that in mind.

A messy bedroom is an issue parents actively fight about. In general, a teenager can be in their room for several weeks and even months without picking up any trash or dirty clothes from the floor.

This disorder also extends beyond the limits of their privacy. For instance, teenagers take off their clothes and leave them anywhere and do the same with the dishes they use. They fail to help set a table or clean up after dinner. Then, they refuse to help carry the grocery bags inside. All of this not only expresses the typical “teen rebellion” but also their overall messiness.

Then, in an attempt to put an end to it all, frustrated parents go in and clean up the rooms themselves. Often, they do so in a rather intrusive way and, of course, this is often the beginning of a war.

Beyond questions of hygiene and cleanliness, the management of personal space property is also part of the changes during adolescence. Also of family dynamics, in one way or another.

There was a time in which you could go into your child’s bedroom. Nobody had to pay any kind of toll to be in it and share it with them. In fact, the child wanted you there and tried to bribe you with all of the treasures in it.

However, adolescence began and the rules of the game changed. The youngster began to have a sense of ownership over their space and all objects in it and set limits. For example, it may have been a “Knock before entering” sign on the door and became really angry when someone went in without their permission, even if they couldn’t hear the knock due to their loud music.

At the same time, because cleanliness isn’t all that evident in a teenager’s realm, parental intrusion heightens due to their eagerness to organize any space in their homes. Of course, this is a source of constant friction.

Setting boundaries and limits when it comes to teenage messy bedrooms

All of these changes are actually due to hormonal changes. In young males, the arrival of testosterone, associated with the hormone vasopressin as a hormone of seduction and defense of territory, makes them begin to delimit their own spaces. Of course, their bedroom is the main base.

Vasopressin makes the young man develop behaviors that lead them to fiercely defend their private space. It breaks into the bloodstream and expresses through actions such as not letting anyone into their room. Also, they feel very protective of their family and friends and even of their favorite sports team.

Showers aren’t always a teenager’s best friend. While it’s true that many of them don’t have a problem with showering, others prefer to avoid them. Likewise, some have no strong body odors while others obviously do.

Just as hormones play a part in teen’s circadian rhythms and behaviors, they also influence body odor and the love-hate relationship with the shower (or the entire intimate hygiene ritual).

Body odors exacerbate as a result of the activity of androgens and estrogens. At the same time, the sebaceous glands operate at full capacity. Thus, the face and other body parts, including the hair, become oilier than usual. Also, perspiration turns acidic and leads to a strong odor in various areas of the body, including the feet.

Thus, abruptly, a teen’s body abandons the sweet smell of baby and multiplies its odors and seborrhea, which is why bathing becomes an imperative need whether they want it or not. Children can skip a shower or two but teenagers must shower daily.

One could say that much of the primitivism of smells has to do with this moment of adolescent sexual awakening. The result of this hormonal revolution is the production of smells that separate males from females and identifies them as such. This is typical of animal species that identify possible mates by their body odors.

You must take into account the hormonal influence in your teenager. This doesn’t imply that parents shouldn’t make rules and place limits on their children.

However, they should be tolerant when talking to them about their messy bedrooms. In other words, they must keep in mind these types of behavior are biological and, thus, normal.

In general, young people believe they know it all and think they’re keeping everything under their control. Unfortunately, they often fail even though they’ll never admit it to their parents. Stubbornness and failure to admit and own a mistake is part of teenage rebellion.

Triangulations are the order of the day in the adolescent world in interactive games. As you may already know, triangles are rather conflictive when it comes to human relationships. This is because triangles invite the alliance of two members who can easily coalesce against a third. These two-one lead to fights or at least trying to disqualify and exclude the third member of the triangle.

In short, the most important thing is for young people to get a lot from their teen years. Thus, the adults in their lives must be patient and tolerant in spite of the “Knock before entering” signs on the doors, the mess, the lack of showers, the disagreements… it’s all part of the process. You too were a teenager once.

What Your Mess Means
They say that many of the world's great geniuses were very messy. Einstein's and Mark twain's desks, among others, were authentic pigstys. Read more »
Link copied!
Interesting Articles
Family
Cutting Ties with a Family Member