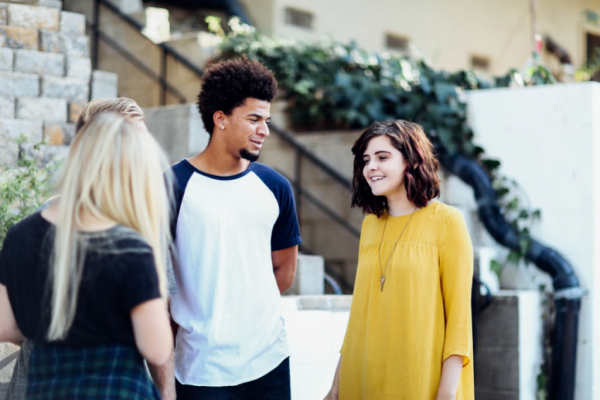 David and Goliath is the story of a teenager who faced a giant while the rest of his people trembled in its presence. This story could be called a metaphor for adolescence. The townspeople represent adults, who are afraid of the giant and flee confrontation. David, on the other hand, represents teenagers who must face the giant, whether they like it or not.

Adolescence is a time of transition and change. If your children manage to get through it, they’ll become adults better prepared to face the world and handle what it throws at them: in essence, to enjoy life. But first they have to face some giants.

“Adolescence is the conjugator of childhood and adulthood.”
-Louise J. Kaplan-

This is one of the biggest giants. Teenagers will experience changes in their height, size, weight, and muscle mass. Their internal organs will also grow, and they’ll develop primary and secondary sexual characteristics.

A lot of changes take place in a very short period of time. Partly because of this, they feel clumsy and insecure. They see their bodies as new and strange, and need time and patience to get used to it.

These days, most pre-adolescents have access to sex education, where they’re taught about sexuality and the changes they’ll go through. However, it’s also important that parents find the time to sit down and talk to them about these issues. You don’t want them to not consider you as a valid source of advice and information.

This giant has to do with the body and hormones. Facing this giant means they’ll figure out their self-image, idealize love, and be disappointed. They will fall in and out of love with an intensity unique to teens.

During adolescence, teenagers go through an identity crisis. They’ll feel the need to define their identity any way they can. A part of this definition will be their self-concept, and values as well. Teens will learn that there are situations in which being faithful to one’s values is not easy.

Teenagers will define three major aspects of their identity:

In this stage of their lives, adolescents start to talk about their problems and questions to others, like their teachers, siblings, and peers. Therefore, it’s important that, as parents, you understand and respect this. Creating an open atmosphere at home will make them feel safe, like you’re not going to interrogate or scold them. They’ll trust that you’ll listen when they feel like talking and help them the best you can.

“You can tell when a child is growing up because he stops asking where he comes from and starts talking about where he is going.”
-Anonymous-

This giant is a hard one. Many parents say they “lost” their children when they see them start to rebel. Teens also usually argue and question things around the house or in the family that went unquestioned for a long time.

Teens still live in the family home, but they begin to take huge steps towards independence. An independence that comes by experimenting and making mistakes, no matter how much you try to avoid it. It’s a transition period where they no longer accept their parents’ commands blindly. They will also look for their place in the world.

If you want to help, then be patient and offer them a safe environment they know they can come home to. You must trust that you raised them right, and respect their autonomy. Give them more responsibility and trust that they’ll know how to handle things.

“Young people have always had the same problem; how to be rebellious and conform at the same time.”
-Quentin Crisp-

Friends are crucial in adolescence. They’re the ones who can empathize, since they’re also questioning the adult world and going through the same changes. With their friends, they can talk openly about anything without being afraid of being ridiculed or feeling out of place. Friendships are intense between teens. In fact, they help lay the foundations of intimacy for adulthood.

Adolescents are easily influenced and tend to go along with trends, whether in  fashion, music, or politics. Having friends is so important to them that sometimes they sacrifice their own opinions and personalities. They prefer to go with the flow and keep their opinions to themselves. Unfortunately, this can cause identity problems.

Dangerous behaviors to look out for

Substance abuse can also spread within groups of teens due to social pressure. Groups have the power to isolate or reject those who don’t want to follow the “rules of the game”. Kids who are shy may have a lot trouble here and become very dependent. Being part of a group makes them “brave” but also means they think less for themselves. It also puts them under a lot of pressure and can dilute their sense of personal responsibility.

As parents, encourage good relationships by teaching your children the skills they need to interact well with others. Let them go to their friends’ houses and have them come over to your house.

It’s also important to know who their friends are and to trust them to choose their friends wisely. Last but not least, be tolerant of friends you don’t entirely like, as long as you don’t pick up on any dangerous behaviors.

“The conflict between the need to belong to a group and the need to be seen as unique and individual is the predominant struggle of adolescence.”
-Jeanne Elium-

Although David had to fight against Goliath alone, your children don’t need to. It’s important for you to trust them, yourself, and the fact that you have the means to help them fight this battle and many more.
The 5 Most Common Problems in Adolescence
The problems in adolescence can range from being temporary mood swings to very serious conditions. Read on and find out how to help teens in need. Read more »
Link copied!
Interesting Articles
Psychology
When Someone Else Appears

Psychology
What Is Codependency?

Codependency is a psychological condition in which one person becomes emotionally attached to another. This is in no way a positive thing. Why can’t you make a decision for yourself? Why…

Psychology
Life Is Too Short To Live Someone Else's Plans

They say life is short, it passes in one breath and when we realize it, we are living more than the…