Hidden Causes of Laziness You Should Know 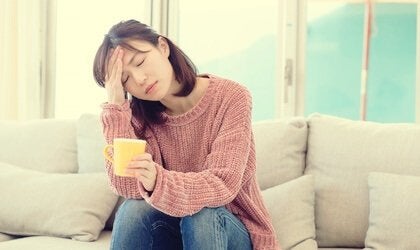 Is laziness a personality trait, or are there other reasons behind it? Many people don’t know that depression, fear, or stress are some of the hidden causes of laziness. It can even be a symptom of the pressure created by our society’s obsession with success and achievement. Laziness is, without a doubt, a behavior with psychological determinants that you should learn about.

A quick google search will show you tons of articles on laziness. Almost all of them will focus on the same thing: how important it is to overcome your laziness.

These articles are full of strategies to fight laziness. They talk about getting rid of it like it’s an old sweater or an itchy scab. What these articles don’t do, however, is invite you to understand the true causes of laziness. They make no attempt to determine what’s going on beneath the surface.

On the other hand, there are experts in the field who invite us to understand laziness better. Nando Pelusi, an evolutionary psychologist and rational-emotive therapist, explains something very interesting about the subject. As a species, we tend to try and conserve energy. In other words, laziness is something we inherited from our ancestors.

When resources were scarce or uncertain, it was important to conserve energy. After all, early humans didn’t know when they might need it. So, perhaps laziness takes over when you perceive some kind of uncertainty in your life. It’s your instinctual way of taking a moment for introspection so you can save energy.

Dr. Pelusi also says that the ability to react, fight, and find solutions to problems in uncharted territory is in our genes. Thus, laziness often has a legitimate reason and purpose. In that sense, understanding it and knowing what’s behind it can make your life easier in so many ways.

“Lord, we know what we are, but know not what we may be.”

Weakness isn’t the only thing that causes laziness. Nor is it idleness, delay, or procrastination. Sometimes we mix up these terms. We know that laziness and procrastination have something in common: low motivation. However, procrastinators do have the intention of eventually completing tasks.

A lazy person, on the other hand, doesn’t always have the strength to achieve their goals. In this kind of example, it’s really important to know what’s going on behind the laziness. Let’s take a look at the most common hidden causes of laziness.

Laziness is like a soft and comfortable bed where you can escape from reality. Sometimes you turn to laziness when you feel particularly fearful in your day-to-day life. You might be afraid of not fulfilling your goals, failing, or not being what others want you to be. On the other hand, you might feel anxious about having to face things that are out of your control.

All that fear becomes overwhelming. So you decide to leave it all for tomorrow. Or, better yet, for when you’re more motivated. But that tomorrow never comes because your fear takes over.

Laziness as a symptom of depression

Depression is not always easy to detect. In most cases, depression hides behind exhaustion and apathy. The black hole of depression swallows up anything positive.

Studies like this one in the Clinical Neuroscience magazine reveal exactly that. Researchers at Harvard Medical School found that laziness is a reoccurring symptom in most depressed patients. That’s why it’s so important to pay attention to people who are acting lazy and unmotivated. This is especially true if they show signs of other psychological issues like desperation, negativity, and fatalistic thoughts.

One of the hidden causes of laziness can be certain medical conditions. If you’re often tired, overwhelmed, exhausted, and unmotivated, you should get some diagnostic testing. You could have some kind of thyroid disorder. Thyroid problems can cause diabetes, anemia, sleep apnea, heart disease, or even fibromyalgia.

One hidden cause of laziness is a lack of real purpose

Purpose is essential to give your life meaning. If you don’t have any goals, you won’t be motivated to do anything. Maybe you’ve been let down by some experiences or things are just too complex or difficult. You find it difficult to dream and to plan. You turn to laziness because it’s a safe and quiet refuge. There, you can simply be at peace.

We’ve all been in that space at one time or another. What’s more, teenagers often feel like this. It manifests itself as isolation, the classic “lazy” teen holed up in their room all day. This is pretty common and it will end the moment you find purpose.

The Institute of Epidemiology and Health Care at University College London published a study in The Lancet magazine on this subject. They found that well-being and happiness are intrinsically linked to having purpose and meaning in your life.

So, if you feel like your life lacks purpose and that is making you lazy, it’s time to find something that motivates you. Figure out what gives you hope.

In conclusion, maybe now is a good time to end the stigma of laziness. There will always be people who are simply lazy and inactive by choice. However, it’s important to recognize that laziness is often accompanied by uncomfortable apathy and distress.

So, it’s important to learn what’s going on beneath the surface to discover the hidden causes of laziness. Dig a little deeper, take a closer look, and try to understand. Don’t put it off until tomorrow. After all, if there’s one thing we know about laziness, it’s that the longer you wait to confront it, the worse it gets.

Apathy: When You Have No Motivation and You’re Exhausted
People say that apathy is like a curse. They say once it catches you, it won’t let you go. I'll mess up your life, extinguish any fire you have inside, and put out your feelings completely. Read more »
Link copied!
Interesting Articles
Psychology
How to Motivate Students

Psychology
The Psychology of Connection: The Art of Connecting with People from the Heart

The psychology of connection tells us that getting along with people isn't the same as "connecting" with them.  In fact,…