The death rituals of gorillas, studied by researcher Amy Porter, show that this species has a plethora of emotions similar to that of human beings. They mourn the dead and show homage and respect to them. 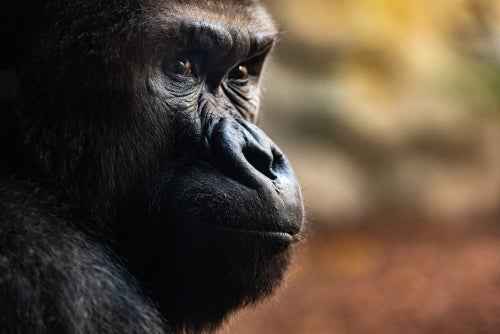 A group of researchers startled the world by publishing three videos of spontaneous death rituals by gorillas. From what the videos show, it seems like these primates have an idea of what death is, and they mourn and feel sad when they lose one of their own. In fact, they develop several behaviors that resemble human death rituals.

Let’s not forget that Western culture has always been anthropocentric and Eurocentric. Human beings have a hard time understanding that our species belongs to the animal world. Furthermore, people believed that indigenous or black people didn’t “have a soul”, as if they weren’t humans. And when it came to animals, humans thought they were completely different. That’s why finding out that gorillas have death rituals is so important in today’s society.

Gorillas’ attitude toward death is clearly the same as humans’. They’re incredibly intelligent and have emotions just like us.

“The animals of the world exist for their own reasons. They weren’t made for humans.”

One of the stories that were part of the study by Amy Porter talks about a gorilla that researchers had named Titus. It was an old specimen and the alpha male of its troop.

It all happened at Rwanda’s Volcanoes National Park when a young gorilla with the characteristics of an alpha male joined the troop. This youngster started fighting Titus for leadership. In order to get rid of its rival, Titus forced its troop to walk long distances in order to leave the young gorilla behind. And it worked.

Three weeks later, however, Titus was so tired, that he rested for three days. Then, he died. Its best friend stood by his side day and night. All members of the troop went one by one to stand before Titus’ corpse for a few minutes. It was their way of worshipping their dead leader.

This entire scene shows one of the death rituals of gorillas. But something even more curious is that thanks to a DNA test, researchers discovered that Titus’ rival was its own son; a story worthy of Freud’s study.

Tusk was the only female adult in Titus’ troop. When the young male gorilla arrived, it had a sexually aggressive behavior toward Tusk. However, the female gorilla and its children violently rejected the new member’s attempts to mate.

A year after Titus’ death, Tusk became ill. In the span of 20 days, she got worse and worse until she died. Tusk had two males and they were by her side in her last days. Also, her sons visited her with two female gorillas.

In this case, some of the behaviors were odd. The younger offspring approached its mother’s body and tried to suckle it, although he hadn’t done it in years. Experts call this a “comfort nurse”.

The older child started to make defying gestures and even kicked the corpse. The new troop leader was also present and fiercely punched Tusk’s chest. Scientists explained that these weren’t aggressive behaviors, but an expression of their frustration and rejection toward Tusk’s death.

Another gorilla death ritual happened during the study of a troop in Congo. In this case, it wasn’t a member of the troop who died. Instead, they found a stranger gorilla’s body during a walk.

The troop sat in silence around the corpse and observed it for a few minutes. They smelled it, licked it, and groomed it. In their actions, they showed signs of respect, such as their silence and grieving demeanor.

In this case, there was also some defying behavior, but only by the alpha male. It was as if he rejected the negative feelings of its troop. Finally, after all the gorillas finished smelling and licking the corpse, the alpha male threw the body into the bushes.

Curiosities
The Psychology of Phishing: When Emails Are Dangerous