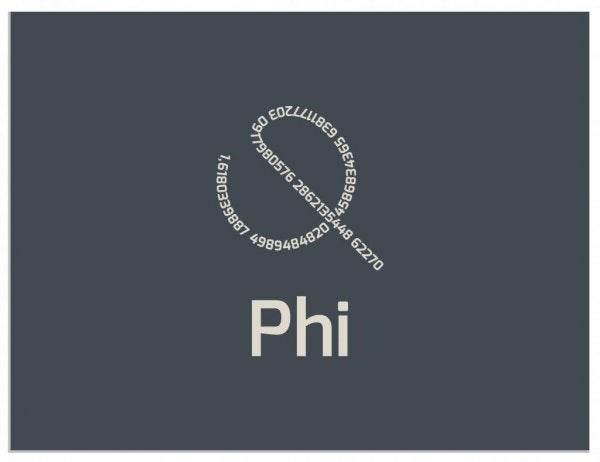 I’m going to try to discuss this topic with the vocabulary and reasoning I now possess, knowing full well that it is not ornate enough to cover its complexities. I will move forward with careful short steps, as if I was blindfolded, because I truly am. It is said that Euclid, in the year 250 BC, defined the number phi. Although it had another name at the time, or maybe none at all. This is “the golden ratio” or “divine proportion.” To represent it, now in the twentieth century, the twenty first letter in the Greek alphabet is used. They say that it was baptized as such in honor Phidias, a Greek sculptor whose works of art emanated such beauty and proportionality that they fit the sublime proportion we now discuss. But let’s take an even closer look.

This “phi” number is an algebraic irrational number (an infinite non-periodic decimal) with many very interesting properties. It’s not a unit that is later applied as an index of something. Instead it is a ratio or proportion that appears in a surprising frequency. This ratio can be found in some geometric figures as well as in nature. This is why this number intrigues and dazzles laymen. In nature, the number phi is linked to the male to female ratio of bees within a beehive, the ratio of the ribs in each of the leaves in a tree, the arrangement of the petals on flowers, the number of seeds in a sunflower, the distance between the spirals of a pineapple, the distribution of the branches and leaves in a trunk in order to receive the most sunlight, the inner spiral of snails and some cephalopods.

The most beautiful human beings possess a greater amount of these proportions. The number phi can be found in the proportions of Nefertiti’s bust. It was Leonardo de Pisa, who was referred to as Fibonacci, an Italian arithmetician from the year 1200, who had an intimate relationship with the Arabic culture of Argelia, and, while presenting a study on the birth of rabbits, offered a sequence who upon further studies helped discover the relationship this had with the “golden section.”

But it is in art where the number phi acquires a special nuance, something like an intensely mystical substrate. Phidias was commissioned by Pericles to build a temple in honor of the Goddess Athena on the Acropolis of Athens. The Parthenon has always been an example of balance, perfection and beauty. Well, Phidias used his inherent knowledge of the “golden ratio” in its construction, both to determine the dimensions of the whole building as well as to place its sculptural details.

Since then it has been a paradigm. In 1525, three years before his death, the great Renaissance painter Durer, passionate lover of mathematics, gave the world a precious work of art. We’re referring to the book “Durer’s Spiral,” based on the “divine proportion.” His magnificent graphic work of art “Melancholia” also holds multiple keys and mathematical metaphors. Studying its particularities is a surprising confirmation of it. Its unusual properties are the main reason why the “golden ratio” has been accepted over the years as divine in its compositions and infinite in its meanings. The Egyptians used it in the burial chamber in the pyramid of Cheops.

Ancient Greeks believed that the comprehension of this proportion could help people become closer to the Creator. God could be found within the “divine number.” The proportion was like the veiled formula God used to create harmony, perfection and beauty. The obsession to capture the ideal proportions has been a constant preoccupation in artists, from ancient times up to present day. The use of geometry to fit the composition in a balanced way was a method generally used during the Renaissance. And since the divine ratio is based on the exact sequences present in nature, it inspires this search in an admirable way.

An excellent example of it is “The Portrait of Giovanni Tornabuoni,” which reproduces with mathematical precision the developments of the sections used at the time. The guidelines arrange with absolute geometric precision the rest of the elements which complete the composition. Ghirlandaio, the author, divides the spaces in his painting through these forms. Thus, the relationship between harmony and mathematical proportion. Two diagonal lines, crossed in an X, center the image and precisely frame the position of the bust. Other lines situate the cell in the background. From these emerge the three sides to an equilateral triangle in which the author situates the movement of the head. And from this the inclination of the nose can be traced in relation to the eye. The mathematics in it are perfection, exactitude, harmony, balance, poetry. Surprising, right?

“The Golden Ratio.” Euclid, Plato, Pericles, Vitruvio, Raphael, Michelangelo, Botticelli, Lucca Pacioli, Leonardo, Johannes Vermeer, Mozart, Corbusier, Velasquez, Debussy, Dali, and an infinite number of creators and artists have used it. Rafael Alberti wrote a poem for it. It was used in medieval cathedrals and the spiral staircase of the Vatican. But it has also been used in such vulgar of places like the most appropriate sizes used for photography, television screens, postcards, credit cards. It can even be found in the structure of our cosmos and in the dynamics of dreaded “black holes.”