Living without Desire - When Apathy Grabs You

Living without desire manifests as sadness, apathy, and reluctance. Yet, many people carry on without intervening, without communicating, and without asking for help. But why do they hide how they feel? What can you do if you're the one who's in this situation? 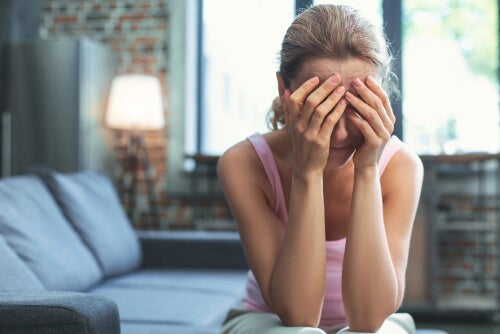 Living without desire is a global reflection of apathy. The lack of motivation about what happens in the present or what will happen in the future. Getting up every day in this state is often an ordeal. A slope that becomes too steep to climb due to the heaviness that governs an apathetic person’s state of mind.
Keep in mind that it’s very hard for depressed people to get up every morning. This is because they must spend time on certain tasks while lacking the strength to perform them. In a way, they do need to make an extra effort due to the extra weight they carry. All to achieve simple goals such as having breakfast, dressing, and showering. Thus, apathy is so dreary it becomes too hard to take any initiative.

Living without desire in silence

There are times when apathy goes unnoticed. This is because the affected person overcompensates for their lack of motivation. But they replace it with effort. Thus, people who are close to a person who lives in a spiral of reluctance may not realize the pain they’re in. Thus, think for a minute, how can you perceive that they’re apathetic when they seem to be fine?
This is a very relevant point because there are times when you might not give any importance to the emotional state of others. Particularly when those people don’t seem to be in distress. And especially when they continue to fulfill their duties at work, at home, and with their community. They may even smile and joke around! The thing is they’re living without desire but keeping it to themselves.

In the face of apathy, avoid the topic entirely

When someone tells you how they feel, you may give them some heartfelt advice. You might try to console them by saying things such as: “It’s OK”, “This too shall pass”, “Everyone has problems“, “Cheer up”, or “Don’t give it so much importance“. Yes, you may do so with the intention to help. But this kind of advice is meaningless to a person who lives without desire. It’s not comforting at all and quite the contrary, in fact. A depressed person might cut communication channels with you if they believe you don’t understand them. In fact, they’ll withdraw even more.
So what do you do if someone tells you they’re living without desire? Well, that person may be in need of your support and active listening. They need to feel that you’re trying to understand them and that they can count on you. They’ll take comfort in expressing what it means for them to live without desire, to explain how hard it is for them to go on.

According to research, there might be a physiological component to living without desire, in a state of apathy. Scientists associate these with specific brain circuits. The same that show certain abnormalities in their functioning at certain times. Thus, they think there may be other external factors behind someone’s apathy.
For instance, there might be an underlying psychological condition, depression or dysthymia, behind apathy. Thus, one of the first steps to overcome it is to rule out medical problems or psychological problems.
In this case, it’s crucial to seek support. Be it within a person’s closest environment or through a professional. This is because the pain is unbearable at times and a person can’t deal with it on their own. As you can see, they need external help.
Overcoming Apathy and Boredom Takes More Than Just Willpower
Overcoming apathy and boredom takes more than just willpower, because there are often much bigger things hiding behind them. Read more »
Link copied!
Interesting Articles
Culture
25 Wonderful Gifts from Our Dogs

When you talk about your dog as if it were a baby, when you cry because something is wrong with your…

We can define social roles as the roles we play in society. Social roles detail and represent what activities or…

Sexual anorexia is also known as anaphrodisia and inhibited sexual desire. It's a disorder that causes low interest in sex.…