Experts say that Frida Kahlo painted more than 150 paintings. At least 55 of them are autobiographical. In fact, she depicted her whole life in those enigmatic paintings that continue to fascinate audiences today. Her art is both honest and profound, as she was herself. 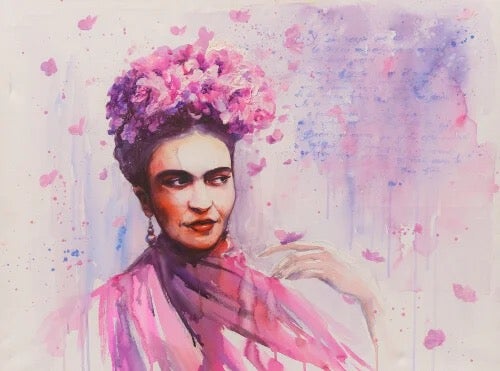 Currently, a painting by Frida Kahlo holds the record for being the most expensive one sold by a Latin American artist. It’s the painting Roots for which someone paid more than $5 million dollars in 2006. Kahlo was also the first Mexican artist to sell a painting to the Louvre museum.

André Bretón, the father of surrealism, was one of Frida’s great admirers. He claimed her art was surreal. However, Frida herself disliked that classification. She said she painted her life, not her dreams. For this reason, she claimed her work wasn’t surreal. Nevertheless, when Bretón visited her in Mexico, she admitted she’d been wrong. In fact, it wasn’t just Frida that was a surrealist, but the whole of Mexico had become a center for surrealistic art.

Frida Kahlo was the daughter of two photographers. Her father was German and her mother Mexican. She was born in Mexico City on July 6, 1907. Nevertheless, she later liked to believe she was born in 1910, the year of the Mexican Revolution. When she was only six, she contracted polio. This left her with life-long physical effects.

To help her rehabilitate, her father encouraged her to take up sports like football and boxing. She managed to partially recover. However, her illness led her to be a lonely child who spent many days of convalescence shut away in her room.

Frida had a very close bond with her father. He used to suffer fainting spells but didn’t know why. Later, he learned he was suffering from epilepsy due to an old brain injury. Frida learned how to help him when he had an attack. At the same time, her father was a great companion to her and offered her a great deal of support when she was going through particularly critical times healthwise.

At school, Frida was called “Lame Frida” because she had one leg that was thinner and weaker than the other. In fact, she actually signed some of her paintings with that name. She later went on to study medicine, where she had an affair with a classmate named Alejandro Gomez Arias.

The story of her accident tells how she and Arias both left college together. However, she forgot her umbrella and they both went back to get it. They then took a bus which had a serious crash with a tram. Frida was badly hurt. Her spine and pelvis broke into three parts. She also suffered eleven fractures in her right leg, two in her ribs, one in her collarbone, and a dislocation of her shoulder and hip. Furthermore, a handrail pierced her body through her pelvis. Historians say that a man on the bus had been carrying gold flakes and Frida’s body was covered in a cloud of fine gold dust.

The accident changed her life forever. In fact, she started painting when she was first confined to bed and never stopped. She was introduced to Diego Rivera by a mutual friend. Love blossomed almost immediately. He was 43 and she was 22. Frida’s father warned him that she was a devil in disguise. Her mother said the wedding looked like a marriage of an elephant to a dove.

The two artists had a passionate relationship marked by mutual infidelities and Frida’s physical suffering. She’d always wanted to be a mother but endured several miscarriages and abortions. In fact, the accident prevented her from ever getting pregnant. At the same time, Rivera was unfaithful to her many times, as was she. As a matter of fact, they say that when she found out who her husband’s lovers were, she convinced them to be her lovers, too.

In the meantime, her work was becoming increasingly interesting. She exhibited at various art centers in the United States and Europe. However, she went through a very painful period when Rivera had an affair with her sister, who’d always been her great confidante. This caused the two to divorce. Nevertheless, they later remarried.

Frida’s health situation became more complicated and she had to have her leg amputated below the knee. She spent a year in hospital. In fact, she attended her first solo exhibition in Mexico on a stretcher.

Frida Kahlo died on July 13, 1954. She was 47 years old. Two years later, Rivera died. He asked to be buried alongside her. However, he never got his wish.