Some people who have lost a limb continue to feel that it's still there. This is a phenomenon known as phantom limb syndrome. Read on to find out more! 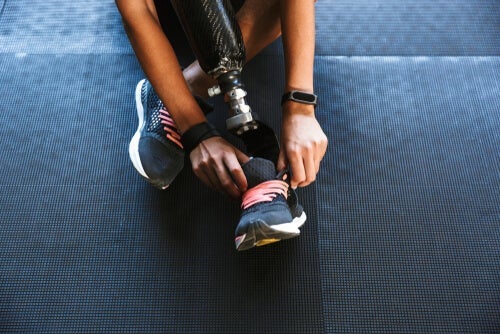 Phantom limb syndrome is a phenomenon characterized by a sensation in the area of a limb that has already been amputated or lost. These sensations can make you feel that the missing body part is still there and working as before. This is because the brain is still attempting to work on it. Sufferers may also experience pain, burning, itching, cramping, and even paralysis of the surrounding area.

This syndrome is experienced by approximately 60% of people who have lost some part of their body. The extremities are the parts of the body that mostly lead to this phenomenon. However, people can also feel it when they lose an eye, a tooth, or a breast. Most of the affected patients have severe pain, and missing this part of their body becomes practically unbearable at times.

The term “phantom limb syndrome” was coined by Doctor Silas Weir Mitchell in 1871. When he was treating soldiers injured in the American Civil War, he realized that most of the amputees still felt the presence of limbs that they no longer had.

Below, we’re going to look at the symptoms and possible causes of phantom limb syndrome, as well as its treatment.

What does a person with phantom limb syndrome feel?

The sensations that people who suffer from phantom limb syndrome feel are very varied. Many of the sensations depend on the individual situation and how they lost the body part. However, we can say that the most common sensations are:

Pain is the most common sensation for people who suffer from phantom limb syndrome. It’s chronic pain and goes by the name of phantom limb pain. This pain can be shooting, persistent, and burning.

Phantom limb pain may get worse when the patient is stressed or very tired. It can also intensify by exerting pressure on the stump or part of the remaining arm or leg. A common cause is the use of a poor quality artificial limb or one that doesn’t fit properly.

Causes of the syndrome

Although the exact cause of phantom limb syndrome is unknown, experts have put forward several hypotheses. For a long time, experts believed it was due to a combination of biological and psychological factors. They believed it was a type of mental illusion, a consequence of post-traumatic stress after losing a body part. Now, however, there are new theories that attribute the origin of the problem to activity in different parts of the brain.

Currently, experts believe that the origin of this syndrome is a result of a “cerebral reorganization” that the brain carries out after losing a body part. In other words, the brain has to rearrange the nerve wires to adjust to the new changes.

The time it takes for the brain to carry out this process and accept the fact that a body part is now missing depends on several factors. Two of these factors are the level of nerve damage in the linking of the limb to the brain and also the physical memory of pain experienced prior to the amputation in the case of infection or clots.

Most cases of phantom limb syndrome, especially those that manifest with pain, usually disappear with some sort of treatment. However, in the few cases of persistent chronic pain in the phantom limb area, finding suitable treatments can be challenging.

For decades, scientists have developed many types of treatments for this syndrome and its associated chronic pain. They’ve used everything from painkillers and antidepressants to nerve and brain stimulation.

Unfortunately, these treatments aren’t always effective; they dull the pain, but don’t make it disappear or may just relieve the pain for a time.

In the 1990s, mirror visual feedback therapy was born. It has had promising results. It was created by neurologist V.S. Ramachandran and consists of the use of mirrors to create the illusion that the lost body part is still there.

It generates visual feedback that allows the patient to “comply” with the motor signals sent by the brain. Doing specific exercises in front of the mirror can lower the pain immediately and even make it disappear completely after a few sessions.

In the last decade, some technological advances have also helped treat phantom limb syndrome. For example, virtual reality and augmented reality have yielded promising results in pain reduction. The only drawback is that, although the price has gone down over the years, it’s still an expensive technology.

However, as shown by a study conducted by Colombian neurologists, the effectiveness of any of these treatments hasn’t been fully proven. In fact, they say that only 10% of patients with phantom limb pain have experienced long-term improvements.

Thus, there’s still a long way to go to help people who suffer from this traumatic condition.