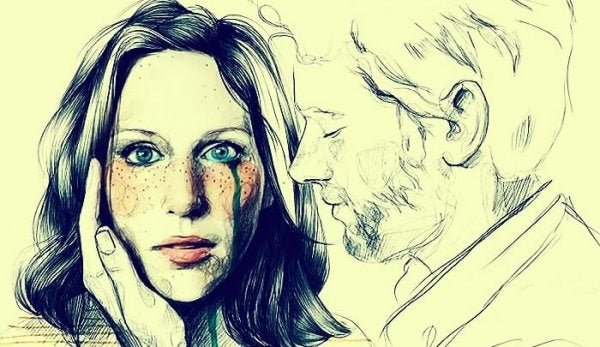 Some people go through life watching their words and actions so that they don’t bother hypersensitive people. But when phrases like “I’m sorry” and “don’t get mad” become frequent notes in the score of your life, the only thing you’ll achieve is slow self-destruction.

In some way, we’re all like tops spinning around in a crowded room. Sometimes we knock against each other, and that’s normal. But in the nervous dance of relationships, we sometimes encounter people with extremely thin skin. They’re so sensitive that all they do is react to one offense after another.

“Anybody can become angry – that is easy, but to be angry with the right person and to the right degree and at the right time and for the right purpose, and in the right way – that is not within everybody’s power and is not easy.”

We’re talking, of course, about hypersensitive people. They’re experts in suffering and in spreading that suffering. They tend to present victimization, insecurity, and a lack of self-esteem. They are slaves to other people’s opinions, and they constantly push guilt on others.

You have to be careful when establishing an emotional relationship with this kind of person, because you’re going to be spending your life watching every little detail, choosing the right words, gestures, and actions so that they never feel offended or concerned.

That is, of course, until you gradually crush your own self-esteem by constantly saying “sorry, it’s my fault.” Avoid dynamics like these.

When their anger makes you feel guilty

“Don’t get mad, it won’t happen again.” “Calm down, really, don’t get angry, that was my bad.” When you constantly have to say phrases like these, you’re probably completely lost in an intricate psychological maze. You must apologize in order to mitigate the offense, which is almost always unjustified. You might even think that it’s better to take the blame if that soothes their anger.

However, living with all that weight on your shoulders will end up stripping your emotional integrity day after day. This is known as “defensive guilt,” a mechanism that victims of emotional blackmail tend to use to protect themselves against powerlessness.

This is certainly a quite complex subject. Keep in mind that hypersensitive people are very vulnerable. Despite the fact that their low self-esteem leads them to make interpretations through the lens of victimization, don’t forget that sometimes, they can become very aggressive.

Relationships with people like this end up becoming almost like a ritual. Everything will go well as long as you give in, lower your head, and honor them through your actions and your words. This way, you’ll prevent the demon of sensitivity from rearing its head.

When you’re stuck in this cycle, if you don’t react to it, you’ll be like a fragile moth flying around a flame. You’ll keep doing it until it slowly starts to burn your wings.

How to live with a hypersensitive person

You don’t have to run away or break up with them without fighting for them first. You’ll regret it if you try to distance yourself from them before you put up a fight. It’s always better to do everything you can before making a more radical decision. If you love them, fight for them. If the fight turns out to be futile, there’s no other option than to distance yourself in order to save your personal and emotional integrity.

It’s worth noting that in the 90s, a series of studies on hypersensitivity found that it isn’t a disorder, it’s a personality feature. To understand it better, you have to be able to distinguish between the different types of sensitivity that exist.

The first type of sensitivity is oriented towards other people’s feelings. The person is able to feel other people’s emotions and empathize with them. The other type, which is hypersensitivity, is directed towards oneself as a reaction to others. It always occurs in the form of self-defense.

Strategies to deal with hypersensitive people

Never adapt like a glove to the person’s manias, obsessions, or concerns. If you obsess over avoiding making them angry, to the point where you control every little detail to prevent them from exploding, you will lose everything.

Make them understand that if they’re always offended by something, they will only make themselves unhappy and push others away.

Think before you make a judgment or give them your opinion. Think about how you’re tired of being their dartboard, of taking the blame, of being the scarecrow that protects them and keeps them calm.

You have to be able to reinforce their self-esteem, but also make them value yours. Their skin is very thin, but yours already has too many scars.

Above all, ask for recognition and respect. Because you’ll ultimately get tired of walking through the minefield where one wrong step could make them explode with anger and resentment. Nobody can spend every day in a constant state of alert and endless stress. Life is too short to live in fear.

The Experiment is a German movie about human nature from 2001. It was directed by Oliver Hirschbiegel. It is based on the play The Black Box. This play was inspired…