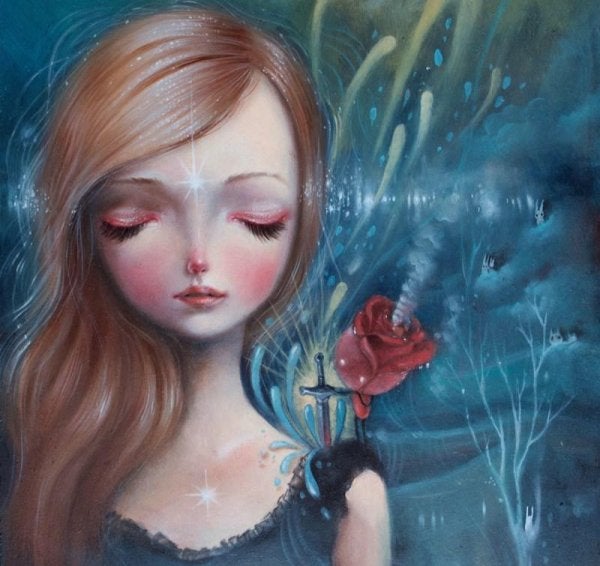 For many, falling in love is like a being on a carousel of nervous emotions that are hard to make sense of. An intense chaos of happiness, sprinkled with what is sometimes the most unbearable of sorrows.

This is a reality that can be even more overwhelming for the so-called “highly sensitive person” or HSP.

It’s important to remember that about 20% of the population is highly sensitive. They have  a series of psychological and emotional particularities that sets them apart from the rest.

Characteristics of the highly sensitive person

The world-view about highly sensitive people comes straight from the heart, and though many characterize it as a “gift”, on occasion this aura doesn’t provide true happiness.

They are intuitive, creative and capable of perceiving other people’s emotions in all of their nuances, but this also causes them to be more reactive. They feel more affected and pained when faced with certain situations.

The highly sensitive person enjoys quite a bit of solitude, and prefers to undertake activities alone, where they can appreciate the world in it’s authentic reality.

They have their own rhythm, and are on their own time, which is very different from the accelerated materialism of the rest, in which they don’t always feel integrated.

They’re observant, intuitive, detailed, self-demanding and have a lower pain threshold. They’re bothered by loud noises, and it’s even common to find small children who are pained by certain types of clothing, frictions, and even voices.

As we can see, highly sensitive people have a more refined vision of reality, but at the same time, this gift – this character trait – makes them much more vulnerable. Especially when it comes to love…

Relationships between a HSP and a non-HSP

Obviously there are many different types of individuals, like the highly sensitive person who decides that it’s better to be alone due to all the incompatibilities and the suffering that they provoke.

There are cases in which this accumulation of sensations and emotions generates a high level of stress and anxiety within, resulting in physical pain, as well. A pain so unbearable that it’s made them believe that it’s better “to not fall in love.”

But it’s also safe to say that highly sensitive people fall in love easily. Their virtue of appreciating people in all their nuances, causes them to feel attracted almost immediately, and full of a comforting energy caused by physical and emotional attraction.

However, they run several risks that must be considered:

If you are a highly sensitive person, it’s possible that you’re gradually realizing that your partner doesn’t appreciate the same things you do. They don’t reach the same emotional and intellectual depth as you.

On occasion, this will make you feel frustrated and will make you demand certain things from your partner that they simply can’t offer, can’t see or understand. The personalities are usually so different that it’s normal for disappointments and misunderstandings to occur.

If you’re a highly sensitive person, you need to take into account that other people may not be able to satisfy your every nuance or be on the same level as you. All of these things end up causing great suffering.

The highly sensitive person and their grand affection

The highly sensitive person often has trouble monitoring their own personal limits, and has the tendency to offer everything they have to the other person, forgetting about themselves in the process.

This is a very big risk. Obviously it’s wonderful to achieve a symbiotic union in which we offer all of our affection, our emotions, time and experiences to our beloved. For a highly sensitive person, there’s nothing more comforting.

But we must protect ourselves by guarding our limits. If we give everything to the other person we lose our identity, and become even more vulnerable to any disappointment, any snub or any argument.

Frustration and disappointment can gradually start to come around. To a highly sensitive person who is subsequently very self-demanding, these dimensions can end up being very destructive.

Any failure or disappointment is experienced in a very traumatic form on every level, both physical and mental, running the risk of falling into a depression.

Being a highly sensitive person can be a virtue

It’s important to keep this in mind. Being a highly sensitive person can be a virtue – a gift. But it doesn’t change the fact that this personality trait requires a certain amount of self-knowledge, of knowing how we are and what causes us pain. By doing this, we can establish limits within which we are protected.

Keep a good level of self-esteem while enjoying who you are and how you are. It’s possible that said sensitivity is occasionally a synonym of suffering, but it’s not always that way.

As you come to know yourself better, you will see yourself as more than capable of surviving this reality, which on occasion doesn’t shine with all the sensitivity that it should.

Stress and hyperthyroidism share a very significant relationship. We don't often realize the impact chronic stress can have on our health.…

How many times has erroneous thought led us to undesirable situations? Thought can exercise a powerful force on us. It…

Psychology
How to Handle a Toxic Mother-in-Law