Avoiding Jealousy in Children When You Welcome a Baby

Welcoming a baby home and introducing them to their siblings is a wonderful moment. However, this big change in family life can cause jealousy in some children. 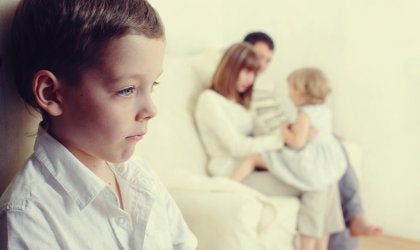 Many children are jealous of their new brother or sister. The birth of a new baby forces them to share both space and their parents’ attention with someone who’s a stranger to them, does very little, and demands a lot of time. This time that, before, they enjoyed all to themselves. If parents don’t manage the situation effectively, it can lead to intense jealousy in children. It can cause unwanted behaviors and even behaviors that you thought your child had grown out of.

One of the demons that cause jealousy in children is fear. This fear increases when the new baby arrives home and needs attention almost 24 hours a day. The child can feel that they don’t receive the same loving care (or at least not to the same extent as before). They can feel ignored. As a result, they can become jealous and the new baby can become their new rival. However, this situation can be dealt with in a way that doesn’t have serious consequences. Let’s take a look at how you can achieve this!

Make a plan for introducing your children

To make sure your child doesn’t become jealous when their brother or sister arrives, they need to understand why the new family member requires so much attention. To achieve this, it’s important for parents to show their child pictures of when they were a baby and to explain the care they needed. That way, when the new baby arrives, the child will better understand what’s happening.

If a child doesn’t understand how parents care for babies, why they need to be so attentive, and why the child needs to share their attention, they can reject the baby. To avoid this, it’s extremely important for parents to talk about the situation in a way the child can easily understand and manage their time well. This way, the “dethroned” prince or princess won’t lose all of their personal space.

Similarly, the child’s parents can give them a gift on behalf of the baby who’s soon to arrive. It could be a doll, a pair of bootees, or something similar. That way, the child will be curious about the baby who’s about to arrive. They might even react in a similar way, preparing something with an emotional significance to share with their brother or sister when they arrive.

Some children become very irritable when they’re jealous, whereas others show signs of sadness.

What to do when the baby arrives

To avoid jealousy in children, making a plan for introducing them to their new sibling is very important. This will be the starting point, the first impression, and the moment your older child will choose how to treat their brother or sister, both at that moment and in the future. If parents organize this meeting well, they may avoid many future issues.

However well you plan this meeting, it’s still possible that your child will be reticent to get to know their sibling or to accept them as part of the family. It’s possible that your child could just be shy or it could be that they’re rejecting their brother or sister. Identifying why your child is reacting like this will help you resolve the issue. It’s important for your child to be able to express their emotions. In addition, you must help them handle their feelings.

Involving your children to avoid jealousy

In many cases, parents don’t let their children hold their new baby, despite them asking to do so. This is a serious mistake. One of the ways to ensure a child doesn’t feel jealous is to involve them in the care of the new baby. There’s no doubt that letting a child hold a new baby can be dangerous. However, there’s no reason a child can’t do it if they’re sitting down and their parents keep a close eye on them at all times.

In addition, if the child wants to get involved in activities, it’s a good idea to let them become further involved in caring for the baby. If they want to or if you manage to encourage them, they can help with bathing the baby (under no circumstance should you force or emotionally blackmail them to do this). Whether it’s fetching a towel, shampooing the baby, or letting them gently clean the baby’s head, this type of contact is vital.

The more moments you share with all your children at the same time, the more they’ll bond and the less you’ll need to split your time. However, it’s important to avoid going to the other extreme. In other words, under no circumstances should the older child become responsible for caring for their younger sibling.

If a child isn’t able to get close to their sibling, if they’re given the excuse that they have dirty hands or that they could hurt the baby, for example, this will do nothing but provoke jealousy and rejection in the child.

All children have needs

Despite the efforts you make to avoid a child becoming jealous of a new brother or sister, this shouldn’t ever be a substitute for the quality time children need. Although new babies have many needs, older children also have their own needs and really benefit from some time all to themselves. It’s important to consider that a bond between a child and their parents is one-of-a-kind and non-transferable.

This is why it’s essential for parents to maintain the child’s routine, especially those aspects of the routine that improve their welfare. This will help the child feel close to their parents and understand that they’re still very important to them.

In a nutshell, there are several things parents can do to avoid their child or children becoming jealous when a new baby arrives. As the baby grows, there will be new challenges and the children may become jealous of one another. Regardless, these challenges are an important part of the wonderful adventure of being parents.