Sibling Rivalry: When the Oldest is Dethroned 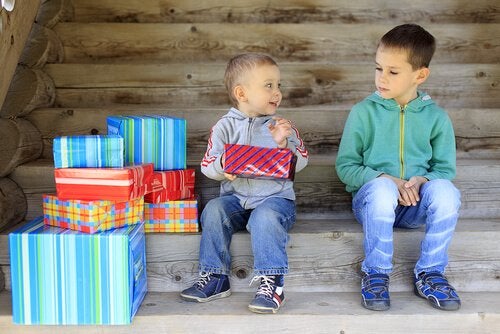 Sibling rivalry is relatively common and normal in children. When a sibling is born, suddenly, in one fell swoop, the first-born is no longer the ruler of the house. Now they have to share the throne with someone else, someone who seems to require more attention and get more adoring looks and smiles. Somebody to compare themselves with.

When a child loses that coveted position where they felt so safe and loved, it scares them. They’re afraid of losing their privileged spot, where everyone noticed them, protected them, and loved them. That secure love starts to feel threatened.

Having been dethroned, the child starts to think that they’re no longer important to their parents. They want to get the same amount of attention that their new little sibling gets. This is the start of an unending battle for the attention.

When a younger sibling is born, the first-born child starts to feel frustrated and powerless. Fearful, catastrophic thoughts start running through their mindl. They start to believe they don’t deserve the love they once received.

Now it feels like they have to compete for that love. They have to do something to get back to that level of pampering and attention that they used to receive without even trying.

Normally, this level of jealousy between siblings starts to disappear as they get older. But it becomes a problem when the jealousy, which is logical to a certain degree, doesn’t go away and instead gets worse.

There are other variables that can come into play here. In fact, many parents often end up giving the jealous child more attention, but it’s still not enough for them. They get used to getting their way and receiving certain privileges that they otherwise wouldn’t have received.

It’s important to understand that every case is different. Some children are already prone to jealousy. Some children only throw fits of anger when they get a new sibling. For some children, the birth of a sibling triggers or occurs at the same time as an emotional disorder in a parent. Every family and situation is unique.

Understanding the origins of sibling rivalry

As every case is unique, the origins of sibling rivalry will vary too. It might have to do with the child’s personality, or the parents‘ affective style. It can also be a result of the family’s emotional state when the baby arrives.

Once the parents understand why their first-born child is so upset, they can respond more effectively. The child needs empathy. They have their own emotions and are just as worthy of respect as anyone else, no matter how young they are. But parents also can’t allow those emotions to cause more suffering and chaos in the family.

The child must be punished for their fits of anger towards their younger sibling, whether you do it by taking away some attention or by only giving them attention and approval for good behavior.

It’s important to acknowledge, value, and reinforce anything they do that shows cooperation and self-confidence. Because this is essentially what they’re asking for, even if they don’t say it out loud. They want to feel secure and have confidence in themselves and their environment.

Unstable, constantly changing environments throw a child’s emotional development into chaos. Therefore, as much as possible, parents should create a healthy environment where the child can feel secure in how much they’re loved. Children often learn by imitation.

That’s why it’s so important to ingrain values in them that they can apply to their interpersonal interactions. Values like solidarity and being happy for other people. Instead of viewing their peers’ achievements with anger and envy, they’ll see that it doesn’t affect their own security. As a result, their worldview will shift and become healthier. And there will be less sibling rivalry.

It will be hard for the child to be happy for their sibling if the parents ignore their achievements. Instead, they’ll constantly compare themselves with the “usurper.” Children feel more secure in an environment where their positive attributes are valued, instead of one where their failures are constantly being pointed out. Parents should praise their healthy behavior and try to extinguish maladaptive behaviors that can lead to disorders.

Why Anger is Poisonous For Our Minds and Bodies
There are many different types of anger, ranging from annoyance to full blown rage. If we don't try to control our anger we could be doing serious damage to our bodies. Read more »
Link copied!
Interesting Articles
Psychology
Discipline and Love: How to Educate a Child

When we establish radical positions about our children's education, we lose control of the situation. So, we go towards the…

Psychology
Positive Thinking - 5 Ways to do This

Did you know that the saying "When one door closes, another one opens" is in the novel by Miguel de…

Psychology
9 Tell-tale Signs that it's Time to Rest

In the whirlwind of life we so often just let inertia carry us. However, this inertia doesn't usually include listening…