Art Therapy as a Treatment for Psychosis

The relevance of the study of art therapy as a treatment for psychosis is about a change of perspective in regard to mental illness. 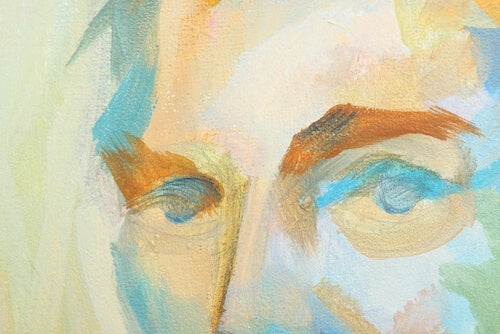 Field observations about art therapy as a treatment for psychosis indicate that this type of work can strengthen a patient’s functions. In addition, it improves their sense of competence and self-esteem. It’s also a space that allows them to contain psychotic anxiety and a vehicle for interpersonal relationships. Today’s article will explore this in more depth.

Firstly, what’s psychosis? Dictionaries define it as “a severe mental disorder in which thought and emotions are so impaired that contact is lost with external reality”. Thus, given its complexity, there are various possible treatments and therapies available. The art therapy approach, in this regard, consists of the use of art materials for self-expression and reflection, in the presence of a trained art therapist.

Psychotherapist Katherine Killick argues that, in psychotic people, art objects support the projected material until patients may be able to relate to their therapist’s mind. The work focuses on offering a structure with time and limits that favor notions of time and structure in their minds.

Thus, Killick explains that one of the functions of the therapist in art therapy is to develop ways of mediation between concrete and symbolic thought. Furthermore, in the author’s words, one of the central aspects of the therapeutic use of art in people with psychosis is that it addresses problems related to ego boundaries and symbol formation.

The interpersonal relationship in art therapy

Killick identified three areas of communication within the art therapy relationship. These are relevant when working with people affected by schizophrenia in their interpersonal, intermediary, and intrapersonal communications. In fact, these interrelate and exert a continuous influence on each other.

According to Reyes, Killick refers to the potential for creating images. In other words, the therapist maintains it with their patient. In this area, the person develops a unique interaction with artistic materials that can heal the formation of symbols.

In this area, the therapist creates a play space in which the patient can experiment with objects in a symbolic activity.

This area is the part of the relationship between patient and therapist that includes images.

“Nash’s genius was of that mysterious variety more often associated with music and art than with the oldest of all sciences. It wasn’t merely that his mind worked faster, that his memory was more retentive, or that his power of concentration was greater.”

The expression of creativity in the treatment for psychosis

To create something new is to do; to do is to produce, and production has – not from a utilitarian perspective but from a psychosocial perspective – great social, affective, and cognitive value for the subject involved in the task. The word “create” derives from the Latin creare and from “raising”, which means something begins to exist where it didn’t. The word is also etymologically associated with “growing”.

The relevance of the study of creativity in psychosis pertains to a change of view on mental illness. It’s a serious condition that produces considerable cognitive, affective, emotional, and social deterioration, though. However, therapists must also recognize that everyone has potential. Thus, they can foster and help develop it, providing another place and social role to an individual within their community.

Art therapy as a treatment for psychosis

Individual pharmacological psychotherapy is a common treatment for psychosis. However, this type of treatment doesn’t always reach the goals of interdisciplinary treatment. This is why art therapy can be very useful in the treatment of patients with severe problems, such as psychosis.

Art therapy is an intervention modality located within the group of support psychotherapies. Supportive therapy is long-term targeted therapy, to maximize the patient’s strengths; it restores and recognizes a person’s psychological balance while trying to minimize their dependency on a therapist.

The characteristics of self-expression and reflection

Art is a flexible plastic language. It’s a way of communication of a patient with their internal world. There’s an alteration in the relationship with the external world in psychosis. Thus, art can be the route to communicating their feelings, fantasies, and fears. Similarly, they help the health professional empathize with some of the experiences of their patient.

Psychotherapeutic effects of art therapy as a treatment for psychosis

According to authors María Aranguren and Tania Elizabeth León, some of the effects that art can provide as psychotherapy are:

Thus, it seems clear that art therapy in psychosis can foster the development of psychological states and abilities that can induce some psychic change. The purpose of these types of therapies is to improve the quality of life of those affected by psychosis. It seems important to take them into account, at least as complementary treatments.

Psychosis: What Is It, What Causes It, And How Do You Treat It?
We can define psychosis broadly as: "a mental disorder in which mental functioning is sufficiently impaired as to interfere grossly with the patients capacity to meet the ordinary demands of life." Read more »
Link copied!
Interesting Articles
Therapies
Counseling Skills for Psychotherapy