What does workplace depression refer to? Why does it appear and what symptoms does it cause? Is it the same as major depression? How can it be treated? Find out by reading this article. 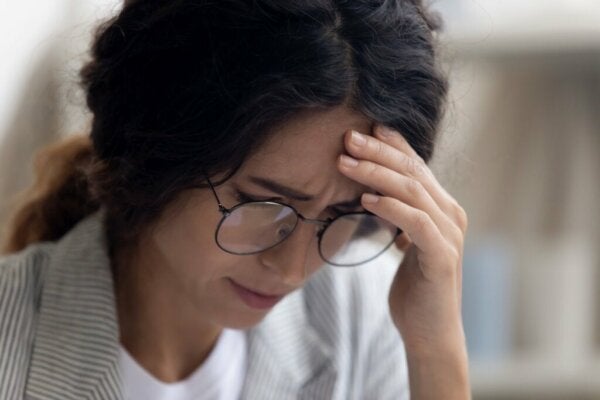 However, these aren’t the only causes. Do you want to know more about them, as well as symptoms of this disorder, and possible treatments to fight it? Then keep reading.

Workplace depression: what does it consist of?

Workplace depression is one of the main causes of getting sick from work. It’s actually a depressive disorder, but, in this case, it’s caused by work.

People spend a large part of their lives at work, some may even spend more time there than at home. When their work doesn’t make them happy, they may feel pressured and stressed, which can lead to this condition appearing.

Workplace depression appears as a result of, you guessed it, work. Specifically, it appears when it negatively interferes with the person’s life. This effect can have its origin in a large number of causes: excessive pressure, mobbing situations, demotivation, being treated unfairly, among others.

The symptoms that may appear in someone suffering from workplace depression would be the same (or similar) to those that appear in depression. Some of the most prominent, according to the Diagnostic and Statistical Manual of Mental Disorders (DSM-5), are the following:

All these symptoms, without a doubt, negatively affect the person’s life – many of them being directly related to work. Basically, the individual may have nightmares related to work, for example, or have difficulties sleeping thinking about the worries they have because of it.

As for the causes of this disorder, as we mentioned above, they’re based on work. The most common are the following:

When a person suffers from one or more of these situations, work depression can appear continuously over time. It’s true that everyone’s affected in one way or another by the situations they experience. However, some individuals are definitely more prone to developing this disorder which, as a consequence, may lead them to request sick leave (although it may not be granted to them).

Intervention against workplace depression should follow the lines of treatment for major depressive disorder. In addition, it’s really important to consider the contextual, causal, and maintenance factors of the disorder in the individual, bearing in mind that they’re connected to their work. To articulate this pillar, it’s essential to make a good differential diagnosis in order not to confuse burnout syndrome with depression.

In this sense, it’s vital to treat the symptoms derived from the subject’s own experience in the workplace while also taking into account the physical and psychological symptoms that workplace depression can cause.

According to the Guide to Effective Psychological Treatment by Pérez et al. (2010), there are four well-established (effective) treatments for depressive disorder; behavior therapy (including various modalities), cognitive therapy, interpersonal therapy, and pharmacotherapy. As for less proven therapies, but with promising results, we find psychodynamic psychotherapy and systemic therapy the most commonly used.

As for behavioral therapy, it usually includes programming pleasant activities for the patient; training them in social and problem-solving skills, as well as time management and other techniques. When it comes to cognitive therapy, it’s imperative to work on the patient’s cognitive distortions, as well as their negative thoughts, especially through cognitive restructuring.

On the other hand, interpersonal therapy seeks to promote the quality of the patient’s social relationships, as well as the social support received. Finally, regarding pharmacotherapy, antidepressant drugs and anxiolytic drugs are especially used.

Anxiety and workplace depression are two of the most common causes that lead a person to request sick leave. This is suggested by the WHO, which places them as the main causes of sick leave in Spain in 2020. As you can see, workplace depression is a serious but treatable disorder; it can and should be treated with the appropriate professionals and with a treatment adapted to the patient’s needs and characteristics.

Moreover, it’s important to avoid feelings of guilt for requesting sick leave for this reason and to fight against stigmatization and all prejudices associated with mental health. If no one bats an eye when a worker requests sick leave when they have a broken leg or need surgery, why should people with depression be denied it?

Finally, maintaining a vital balance, as well as listening to how you feel at all times and carefully identifying your needs, will help you seek help, feel better, and prevent these types of disorders.

Workplace Harassment: A Silent Reality
Workplace harassment takes place in a relationship between the harasser and the harassed. It takes place within a workplace and organizational environment. Read more »
Link copied!
Interesting Articles
Clinical Psychology
Do You Suffer From Anxiety-Induced Chest Pain?