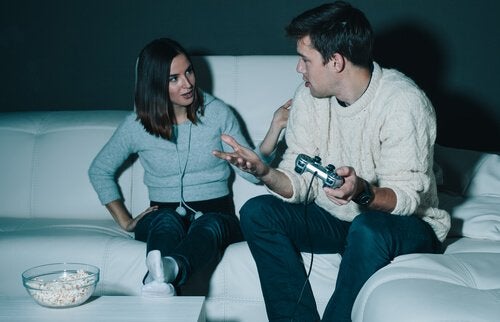 Video game addiction is a very hot topic. Technological advances, along with the influence of the internet, have give more people access to games, especially online ones. In fact, online games are the ones that concern psychology professionals the most because of how easily they can cause serious addictions.

But where do we draw the line on what we call an addictive behavior? Is everyone who plays too many video games addicted to them? Let’s dig deeper into these questions.

What is video game addiction?

Excessive activity and addictive activity aren’t the same thing. What sets them apart and what makes it possible to diagnose something as addiction is how much of an interference it is in that person’s life. That is, someone with video game addiction will miss out on a lot of their life because they’re playing video games.

To identify video game addiction, and to be able to prevent it and treat it, you have to know that there are some important behavioral indicators. To give you an idea, here are some associated symptoms:

The only very recent awareness and the fact that there isn’t much research about it have resulted in few treatments available for video game addiction. There are other factors that make it harder to progress on this front too, like the growth of the video game industry, the relatively low cost of the addiction, and the general population’s permissive attitude about these kinds of activities.

But there are still some things you can do to prevent it. The groups that are especially vulnerable are kids and teenagers. That’s why there are methods directed at parents and educators who might think they might have a video game addict on their hands. In that situation, these are some things they can do.

Of course when it’s an adult with the video game addiction, that’s a different story. There are clinics specifically for adults, even though they’re much less prone to it. The philosophy of said clinics is to show people that they can enjoy the real world just as much as the fantasy world.

What Are Our Addictions Hiding?
Addictions are behaviors that generate a dependence on substances, actions or even people. Addicts are so hooked, their lives revolve around the addictions. Read more »
Link copied!
Interesting Articles
Educational Psychology
Seven Famous Erik Erikson Quotes

Erik Erikson worked as a teacher until he met Anna Freud. The daughter of the famous psychoanalyst inspired him to start…

Some people think it's easier to leave your partner than it is to be left. But that's not true. There are…

Have you ever stopped to think that some people are more hurtful than they are helpful? Maybe you haven't noticed…

Psychology
Suffering In Silence, Such a Human Thing

A lot of us do it. We hide in our little shell to suffer alone, quietly, and without anyone noticing.…

Psychology
The Benefits of Coloring Mandalas

Coloring mandalas gives you the opportunity to develop your attention and achieve a greater state of relaxation, whatever your age.…

Like Facundo Cabral once said, "we should just eat grass, millions of cows can't be wrong." He's referring to the irony…