Humanity has some serious problems to solve, but many people spend too much time solving some fictional difficulties. These are sometimes generated by countless simple things that suddenly became unnecessarily complicated. We'll analyze it below. 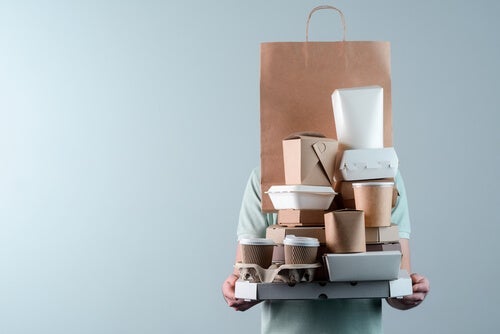 We live in contradictory times, in which extremely complex matters have become simple and simple things have become complicated. These days, it’s relatively easy to connect even from different parts of the planet in a matter of seconds, but saying hello to a neighbor can be a big feat.

To a large extent, consumerism is a factor that has led us to add artifice to simple things. Just as modernity brings fantastic advances that we should take advantage of, it’s also possible that some important values of the past could come in handy now. Here are three simple things that have become complicated.

1. Eating, one of the simple things that have become complicated

Eating isn’t optional because if we don’t eat, we die. However, until just a few decades ago, food was just part of the simple things of life. There was no great mystery. People ate what was available, trying to prioritize what had more nutrients and was more palatable.

However, today, food is one thing that has become more complicated. In our time, practically all foods cause some harm and the subject of diet has become very complex for some people. Lactose-free milk, decaffeinated coffee, sugar-free, salt-free, flour-free, gluten-free, meat-free, fat-free; not too much of anything, but not too little either. Don’t combine this with that…

Things could be much simpler in this regard. On the one hand, it’s a good idea to not eat things to excess. This is common knowledge that’s been around since the time of the Stoics and this hasn’t changed. On the other hand, the less ultra-processed food you eat, the better.

You shouldn’t consider eating a threat, but it also doesn’t have to be an amazing ritual. It’s more simple than that.

2. Getting dressed, a blind endorsement of consumerism

Consumerism has reached absurd levels. Surely many people know their grandparents and great-grandparents only bought new clothes occasionally. The products were of such good quality that people could pass them down from older brother to younger or from father to son.

What people were looking for was clothing to warm them sufficiently if it was cold or to allow them to feel cool if it was hot. The criteria for getting dressed on a day-to-day basis were utility and comfort. For this reason, people bought garments that were durable, well made, and of suitable materials.

Clothing always had something to do with aesthetics. However, our ancestors only gave this relevance to that aspect on special days or moments. It was common for everyone to have their Sunday dress to wear on days when there was no work or for special celebrations.

This is very difficult in today’s world, especially for some people that are extremely focused on the opinion of others or are people-pleasers. Changing trends make certain garments obsolete and guarantee high consumption. This is a perfect example of one of the simple things that have become complicated.

3. Simple things that have become complicated: having fun

It’s puzzling that fun also fits onto the list of simple things that have become complicated, but it does. People have created hundreds of options for fun, but the bottom line is that they aren’t really that fun. Instead, they allow us to pass the time or entertain ourselves for a while.

Celebrities are created, often by force, and people make huge amounts of money from concerts and shows. Many people today are spectators of this kind of entertainment, but not really active participants. However, people have forgotten that a good conversation, a simple game, a dance, or a good read are actually fun.

The word “divertido” (fun in Spanish) comes from the Latin root divertere. This means “to turn in the opposite direction, to recreate”. However, this isn’t what happens in much of today’s “fun”. Instead, it’s quite the opposite, since we’re immersed in an internal reiteration of the same trends.

Food, clothing, and fun could be simpler and more accessible. Perhaps making things simpler is part of the way to regain wellness.

5 Simple Ways to Boost Your Self-Confidence
There are many ways to boost your self-confidence. This article shows you five simple but effective ways you can be more confident. Read on! Read more »

Link copied!
Interesting Articles
Sayings
The 7 Lessons of Bushido, the Way of the Warrior

Wellness
If You Feel Alone by Yourself, Then You're in Bad Company

Why do we have this tendency to run away from solitude? Why do so many of us prefer to be…

Wellness
Love Yourself Enough to Know When to Leave

If there is something really hard to do, it is knowing when to walk out of a person's life to become a loved…