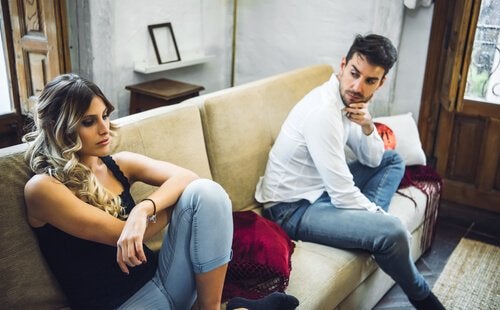 Thanks to our idealized notion of love and self-help books that pretend like we can live a stress-free life, it has gotten harder to love. There’s one thing that was better in the past: the way we dealt with relationship tension. At the very least, couples didn’t see it as anything extraordinary. They accepted it as normal.

Things are very different nowadays. It seems like we think there have to be no problems for love to be real. Relationship tension is seen as a huge red flag, proof that something isn’t right.

“Love is of the physical. Marriage is a matter of chemistry.”

People now don’t seem to accept the fact that when two people are in love they might hurt each other. However, the one thing doesn’t rule out the other. It’s actually the opposite. Most of our relationships fall short of our ideal. But they can still be strong and long-lasting.

There’s nothing new about starting a relationship. Actually it’s more like picking back up on scripts we bring from the past. It’s the unfinished love story you’ve been writing since the moment you were born. It’s all the failed or amazing loves that aren’t there anymore. You never enter into a new relationship totally fresh, like a blank canvas.

The roots of relationship tension

The first thing that leads to relationship tension is a breakdown of romantic expectations. But that doesn’t mean the other person pulled one over on you. What ends up tumbling down, at least partly, is that bundle of dreams and goals you usually start a new relationship with. And that’s even more true when you feel like you’re with the “love of your life.”

It’s totally normal to idealize the other person. It’s just a piece of the whole package of psychological processes that start when you’re falling in love. Some people do it more than others, but there’s always at least a little bit of it in every case.

And it’s also normal for there to be a chain of little disappointments. You realize that the puzzle actually is missing some pieces. Unlike what you thought at first, this person really does bore you sometimes. They even annoy you sometimes too. And maybe they’re more ordinary than they seemed at first.

This is what will mark the beginning of the end for a lot of new couples. For other ones it’s just a phase. Real interest sticks around, and so does compatibility. That means the affection is stronger than the disappointment.

So then, relationship tension doesn’t have to be more than a roadblock. If a person decides to be dramatic about it, they’ll crash into their expectations and reality.

Everything falls into place after a while

The downturn in romantic expectations is just the beginning. Two people might be very smart and realistic, but when they become a couple, certain aspects (ideas, thoughts, behaviors, emotions, etc) aren’t in the right place anymore. There are plenty of times in any stable relationship where both people ask themselves if they completely messed up on who they chose as a partner.

That‘s how love is: contradictory. Relationship tension is the rule, not the exception to the rule. And there isn’t any kind of relationship as full of differences as a romantic relationship.

A mistake you might easily forgive with a child or a friend might blow up completely when it comes to a partner. All passions, including anger, are just part of the normal routine.

The partnership isn’t just based on affection. It’s also based on strong psychological mechanisms that are usually unconscious. So when one person doesn’t obey these unwritten rules, relationship tension surfaces.

Some people don’t accept that this is just how true love is. They don’t want to reject the fantasy of a perfectly balanced relationship that brings together perfection with the idea of love with a capital L.

But they also don’t want to reject love that balances out their flaws. The kind where there’s no relationship tension, just constant happiness and a “happily ever after.” The kind of love that doesn’t need forgiveness. But they’ll never find it because it just doesn’t exist.

Don’t Search for Perfect Love…Build Real Love
Now is the time to think about the love that you need.  Don't search for a perfect love, build a love that is real and conscious. Read more »
Link copied!
Interesting Articles
Psychology
The Emotional Vampire: Science Confirms It, Some People Consume Our Energy

We might call them emotional vampires.  Parasitic. They're the type that infects us with their negative emotions until they've drained all…

Many of us want a few days free from worries and schedules so that we can relax and let go of that built up stress. We leave things hanging for those…

The Experiment is a German movie about human nature from 2001. It was directed by Oliver Hirschbiegel. It is based on the play The Black Box. This play was inspired…