Aestheticism: The Art of Beauty

Aestheticism was an artistic movement born against Victorian morality and rigidity. Instead, it saw beauty as the ideal, motivating individuals to live as if their lives were a work of art. 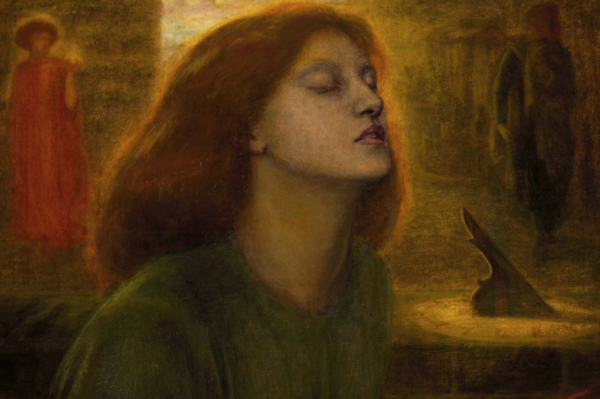 Aestheticism was an artistic movement that arose against the traditions and rigid rules of the Victorian era. In this historical framework, people saw art as a transmitter of moral or socio-political messages. Aestheticism breaks with that idea and, instead, calls for freedom of expression against the restrictive Victorian conformity.

The very heart of aestheticism is “art for art’s sake”. It refers to a search for beauty, sensuality, creativity, and overall good taste. It focused on the exploration of color, composition, and form in order to seek beauty above all else. What seemed like an artistic movement was actually a revolution in the world of ideas, which expanded beyond what was considered art until then.

Painting, sculpture, and architecture were all part of this movement. However, aestheticism also moved in its purest essence to the everyday world; fashion, ceramics, home decor, furniture, and literature. Relevant figures of the moment, such as Oscar Wilde, adopted aestheticism as a way of life and lived their lives according to their principles of free expression of beauty.

Furthermore, it represented a rebellion against Victorian materialism, ugliness, and industrialism. At the same time, aestheticism ruled out industrial products with impoverished designs, created as consumer items and made by “soulless machines”.

Also, it rejected the Victorian artistic elements such as delicacy, curvilinear forms, and the abundance of ornament. Instead, it opted for a return to craftsmanship in the creation of all artistic expression. Geometric designs, simple linear shapes, and subdued colors became more important.

The aestheticism movement began in 1851 after the Great Exhibition of the Visual Arts of Great Britain. The goal of this event was to show the world great innovations, especially in photography. However, as a result of industrialization, the designs of the art featured in the exhibition were dehumanized.

There was a reduction in predictable and repetitive works because, in a way, they created a suffocating environment for artists who wanted to explore their artistic ways of expression. Shortly after that, a group that called themselves Pre-Raphaelite artists began to use a different aesthetic expression in their works. They made it simpler and found inspiration in the rich colors and intricate designs of medieval art.

From this group came the aesthetes. Younger artists such as Dante Gabriel Rossetti, William Morris, and Edward Burne-Jones joined forces to create a “cult of beauty”, which later laid the foundations of the aesthetic movement. They developed a new idea of ​​female beauty that challenged Victorian moral ideas about sexual debauchery.

At the time, Japanese art was entering the British market strongly and had a great influence on aestheticism. Its geometric patterns, circular designs, and simple, stylized organic motifs contrasted with the crowded Victorian aesthetic. For that reason, beauticians began to incorporate these elements into their works.

The expression of aestheticism in its different branches

Paintings were the basis of this movement. Without a doubt, it was the easiest way to develop the adage of “art for art’s sake”: the function of its pieces of work could only be aesthetic, they could have no other utility than beauty. Peacocks, fans, vases, feathers, and simplified shapes began to fill the canvases.

The architecture deviated from the classical tradition and joined disparate styles to create structural designs. Artists started combining renaissance, oriental, and Italian references. The characteristic of the architectural aesthetic movement was the replacement of the traditional British lobby by the so-called “Arab hall”, a vaulted room that welcomed different styles of Middle Eastern design.

Within the aesthetic movement, the figure of the designer began to become more relevant. Artists who designed furniture, textiles, or ceramics became known for their work. Aestheticism defended that the interior of a house should be as beautiful as possible in order to provide continuous inspiration to its inhabitants.

On the other hand, fashion was also greatly influenced by this movement. It was possible to see through the gradual abandonment of corsets, the use of lighter fabrics, and more bohemian and unstructured designs. Men incorporated the characteristic element of aestheticism, the peacock, in their personal aesthetics.

Literature had Oscar Wilde and Algernon Charles Swinburne as the highest representatives of aesthetic expression. Their work moved away from moral and social messages and, instead, created poems and prose full of sensuality. Literature got rid of open statements and opted for suggestions.

It was a whole revolution of ideas against ugliness and materialism. This movement referred to the isolation of the individual from society to find inspiration from within to search for beauty and emotion.

Both psychology and philosophy have studied this movement. Although the concept seems somewhat abstract, the truth is that it represented the beginning of the validity of the idea of introspection and beauty as means of inspiration. One of the most important premises of aestheticism was to live life intensely, having beauty as the only ideal and as if life itself were an immense work of art.

Aesthetic Intelligence: The Ability to Sense Beauty
Aesthetic intelligence is the ability to perceive beauty in your life. In this article, we talk about a book by Piero Ferrucci that explains the concept. Read more »
Link copied!
Interesting Articles
Art and Psychology
Alexander Pushkin Quotes on Existence

Jean-Michel Basquiat was creative, irreverent, surprising, and sensitive. He was a symbol of urban art and of the mixture of…

Art and Psychology
The Relationship Between Psychology and Photography

Psychology and photography may seem to have nothing in common. However, they're more similar than you might think. Today's article…