Together but not Tethered: the Sioux Legend about Relationships 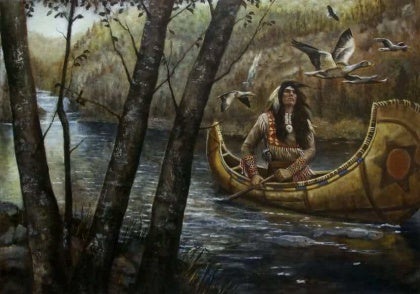 According to an old and beautiful Sioux legend, for a relationship to last and be happy, both members should fly together but not tethered, never slaves to each other. Because true love doesn’t chain us. It unites two individuals in one single project without either needing to reject their own being, their own identity.

It’s strange that the Native American’s ancient wisdom is still around today, inspiring us with stories and legends. Sometimes they’re magical, but they always give us a valuable wake-up call. Somehow the stories continues to be useful and significant to us. Out of all this wisdom, the Sioux nation has helped us most.

“One by one, we’re all mortal. Together, we’re eternal.”

We have them to thank for the legend of the dreamcatcher, and also this gem of a fable that teaches us a simple but deep lesson about how to build a stable and happy relationship. Thankfully, we have access to the fascinating book, “American Indian Stories,” by Zitkala-Ša.

This interesting author was the first Sioux Indian educated in the West. She was a defender of her nation’s traditions, a violinist, and above all an activist. It was her, at the beginning of the 20th century, who granted us part of her cultural legacy. She gave us simple and wonderful texts, including this delightful legend we’re going to go into now.

Love, the Individual, and the Relationship according to the Sioux

There’s an old legend about a young Sioux couple that went to see the village shaman one morning. They lived close to Paha Sapa, today known as the Black Hills, which are sacred to the Sioux nation. The young man was a brave warrior and had honor and nobility living in his heart. Touch the Clouds was a woman with almond-shaped eyes, a thick head of hair, and determination in her heart. But most of all, a deep love for the man who was going to be her husband.

The reason they decided to see the shaman was very important: they were afraid. They were scared that their promise, the devoted love they were professing to each other would end up breaking. They were also scared of dying and not being able to find each other in the afterlife. They wanted the old witch doctor to give them some potion, spell, or enchantment that would make their love eternal.

The old shaman looked at both of them for a few seconds with his hawk-nosed, deeply lined face. He smoked a few pipes, wrinkled his brow, cleared his voice, and then took the girl’s hand:

Afterwards, the shaman turned to the young warrior.

The young Sioux girl and her beloved completed the challenge set by the old shaman. She brought the falcon inside a leather bag. The young warrior carried his eagle. The most beautiful, the strongest. When they came to the old shaman, they both asked what the next step would be. “To sacrifice the birds and bathe each other in their blood, maybe?” they asked.

When they had completed this request, they were astonished and speechless when they saw what happened. When the two birds tried to take flight, all they could do was fall down over and over again. Frustrated and full of anger, they started to peck at each other.

The old shaman went and untied the birds. This is the spell I’ll give you: learn from what you just saw. If you tie yourselves to each other, even with love, the only thing you will achieve is to pull each other down, hurt each other, and be unhappy. If you want your love to last, fly as high as you can: together but not tethered. Because true love doesn’t chain us.

The Emotionally Ecological Couple: Together but not Tethered

“Together but not Tethered,” by Jaume Soler and Mercè Conangla is another book that’s just as interesting. It perfectly explores the main idea of the old Sioux legend. These authors propose that we should construct what they call an appropriate “emotional ecology.”

“Being able to laugh together…now that really is love.”

In the complex challenge of establishing a stable, happy, mature, and rewarding partnership, we must create a balance in our strengths and our space in order to create an environment where you can “be true to yourself and still true to your relationship.” And we must never lose our identity, self-love, self-esteem, and our secret dreams.

In conclusion, we should also remember that we can apply the legend and the principal of “together but not tethered” to any kind of relationship. It can be a friendship or even a parent-child relationship. Because at the end of the day, we have to guard our personal space in order to preserve the magic of the bond.

It’s something worth thinking about.

A Growing Relationship: You and I Will Grow Together
Smile. Hug. Admire each other. Cultivate your love. Caress each other. Excite. All of this and more is what makes up a growing couple or relationship. Read more »
Link copied!
Interesting Articles
Psychology
Dealing With Fear: The Horror Movies You Play in Your Head

Conscious attention, meditation, mindfulness, or Sati, as they call it in Pali, is a practice where we become aware of the different…

Psychology
8 Steps to Help You Find Your Passion

Pursue your dreams. Follow your own path. Do what you love. How many times have you heard or read things…

Psychology
Lack of Internal Communication in a Company

New technologies are really beneficial in this day and age. However, at the same time, they've caused a series of…

Do you think that arguing well can be an art form? Maybe not, but arguing doesn't have to turn into…

Sadness is part of life and nobody can escape it. However, there are certain stages of life when we're more…