A Society High in Cholesterol and Low in Spirits 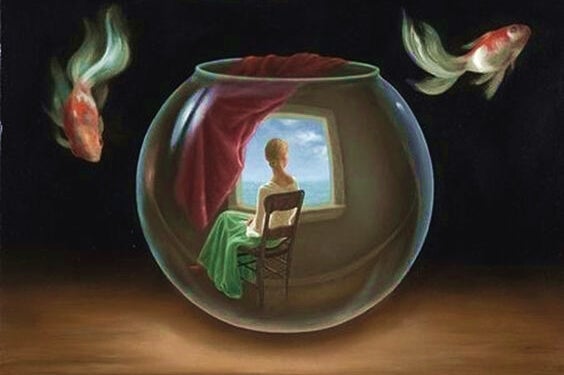 We are a society where suffering remains a silent stigma. We take pills for life’s pains, we treat our high cholesterol and our low spirits. And at the same time people ask us how we are feeling, as if depression is simply that: an everyday cold, or an infection to be cured with antibiotics. Health care professionals say that they can’t afford it – that every day they attend to dozens of people with clear indications of depression or some other anxiety disorder. It is as if society were the pupil of an eye that dilates when entering a gloomy room, where the darkness suddenly grips us.

“The birds of sadness can fly over our heads, but they cannot nest in our hair”

Suffering attaches itself to the body and to the mind, it affects our backs, our bones, our soul. Our stomach burns and our chest tightens. The sheets envelop themselves around us, like the tentacles of an octopus inviting us to stay there, away from the world, from light, from conversations and from the murmur of life.

The World Health Organization warns us that in the next 20 years depression will be the biggest health problem in the Western world, and that to stop the impact this will have on our world, we don’t only need measures, tools and well-educated professionals. We need awareness and sensitivity. We need to remember that none of us are immune to suffering a psychological disorder at any given time. We cannot trivialize suffering. It is very beneficial to try and understand it and deal with it and, above all, to prevent diseases such as depression.

Depression as a stigma and personal failure

Marcos is 49 years old and a nursing assistant. Two days ago he was diagnosed with an anxiety-depressive disorder. Before asking for an appointment with the specialist himself, he had already felt the shadow of that depression looming, perhaps because he recognized similar symptoms to that of his mother who spent terrible lonely times shut away in her bedroom. This was a time that had a terrible impact on his childhood.

Now it’s his “turn”, and although they have instructed him to take time off work, Marcos refuses to do so. He is afraid to tell his co-workers (doctors and nurses) what is wrong with him because he is embarrassed. For him, depression is like a personal failure, an inherited weakness. Added to the memories of his mother he is invaded by thoughts that gnaw away at him and grind him down. His mother was a lady who never went to the doctor’s and who spent most of her life subjected to a dizzying emotional big wheel of constant ups and downs.

Marcos has gone to the psychiatrist and tells himself that he is doing the right thing, because the medication will help him, because it is just one more illness to treat, such as his hypertension, cholesterol or hypothyroidism. However our friend is wrong, because, even though the pills for life’s pains may help, they just aren’t enough. The fact is that depression, like many other psychological disorders, needs three more elements: psychotherapy, a life plan and social support.

The low spirits, the high suffering and the eternal ignorance

We are used to hearing that suffering is part of life, and that sometimes a painful experience helps us to be stronger, and to grow. However, it has escaped our attention that there is another type of suffering that seizes us for no apparent reason, without a detonator, and like a cold wind that extinguishes our mood, desire and energy.

Life’s sufferings are the great virus of the 21st century human being. They can’t be seen, can’t be touched, but they do cause havoc. Then an instruction manual gives a name to what is happening to us and we end up as just another label, to the point that many health care professionals err on the side of the scientific model. They forget that each patient with depression is unique, with their own clinical attributes, their own personal story, and that sometimes the same strategy doesn’t work for everyone.

On the other hand, one more problem we face when dealing with depression is that in many countries there is still no adequate protocol to deal with it. Primary care doctors usually diagnose it and just treat it with drugs. If there is no improvement in the patient then they are referred for psychiatric help. All of this shows once again that mental health problems are not sufficiently recognized, even though the evidence is there: 1 in 6 people will experience depression at some point in their lives.

In the same way, to the sometimes deficient approach of the medical system with this type of illness we can add the social stigma mentioned above. The magazine Psychology Today has an article which invites us to reflect deeply about this issue.

If the population of any given city is told that depression is due “exclusively” to neurobiological causes, then there is a greater acceptance of it. Moreover, visits to the psychologist or psychiatrist will increase because you stop blaming yourself for that supposed “weakness”, that lack of courage due to being overwhelmed by discouragement and suffering

Unfortunately, as we can see, we are still rooted in this foundation of ignorance, where certain illnesses are still synonymous with madness, a weakness, or a defect that has to be hidden. It is time to rebalance, to understand and, first of all, to reflect on those other conditions that do not need a plaster cast, or that do not require either stitches or drops every 6 hours.

Let us stop underestimating suffering and learn to understand it, be active, and, above all, neighborly.

Wellness
The Heart Needs Vitamins A, B, C: Affection, Benevolence, and Countless Hugs

The heart demands nutrients and although it may sound a bit cliché, I know that mine needs vitamins more than…

Wellness
Love is Sharing Your Soul

Below your skin lives your soul. At times, it is hidden between doubts, kidnapped by fear. Other times, it is brave, showing the wounds it has suffered over time. However,…

Wellness
Obstacles are Opportunities for Growth

In life, we must overcome obstacles in order to grow. Sometimes, timing and circumstance are against us and it is…

Wellness
I Have Problems With Everyone. Am I The Problem?

There are days where we get up in a bad mood, wake up on the wrong side of the bed,…

Emotional language is a way of expressing feelings and emotions and at the same time, it is a channel that connects…