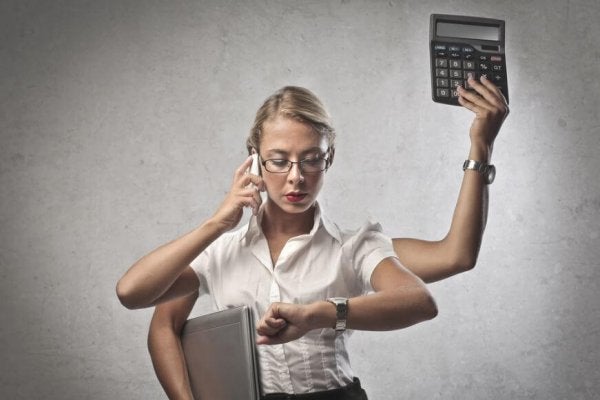 The accelerated rhythm of the life we live produces a lot of stress. Every day, more people suffer from the stress produced by the obligations that they’ve taken on. We occupy ourselves with so many things at the same time, and on top of that, we want to do them all well and quickly. This level of demand, along with the pressure of shouldering so many responsibilities, ends up taking a toll.

There are more and more studies that explore the consequences of prolonged stress on our bodies. The results show that being in a lasting stressful state is very dangerous for our health. It’s very difficult to live a life free of worries, but the attitude we have towards them is game-changing. Psychosomatic illnesses are just one example of the importance of our mental state and the connection between mind and body.

Cortisol, the cause of many illnesses

Cortisol is a thyroid hormone produced by the adrenal gland that gets released when we’re stressed. When it’s released for a long period of time, it’s dangerous for our health. Cortisol causes glucose to be released into the blood so that it can send a lot of energy to the muscles. The aim is to give us enough energy to handle emergency situations.

When stress goes away after a normal amount of time, the body resets its hormone levels back to normal. When the situation lasts for a long time, adverse symptoms appear, such as:

Psychosomatic illnesses are those that develop due to stress or any other type of psychological distress that gets expressed as a physical illness. The DSM-5 has cataloged them under Somatic Symptom and Related Disorders. The absence of physical or biological proof that would explain the symptoms makes it difficult to find an effective treatment for the problem.

There are different symptoms that occur, but all are sources of distress and make it difficult to live a normal daily life. There’s no associated physical cause that can explain them. Thus, it’s important to figure out whether it’s a psychosomatic illness so that the patient can find a solution and be referred to a mental health specialist.

The symptoms can be general or specific, and sometimes they’re normal sensations (like the sensation of being hungry) or confused with symptoms that are characteristic of minor illness (like the common cold). The most frequent symptom reported by these patients is pain.

Scientific studies that demonstrate the relationship

According to the Texas Heart Institute, stress is one of the factors that most increases the probability of suffering from a cardiovascular illness. They argue that stress increases heart rate and blood pressure, which increases the heart’s need for oxygen.

The journal Nature published an article that stated that there’s a direct relationship between stress and cancer. The experiments conducted by Tian Xu revealed that “stressed” cells can emit signals that induce the generation of tumors, affecting nearby healthy cells. The positive side of this discovery is the possibility of having a new route to combat cancer by intercepting and blocking the stress signals that cells send each other.

A group of Argentinian researchers identified stress as a trigger for the onset of dementia in their studies. According to the group led by Dr. Reich, stress can trigger a degenerative process in the brain and transfer it to the neuroendocrine and immune systems. Although this doesn’t imply a direct causal relationship, it would be interesting to continue investigating to what point a relationship exists.

In some way or another, it’s clear that a continued state of over-activation in the body saps the body’s defenses and makes us more prone to contracting illnesses. Psychosomatic illnesses don’t show up on an MRI or any other type of imaging, which is why identifying the origin is so complicated, and why patients so often reject the diagnosis.

My Chronic Illness Is Invisible, Not Imaginary

Gordon Allport (1897 - 1967) was a well-respected and influential American scholar in the psychology field. Allport came from a…

Psychology
When You Accept Your Polarities You Become More YOU

When you accept your polarities you become more YOU. You become genuine and authentic. You start down the path that will…