A Tale of Love and Madness 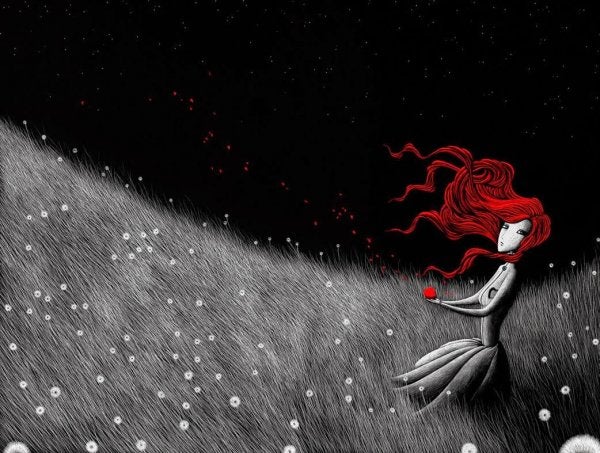 When Boredom had yawned for the third time, Madness, asked everyone: Want to play hide and seek? Intrigue raised an eyebrow and Curiosity, not being able to hold back, asked: Hide and seek? How do you play that?

“It’s a game in which I cover my eyes and start to count, from one to a million, while the rest of you hide. And when I’m done counting, the first person I find will take my place and continue the game,” Madness explained.

Enthusiasm danced, backed up by Euphoria. Joy jumped up and down so much that it convinced Doubt and even Apathy, who never cared for anything. But not everyone wanted to participate, Truth preferred not to hide. Why should he? In the end, they always find him.

Arrogance thought it was a foolish game, though truly what bothered her was that it hadn’t been her idea. And, as always, Cowardice, preferred to not take the risk…

“One, Two, Three…” Madness started to count. The first to hide was Laziness, who like always just dropped behind the first rock in the path. Faith went up to the sky, and Envy hid behind Triumph’s shadow, who had by her own merit climbed to the top of the highest tree.

Generosity couldn’t seem to hide. Every hiding spot she found seemed like a wonderful spot for one of her friends. For example, a crystal-clear lake was perfect for Beauty. The hole in a tree was perfect for Shyness. A butterfly’s wings was the best spot for Sensuality. A gust of wind would be magnificent for Freedom. So she wound up hiding on a ray of sunshine.

Selfishness, on the other hand, found a great place to hide from the start, ventilated and comfortable, but only for himself. Deceit hid at the bottom of the sea (not true, he really hid behind the rainbow). And Passion and Desire hid within a volcano. And Oblivion…I forgot where he hid…But that’s not important.

As Madness counted, Love still hadn’t found a place to hide. Everywhere was taken, until he saw a rosebush and decided to hide among the flowers.

“…a million!” counted Madness and begun to search. The first to come out was Laziness, hidden barely three steps away behind a rock. Then she heard Faith arguing with God about Theology, and felt Passion and Desire in the vibrations of the volcano.

She found Envy, and of course then figured out where Triumph was. She didn’t even have to look for Selfishness. He came out running on his own, since his hiding spot turned out to be a wasp’s nest.

She got thirsty after walking so much and discovered Beauty within the lake. It was even easier to find Doubt, as she was sitting on a fence, not being able to decide where to hide.

That’s how she found everyone…Talent was in fresh grass, Anguish in a dark cave, Deceit behind the rainbow (not true, she was at the bottom of the sea) and she even managed to find Oblivion, that I had forgotten was even playing hide and seek.

However, Love was nowhere to be found. Madness searched behind every tree, under each stream on the planet, at the top of every mountain…And just as she was about to give up, she saw a rosebush and some roses.

She grabbed a stick and started moving around the branches. When suddenly, a shout full of pain was heard: the thorns had harmed Love’s eyes. Madness didn’t know how to apologize. She cried, implored, asked for forgiveness and even promised to be her blind guide.

Since then, since the first time hide and seek was played on Earth…
Love is blind and Madness always accompanies it.

They say that the heart is a madhouse and that there’s always room for more craziness. Because we’re always capable of doing almost anything for love. To risk ourselves at an abyss and even set freedom free.

Because Love is also crazy thanks to miscalculation. Because we can’t choose it and it always wins any game, though sometimes we may end up covered in thorns. Because, as Calderón de la Barca said, when love isn’t crazy, it’s not love.

Educating our children in emotional intelligence is a necessary and essential task if we want them them to grow up to be healthy and strong. While we must work on emotional…

When we start a relationship, it's normal to feel full of hope and joy, on cloud nine. If everything goes…

Whoever said that a woman’s heart is weak was wrong. Few things beat with as much force as the soul…

Wellness
He Who Faces Adversity Deserves the Strength

Life will hit you on more than one occasion, and at times it does so as hard as it can.…