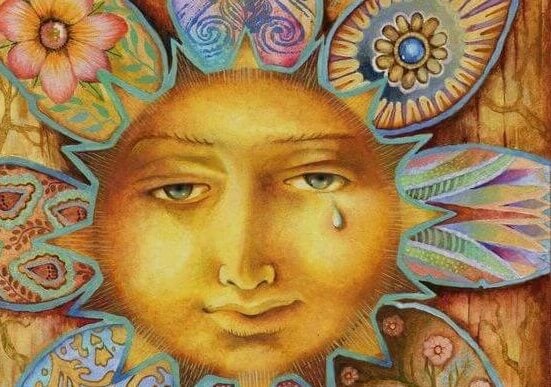 How often have I cried in secret without knowing that life was doing me a favor, without understanding that what had happened was not the end of the world, but rather the start of something better. Because the simple act of existence means starting again over and over again. It is about closing one window to open a door, while we wipe away the tears that we shed for those who didn’t deserve them in the first place.

Albert Einstein used to say that if there was one thing he was grateful for, it was all the people who had said “no” to him throughout his life. Each of the disappointments he had suffered because of those who refused to help him at that time, later on helped him to find the motivation to do things for himself. To be stronger.

Nobody knows how much I’ve cried nor how much those tears have taught me. Today I am the result of each and every one of those sobs that I’ve let out, not because I was weak but rather because I was tired of being strong…

There are times that we simply can’t take it any more. The emotional stress caused by so many disappointments and failures and by each “no” that we’ve met on the path makes us stop. It is then that the feeling of defenselessness arises along with the clear sense that we’ve lost control over our lives.

Judith Orloff, psychiatrist and author of the book Emotional Freedom: How to Liberate Yourself from Negative Emotions and Transform Your Life, tells us that the first step in cultivating inner balance is crying. After the tears comes the calm, and right after that, clarity. We invite you to reflect on that.

Crying over what we have learned: useful suffering

It’s quite likely that if right now you could travel back to your own past, you would feel compassion for yourself when seeing yourself cry for reasons that were never worth it. All those tears shed for those who never deserved our affection or for each moment of anguish over a project or dream that was never really worth it, are now indelible memories. Broken but useful dreams, engraved in the passing clouds of our life cycles.

That said, it is worth mentioning that nobody arrives into this world “factory-trained”. Tears are like rites of passage that we need to experience to keep on growing, to know who to say yes to and who to say no to, to test ourselves and to measure our strength.

In psychology, the concept of “useless suffering” is often talked about. It’s a term that particularly grabs our attention and, whether we like it or not, it appears more than we think. It refers to those moments when, the more conscious of our pain we are, the more we perpetuate it.

An example of this is those stormy romantic relationships where, far from freeing ourselves from the pain, we sink even further into the quicksand. While useful suffering has a purpose and enables us to let go of burdens to cleanse ourselves inside and out, useless suffering never gives way to mourning, to change, to inner growth.

After the pain comes the opportunity

It’s likely that you’ve often heard the expression “only someone who has suffered can understand what life is really about”. It is worth mentioning that this isn’t entirely true. Happiness also teaches us and also offers us adequate resources. However, adversity is also that crossroads on the journey that the majority of us will have to pass through at some point.

I too have cried over things that weren’t worth it, over dreams that were blown away by the wind and over sweet wishes that turned sour…

When we meet it, when we experience pain in any form, we won’t be the same afterwards. That’s why it’s necessary to encourage the “useful suffering” we talked about earlier, that which enables us to learn to be more skilled, to be better strategists with resilient minds and capable of seeing new opportunities. Because even if we think that life has given us a clear “no”, sometimes it’s really just a “wait a little longer”…

Judith Orloff teaches us that in order to be able to see the opportunities in dark times, it is necessary to generate adequate inner calm. Emotional release is a suitable and liberating mechanism to calm the mind and see things differently.

Once we’ve cried over a disappointment, a break-up or a failure, it is necessary to create change. However, a mistake we often make is to wait until something happens in our surroundings to find a reason to continue making progress and leave behind what has happened.

This is not the right approach. The correct thing to do is to “be the change ourselves”. Far from waiting for change from outside, you have to create it from the inside. Because just when you stop waiting and begin to react, life itself changes.

At the end of the day, it is in these moments of personal difficulty that we discover the true strengths that lie within us and what we are really capable of. Because whether you believe it or not, we are like oaks: the more the wind pounds them, the stronger they grow.

Psychology
Do What Others Say You Can't

Psychology
5 Things to Say to End Any Argument