Don't Blame the Stone You Tripped on, Watch Where You're Going 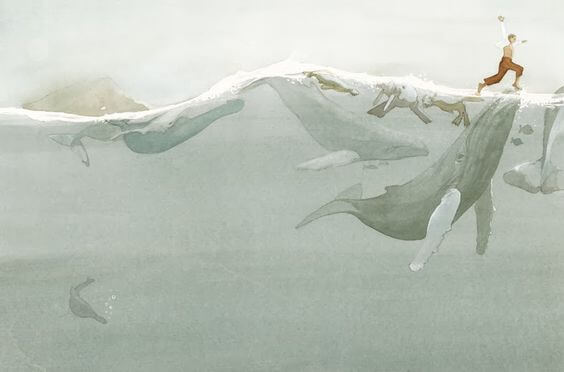 A few days ago, the poet Sara Bueno published a post that said, “when you stop blaming the stone [you tripped on], you’ll learn how to walk.” Do you see yourself in this quote? Maybe something happened to you that keeps running through your head like it just happened, and you don’t know how to leave that vicious cycle. Maybe it seems like all the forces that surround you are pushing you back into it.

When things don’t go well, the fearsome shadow of blame appears in one of two ways: either by blaming yourself and bearing the burden of the consequences, or by blaming other people or the situation itself.

While we will focus on the latter, it’s important to remember that neither manifestation of blame will allow you to learn or advance.

Life will never be as benevolent as we’d like it to be. Things always happen that seem unfair to us, that we think we don’t deserve, that we didn’t expect. So it’s easy to understand why blame occurs so frequently.

“Almost all unhappiness in life comes from the tendency to blame someone else.”

In fact, it’s well-known that, when a stone appears on the path ahead, people tend to curse the stone that’s preventing them from moving forward, or the person who put it there. It’s simpler, but not easier, to blame someone or something than it is to look one step further and find a solution.

We waste time trying to find the person responsible for the stone instead of finding a way to remove it. Seeking blame won’t help you. It won’t erase the damage that’s been caused; it will only press the blindfold against your eyes even harder.

Focus on the problem and get to the bottom of it

Even if you think there really is someone to blame, this still doesn’t show you the path that you have to follow so that you don’t remain stuck where you are. The most effective way to learn from the stone is not found in the stone itself, but rather in how it got there.

“The important thing in my view is not to pin the blame for a mistake on somebody, but rather to find out what caused the mistake.”

Try to focus on what happened to you, and be brave enough to get to the root of what’s hurting you, and you’ll figure out how to leave it behind. You’re stronger than that stone, and your life has the potential to be much more powerful than any obstacle that attempts to limit you.

While your breathing, you still have more time

Let it rain, open your eyes, and release your emotions. While you’re breathing, you still have more time. It’s just another stone, another experience, another part of learning.

It’s essential to hear what the stone is telling you, but avoiding carrying the weight of it for too long, especially because such a waste of strength is unnecessary. They say that the things you resist, persist, and you don’t want your continuous anguish to persist.

“[There’s no need] to weigh one’s thoughts down with the weight of one’s shoes.”

In short, your shoes have gone through a lot, and the places they’ve walked have left a mark on the soles, but your heart doesn’t have room for all that. It needs a filter that allows beneficial things to pass through, and blocks anything that would only take up space, waste energy, and cause harm.

It’s Not The Burden That Destroys You, It’s How You Carry It

Link copied!
Interesting Articles
Personal Development
The Benefits of Self-Respect for You, Others, and the Whole Planet

The fact that the world we live in can be improved is something that influences and moves many people. Most…

Wellness
I Promise to Give You Love

Wellness
"I Will Love You in Silence." A Place Where Words are Unnecessary

Many times, words are not necessary to show our feelings and affection. We are talking about the power of non-verbal…

Life is a journey. This metaphor has always been used to describe it, both in literature and in psychology. And we all know it's not exactly a straight and easy…

Healthy Habits
Kick These Four Habits that Affect Your Sleep

Emotional responsibility includes being accountable for not only our actions and behaviors, but also our thoughts and our feelings. In short, our existence. Throughout our lives, the majority of the time that…