What happens when someone in your family behaves badly? The black sheep effect explains how the other members of the family or group will behave towards the black sheep. 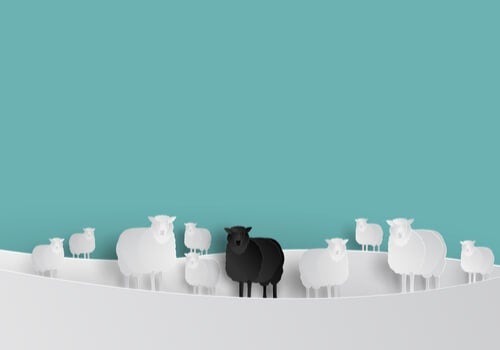 They say that there’s a black sheep in every family. It’s a metaphor that people use to describe those who are a bit different from the rest, those that don’t toe the line. These differences can be in their physical appearance, their preferences, or their behavior. Thus, being the black sheep of the family means being different from the rest of the family members and not quite fitting in.

The term black sheep always has a negative association. No one wants to be the black sheep of a group, as this brings accusations such as “outcast”, “deviant”, or “antisocial”, as well as other descriptions that imply that the person isn’t accepted. Furthermore, the term black sheep is also used to refer to scapegoats or those who bear the blame for others.

As you know, as humans, we all belong to different groups. One human tendency is to simplify the world in order to understand it more easily. In this way, people create different categories to place people in. By creating these categories, they also include themselves in one or more of them. This is what experts call the self-categorization theory.

By creating categories, you’re starting on the process of forming groups. By labeling those who share those categories, you’re including them as “members” of those groups. And, at the same time, you’ll also place yourself in some of those groups. According to the social identity theory, the groups you belong to will make you feel good. They’ll give you a sense of belonging.

“A family without a black sheep is not a typical family.”

However, what you’ll usually do is compare your group to what you consider inferior groups. The reality, though, is that this isn’t always possible.

Sometimes you’ll have to compare your group to superior groups, and that’s where you’ll lose out. Fortunately, there are different mechanisms that help you feel good about your own group, even when it’s inferior to other groups. The two best-known mechanisms are in-group favoritism and “other group” discrimination, both of which are part of in-group bias.

In-group favoritism consists of favoring members of your own group. You can do this by helping them more or holding them in higher esteem. In contrast, discrimination of other groups consists of devaluing those group members, which people often do through prejudice or discriminatory behavior.

The end result is that you’ll end up valuing the members of your own group more than those of the other group(s). But what happens when the “bad guys”, the black sheep, belong to your group?

What normally happens here? Well, in accordance with the black sheep effect, you can sometimes treat your group members more harshly on these occasions. In other words, if someone engages in offensive behavior, you’ll treat them worse if they’re a member of the in-group than if they were a member of another group.

A group that punishes those who deviate is seen in a better light than one that remains unmoved by the failure to comply with its rules. Therefore, the members of each group are responsible for making sure other members follow the group’s rules and punishing them if they don’t.

As the popular saying goes, “The one who loves you will make you weep”….or should we say “comply”?

The Fable of the Black Sheep and the Value of Honesty
Many of us have heard of the term the "black sheep", but do we really know where it comes from? Here is the real story, and what it has to say about honesty. Read more »
Link copied!
Interesting Articles
Social Psychology
Why do Children Imitate Adults?