The Rorschach Test - The Projective Test to Assess Personality

The Rorschach test has been around for almost a hundred years old. However, to this day (and despite the many controversies surrounding its validity), it's still one of the most interesting psychodiagnostic techniques. 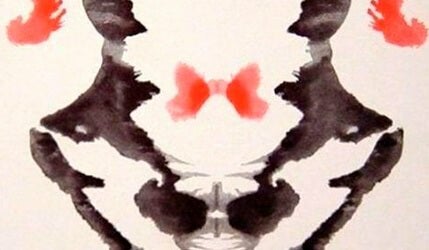 The Rorschach test is one of the best-known projective psychodiagnostic techniques. For some, it’s little more than a pseudoscientific tool. However, other psychologists believe that, despite being almost a hundred years old, this technique remains an interesting way to evaluate certain thought and personality disorders.

This test is an iconic part of pop culture. It’s appeared in movies, TV shows, and even comic books. In fact, the great Andy Warhol himself was fascinated by these mysterious shapes, and used them as inspiration for a series of works. However, popularity aside, few techniques in the field of psychology have aroused as much controversy or interest.

Psychologists such as Pieter Drench, an expert in psychodiagnosis, criticize the continued presence of the Rorschach test in many of our social contexts. Even today, it remains the second most common forensic test after the MMPI-2, the Minnesota Multiphasic Personality Inventory.

On the other hand, we should also note that, from 1999 until the present, this technique has been reviewed and analyzed on many occasions. In 2013, for example, an in-depth study was conducted by psychologist Joni Mihura from the University of Toledo, where it was concluded that the Rorschach test still has its merits.

However, it must be used appropriately. For example, it should never be the primary means of making any type of diagnosis. The Rorschach test is essentially a simple projective test and should be used as a complement to other (and perhaps more valid) psychological information-gathering strategies.

Who created the Rorschach test?

Hermann Rorschach was a young Swiss psychologist, who first discovered the field of psychoanalysis at the University Hospital Zurich, which was directed by Eugen Bleuler. As his father was a painter, he grew up around art and believed that it could help psychologists delve into the human psyche.

After meeting psychiatrist Szymon Hens in 1917 and reading his work on the use of inkblots to explore different aspects of personality, Rorschach used this theory to develop a technique that revolutionized the clinical world.

He called his technique Psychodiagnostik (Psychodiagnostic). The test was based on a series of cards, each featuring an ambiguous image that promoted the activation of unconscious processes in the brain. In turn, this allowed diagnosticians to explore a subject’s pathological personality. Initially, Rorschach was primarily looking for a test that would help psychologists detect schizophrenia.

It should be noted that Hermann Rorschach never had the chance to improve his technique, nor did he ever see the long-term impact it would have. This is because he died just nine months after presenting his new diagnostic test.

“The mind is like an iceberg; it floats with one-seventh of its bulk above water.”

What does the Rorschach test consist of?

When it comes to the Rorschach test, there are a number of important aspects you should understand. Firstly, despite being almost 100 years old, psychologists continue to use it to this day. Over the years, it’s been revised and transformed on numerous occasions. In the 1960s, for example, psychologist John Exner devised a rigorous methodology to standardize the test and its results. To this day, the Rorschach test is characterized as follows:

The Rorschach test consists of 10 inkblot images. Some are black and white, some are gray and white, and others are in color.

It’s important to remember that Hermann Rorschach originally designed this test to help detect schizophrenia. However, in 1939, this goal was changed and has remained the same to this day: a projective personality test – a type of psychological test to analyze emotions, motivations, and thoughts.

We want to make one aspect very clear: it isn’t just what the interviewee sees that matters, but the overall assessment the psychologist or psychiatrist carries out during the course of the test. In other words, not just their answers are important. The interviewer will also study their reactions, as well as their ability to communicate, explain, and respond. In other words, they have to consider a complex set of factors and stimuli.

Aspects to consider when conducting the test

When using this technique, professionals must observe and analyze several other factors, including:

How valid is the Rorschach test?

The study conducted by Dr. Joni Mihura we mentioned at the beginning of this article shows us something important. The Rorschach test isn’t a valid means for diagnosing personality disorders. In fact, the medical community even called for a moratorium of its use in 1999. In fact, it shouldn’t be used as a diagnostic technique until they obtained more concrete information on its validity.

To date, the Rorschach test has only proved effective in one area: evaluating psychosis. Beyond this, many experts often regard it as little more than a relic in the world of psychology. To conclude, there’s one last important aspect to bear in mind. For all its flaws, the Rorschach test continues to be a useful projective test. Despite not being the perfect diagnostic tool, medical professionals may be able to use it alongside other methods to gain greater insight into the minds of their patients.

5 Personality Tests, Compared and Contrasted
Although personality is certainly hard to measure, and there are dynamics that make each individual unique, personality tests are more useful than we think. Read more »
Link copied!
Interesting Articles
Clinical Psychology
Rollo May: The Father of Existential Psychology