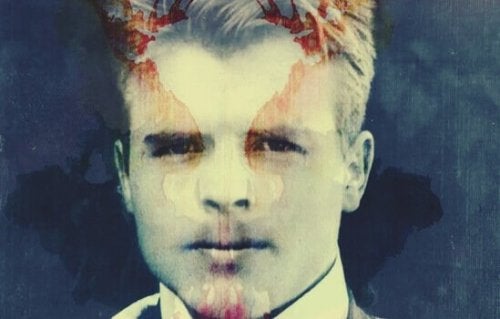 Hermann Rorschach was a physician and psychiatrist who belonged to the first generation of Freudian psychoanalysts. He became famous throughout the world for a noted test that bears his surname: the Rorschach test, better known as the inkblot test.

He was born in Zurich (Switzerland) in the year 1884 to a humble family. His father was a modest painter, who made his living by giving private art lessons. Hermann Rorschach also showed interest in drawing from an early age. He really liked a technique called “flexography“.

“Diagnosing is naming the patient’s suffering.”

Hermann Rorschach was fond of playing a game that consisted of filling a paper with ink and then folding it. He would get singular and funny figures. For that reason, his own companions nicknamed him klek, which means ‘stain’.

Hermann Rorschach hesitated about the profession he wanted to practice. Although he was interested in biology and also in art, he ended up choosing medicine. He got his degree in 1909 and immediately opted to specialize in psychiatry.

During his psychiatry studies, he had prestigious psychoanalysts such as Eugen Bleuler and Carl Gustav Jung as his teachers. Hermann Rorschach got excited about psychoanalytic ideas and didn’t abandon them. He found the subject of diagnosis especially interesting. He was the one who coined the word “psychodiagnosis”.

Later on, he became a patient care assistant in several hospital centers. Sometime after that, he became the director of asylums such as Munterlingen, near Lake Constance, Munsingen, near Bern, and Herisau, in the canton of Appenzell. This broad clinical experience helped him design his famous test.

During those years, he read The Romance of Leonardo da Vinci by Dmitry Merezhkovsky that was published in St. Petersburg in 1902. A passage in which one of the characters, called Giovanni Boltraffio, follows some humidity spots really drew his attention. The text states: “Often on the walls, in the mixture of stones, in fissures, in the mold drawings of stagnant water… I have found similarities with wonderful places, with mountains, with steep peaks, etc.”

Hermann Rorschach’s life was short. He died when he was only 38 years old. During his last three years of life, he wrote the work that’s still remembered to this day. It was titled Psychodiagnosis and was published in 1921. In it, Rorschach defined the basis of his test, which he called “projective”. He pointed out that his purpose was to explore people’s imaginary representations, asking them to verbally express the associations they made in relation to some drawings.

Previously, Rorschach had studied sleep, delirium, and hallucinations in detail. Although he was always a Freud follower, there’s a clear Jung influence in his concepts and language. He looked for the internal images and traces of civilization in his patients’ responses.

He managed to summarize everything in 40 images that are apparently “spots”. The patient observes them and says what they seem to see in them. Nowadays, psychiatrists and psychologists only use 15 of these images when they apply the Rorschach test. At that time, the main objective was to determine if the patients were neurotic or psychotic.

Clinical psychologists widely use the Rorschach test as a diagnostic tool. Currently, it has more applications than just determining if a patient is psychotic or neurotic. They range from the identification of main personality traits to job evaluation tests.

Forensic specialists also use this test frequently. This is because specialists who defend its value believe in an idea: the interpretation of the sheets is beyond rational control. Therefore, the people to whom it’s applied would hardly manage to manipulate the results. Thus, the Rorschach test reveals deep aspects of their personality. This is why it’s still used today.

Hermann Rorschach made great contributions to psychology and psychoanalysis. He never managed to complete his work, since he died while he was still developing his technique. But even so, it marked a before and after in the exploration of the human mind.

Karl Koch’s Tree Test
Dr. Koch chose this figure for his diagnostic Tree Test because of the symbolism trees have. All cultures, all countries, trees are a mythological and emblematic figure that is entwined with human beings. Trying to capture them, trying to draw them is almost like taking out everything that we carry inside... Read more »
Link copied!
Interesting Articles
Literature and Psychology
Letters to a Young Psychologist by Ignacio Solares

Culture
It All Started With A Strong Headache: What Is a Stroke?

The concept of validity has evolved over the years. Previously, experts believed that a test was valid for anything it…