The Psychology of Smell: Three Smells that Change Attitudes

The sense of smell is very interesting. Undoubtedly, it can bring pleasure and excitement. However, it can also bring a change in attitude. How is this possible? 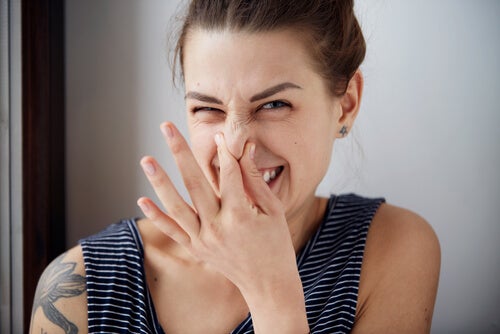 According to social psychologists, several physical sensations have curious effects on mental experience. More specifically, the psychology of smell has studied the influence that a specific scent has on a person’s behavior.

The psychology of smell establishes that smell is a physical sensation capable of shaping how an individual responds to stimuli. In addition, it determines if they like it or not. Shakespeare wrote, “A rose by any other name would smell as sweet”. Now, if no one can smell it, does the rose lose its sweet scent?

Well, perhaps. This could also happen to the person you just came across and that brightened up your day on the subway. This is because that sweet, intoxicating, and fresh trait is linked to it. The psychology of smell states that smell is a sense related to memory, emotions, and nostalgia.

The psychology of smell: scents that cause a reaction

The book The Scent of Desire: Discovering Our Enigmatic Sense of Smell by Rachel Herz is quite interesting. It’s perhaps the most relevant book that’s ever been published in recent years on the psychology of smell. This book talks about the importance of smell in our daily lives. It also analyzes how it influences important fields, such as food and reproduction.

Smells are physical sensations that mediate mental experiences. Even when you’re not aware of a smell in the environment, it can subtly guide your thoughts and judgment in surprising ways. In this article, we’ll share three examples of this. Check them out!

An article by Spike Lee and Norbert Schwarz presented seven studies that showed a link between smelling “fishy” and social suspicion. You’ve probably heard someone say something along the lines of “It smells like rotten fish” to refer to a phenomenon or entity that seems suspicious, shady, or unreliable.

They arrived at this conclusion after several interesting studies in which they evaluated people’s critical expressions. Lee and Schwarz argue that the existence of this metaphor reflects something important; the mental link between the actual physical sensation and the feeling that something’s happening.

Playing with a fishy smell in the background

In one of their studies, people played in a room and the course of the game depended on whether or not they trusted their partner. When people played this game, they’d sometimes put a slight fishy smell in the air. They made sure to stick with this type of smell so they’d make it a bit different from time to time.

During the game, they wanted to see how much the players trusted their teammates. When people played in a room with a slightly fishy odor, they played in a way that suggested they didn’t trust their opponents. On the other hand, when there was another bad smell present, they didn’t seem as suspicious.

Roger Dooley, on his neuromarketing blog, made an interesting suggestion based on this research. According to him, it’s wrong to have business meetings at seafood restaurants. Believe it or not, the people you’re dealing with may associate the smell of shrimp with a hidden agenda.

We’re now talking about an article in the American Psychologist journal titled “Smells Like Clean Spirit. Nonconscious Effects of Scent on Cognition and Behavior”. In it, researchers studied the effects aroma had on cognitive processes and behaviors.

Two studies tested and confirmed that when participants were exposed to a citrus-scented cleaner, there was an improvement in the accessibility of the concept of cleanliness.

The researchers drew this conclusion from observing the quickest identification of cleaning-related words in a lexical decision task. There was also a higher frequency of listing cleaning-related activities when describing expected behaviors during the day.

Finally, a third study established that mere exposure to the scent of multipurpose cleaner caused participants to keep their direct environment cleaner during an eating task.

As part of the study, the participants were taken to a room where they had to eat a cookie right after having spent time in a room that contained the aroma of citrus cleaner.

Something very interesting happened. On one hand, those who had spent time in the clean-smelling room continued to clean cookie crumbs from their desk in the second room. On the other, those who weren’t exposed to the cleaner smell didn’t. In a way, they’d been “subliminally” exposed to the “clean” scent.

The psychology of smell: fart, disgust, and moral judgment

What we’ll be talking about next may seem like a joke. However, we’re dealing with pure science here. Some researchers have used fart-smelling sprays as a subtle environmental way to make people feel disgusted.

It turns out that disgust is an emotion that can influence moral judgment. When a person feels disgust based on physical sensations, it’s possible that they’ll confuse it with feeling disgusted by someone’s behavior.

In one set of studies, researchers used a spray fart to induce mild, unconscious disgust. As a consequence, this made people make more severe moral judgments.

The process was simple. Before the study began, they sprayed some of the product into a trash can near the survey area (in other conditions, it didn’t smell).

As people sat in the room to conduct the survey, they answered questions about how extreme their moral judgment was about some specific acts that could be considered immoral. For example, the researchers would ask “How moral or immoral do you consider consensual sex between cousins ​​to be?”

The Smell of Coffee Improves Cognitive Functions
Coffee helps keeps us sharp and perform well. But it seems like even just the smell of coffee can have similar effects in our brain. Read on! Read more »
Link copied!
Interesting Articles
Social Psychology
The Importance of Volunteers in Crisis Situations

Social Psychology
Resisting the "Happycracy": Let Me Have a Bad Day

Positive psychology came along in the 90s with the work of psychologist Martin Seligman. He defined it as "the scientific…